There are only a few figures in music whose work influences and shapes a genre as a whole. This is definitely the case with the late Swedish pianist Esbjörn Svensson. With his trio e.s.t., he wowed audiences beyond age and genre affiliations. And his influence on jazz as a whole still reverberates to this day.

By the early 2000’s Esbjörn Svensson and his trio had became one of the greatest exponents of Nordic jazz, touring widely throughout Europe, the United States and Japan. Their albums Good Morning Susie Soho (2000) and Strange Place for Snow (2002), drew the attention of United States audiences and the trio holds the honor of 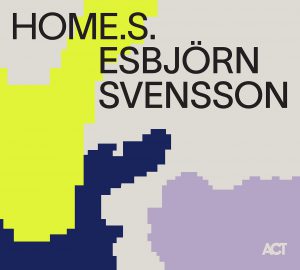 being the first European ensemble to grace the cover of Downbeat Magazine. June 2008 tragedy struck and Esbjörn died in tragic scuba diving accident. Prior to the accident the trio recorded a great deal of music during a 9-hour jam at 301 studios in Sydney Australia. The music from this session was released posthumously in September 2008 on their album “Leucocyte” and in 2012 another album was released with music from that same recording entitled 301.

Now some 10 years after 301, ACT records is poised to release “HOME.S” This album is Esbjörn’s only solo album and the sheer existence of such a recording and its completely unexpected discovery over a decade after its creation are nothing less than a sensation: Since the early 1990s, Svensson focused almost his entire creative energy and recording activities on his work with e.s.t.. Thus, these new recordings are not only the first, but practically the only ones that show Svensson in a setting other than that of the trio: Intimate, concentrated, and completely one with himself. The recordings for HOME.S. were recorded at his Swedish home only a few weeks before Esbjörn Svensson’s his untimely passing.

For almost ten years, the album rested untouched in his wife Eva’s personal archive. Eva called this album a “message smuggled across the border, carried by love, space, time and never-ending creative power.” In this interview, done with ACT Records, she tells the story behind the discovery of the album and the music:

ACT: How exactly did you find this music?

Eva Svensson: After Esbjörn’s passing, I made sure all the contents of his computer were saved to backup hard drives. And then I basically left them untouched for the next ten years. At the point where I eventually felt ready to look into the material, I soon realized that there was something I wanted to look into. I took the hard drive and went to Gothenburg to meet with Åke Linton, the sound engineer who had worked on all e.s.t. albums as well as on their live shows. He was also the one who had helped me to save the material from Esbjörn’s computer in the first place. So he probably already knew that there was something hidden in there. But nobody had listened to it.

We went to his studio. And we pressed the start button. Then there was total silence and we couldn’t speak for the entire time the music was playing. After it finished, at first we were not able to say anything, because we were both so touched and surprised that it was all there and that it was so beautiful. The tracks seemed to follow one another like pearls on a string. After we had just sat there for a while we agreed: This is really good. Musically, but also from a sound perspective.

At first, Åke wasn’t sure if Esbjörn had recorded everything at home and just by himself. So he called different studios in Stockholm that he knew Esbjörn was in contact with and asked them whether he had been there, recording anything. But no, he hadn’t been anywhere. I know he had bought some very nice microphones and in the course of touring had learned from Åke how to use them. So it became clear that this music had to have been played and recorded in the basement of our house.

ACT: So there was nobody with him? He was all alone doing that?

ES: He was all alone. In retrospect, I have been thinking about it because the few people who know that this exists were asking me if I knew about it. What I did know was that Esbjörn was constantly working, as he always did. He was in the basement, and I could hear him play. But to me, this didn’t raise any questions. Is he doing something? Yes, of course, he’s doing something. That’s what he always did. Rehearsing, practicing, composing. But for me, it wasn’t clear that something new was happening. I did know that he was longing to have time to compose and play in different kinds of constellations, but I had no idea that it might be solo piano.

Just weeks after making these solo recordings, Esbjörn died. Everything suddenly took on another perspective. There was no way for me to focus on music. All I could do at that time was to make sure all the material he was working on was kept safe.

ACT: When did you hear the music for the first time?

ACT: This was really the first time?

ACT: And you kept everything safe and untouched until then?

ES: Technically, yes… Well, I don’t know about safety, because it was in the cupboard. *laughs*. But safe enough to be released now anyway. Life changed so dramatically after Esbjörn’s passing. For me and for us, it was not just Esbjörn, the musician, it was my husband and the children’s father who was gone. That was what we had to deal with and find a way to live without.

ACT: What made you choose that the time was right to share this with the public?

ES: It was really not about choosing the right time. When I heard the music, I simply understood that it was important for me that it happened. To be able to hear it and to have it physically in my hands. And when I realized this, I also wanted to share it with more people. By making an album and having it released, but also, just as importantly, by creating some spaces for myself and for others, to meet and to listen together and to hear the voice of Esbjörn.

ACT: Do you know where the repertoire of the record comes from? Has any of this been previously written or do you think it’s fully improvised?

ES: I think individual tracks and compositions were prepared. At least I am sure there were some kind of sketches. I don’t think Esbjörn was just sitting down improvising from start to end. It was not how I remember that he worked. There is actually a lot of sheet music around and I am sure some of it is connected with this recording, but I wasn’t able to go through all of it. Yet.

ACT: You decided to have the tracks to be named after the letters of the Greek alphabet, and one reason to do so is Esbjörn’s passion for astronomy. Something that also inspired one of e.s.t.’s most popular pieces “From Gagarin’s Point of View”. There is this feeling of being far away from everything, in zero-g with a totally different perspective. And at the same time at great risk.

ES: Yes, I could imagine that Gagarin’s adventure and his urge to go to new places must have been so much more thrilling to him than his fear of death. To take that leap out into the universe and take that risk, as opposed to just staying home. I don’t think that was an option. In a musical way, Esbjörn was just like that. This is probably why the stars and space were such a big deal for him and what fascinated him about astronomy. At the same time, I remember that he said that he in some way regretted that he learned more about it because then some amount of the mystery was gone.

He was always keen to look into things that he didn’t know that much about. And then in a way try to find out how they work and how they’re connected to other things. In life and in music. He heard something, but he didn’t know how to connect it. And then he, and also Dan and Magnus of e.s.t. would explore things together, without any outside guidance. From their childhood days, they would just meet at Esbjörn’s house, play around, explore and find things out.

Esbjörn knew the Greek alphabet by heart and also all of the Greek Zodiac signs. So along with this being a metaphor for the desire to explore and discover new spaces, by naming the pieces on the album just by Greek letters, we are not explaining something that we don’t want to explain, and we leave space for the listeners to find their own associations with the music.

ES: When the solo piano recordings were found at our home it felt like getting a message smuggled over the border. This music is like having Esbjörn’s voice in the room. It couldn’t be anybody else that played. Never. It is his voice. And he still has something to say. And I’m having the chance to let people hear that. My feeling is that we’re doing this together.

Thank you Esbjörn. This is beautiful.

HOME.S will be released by ACT Records on the 18th of November and will be available on CD, vinyl LP and all streaming platforms.