Producer Zev Feldman is well known in the jazz world for his work in tracking down previously unreleased recordings from some of the most iconic musicians throughout the history of jazz. Take for instance the the Nat King Cole box set, a large-scale collection of the pivotal early recordings (1936-1943), The series of releases from Bill Evans, Wes Montgomery, Sonny Rollins and the list goes on. Recently Zev announced his latest initiative, a new label venture with the name, “Jazz Detective”.

Taking its name from Feldman’s handle “the Jazz Detective”, the label will be an imprint of Deep Digs Music Group, a partnership with Spain’s Elemental Music, with which Feldman has enjoyed a long professional relationship. Feldman says, “Deep Digs Music Group is a new archival record company that embodies my love and care for archival music around a variety of different genres. Jazz, to no surprise, is an enormous part of the fabric of the company, and the newly formed Jazz Detective imprint will focus on releasing previously unissued jazz treasures.”

The first outings under the new imprint will be the release of two deluxe limited edition double-LP volumes: Emerald City Nights: Live at the Penthouse (1963-64) and (1965-66), featuring previously unreleased performances by master pianist Ahmad Jamal. “It’s an enormous thrill for me to be working with Mr. Jamal, whom I’ve been listening to my entire life. He’s a true original and beyond category. I couldn’t be more proud of this new endeavor and these releases.” continued Zev.

The vinyl sets will be issued on 180-gram discs transferred from the original tapes and mastered by the legendary Bernie Grundman. The music will also be available as two-CD sets and downloads on December 2. A third two-LP volume devoted to Penthouse recordings from 1966. 68 will be released at a later date. All the packages have been produced by Feldman and supervised by Ahmad Jamal himself.

The new label’s premiere offerings feature performances recorded at the intimate Seattle club Photo by Don Bronstein The Penthouse by local radio host and live broadcast engineer Jim Wilke. Other magnificent live sets from the venue produced by Feldman have been released by Resonance Records (Wynton Kelly and Wes Montgomery, and the Three Sounds) and Reel to Real Recordings (Cannonball Adderley, Harold Land and the duo of Johnny Griffin and Eddie Lockjaw Davis). On the Penthouse recordings Jamal is heard in his three-piece element, backed by bassists Richard Evans and Jamil Nasser and drummer Chuck Lampkin on the 1963-64 shows and by Nasser and drummers Lampkin, Vernel Fournier, and Frank Gant on the 1965-66 dates.

In 1958, the pianist became a household name — a rare feat for a jazz pianist — with a pair of live trio recordings that soared into the top reaches of the American record charts. Ahmad Jamal Trio at the Pershing: But Not For Me, cut live in the lounge of Chicago’s Pershing Hotel, reached No. 3 nationally in the year of its release; its successor Ahmad Jamal: Volume IV, captured at the Spotlight Club in Washington, D.C., climbed to No. 11.

In his overview of the National Endowment for the Arts Jazz Master, Kennedy Center honoree, and Grammy Lifetime Achievement Award recipient, writer Eugene Holley says, “Pittsburgh-born Jamal has achieved jazz immortality in a myriad of ways: A child prodigy trained in European and American classical traditions who was professionally working at 14, Jamal developed a protean and profound pianism that ingeniously melded pianist Art Tatum’s swing-at-the-speed-of-sound and his hometown hero Errol Garner’s tender and torrid touch with Franz Liszt’s boundless keyboard technique and the azure French Impressionism of Ravel and Debussy.” 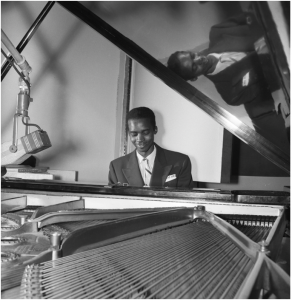 Though Jamal has recorded prolifically in a variety of settings — his most recent album Ballades, a studio session he released in 2019 at the age of 89, comprises solo and duo piano-bass recordings — he has always stated his preference for a live environment.

“There’s no comparison between performing live and performing in a studio,” he says in the new Emerald City Nights collections. “That’s art — performing remotely, not in the studio. It’s all live, but remotely from the studio is a science and an art. If you can capture that, as some of us have, you always come up with spectacular things, in my opinion. Being in a studio has its constraints, has its difficulties. When you’re performing remotely, away from the studio, it’s a different thing altogether. All you need is a good engineer.”

While Jamal may not be a household name under the Millennial and Gen X jazz fans, there’s no doubt that he has had a huge impact on the development of jazz over the years. The recently past legend, pianist Ramsey Lewis, who also racked up his own top-10 albums on Argo in the ‘60s, said “With many jazz piano players, the left hand comps and the right hand does a lot of work. Well, we all do that, but there are also many times during that song or other songs during that show that we don’t say, ‘Look, ma, one hand.’ We’d say, ‘Look, ma, both hands.’ And Ahmad is one of the both-hands piano players. Left hand, right hand: Ahmad can take care of the business.”

Feldman’s releases are not only unique from a sonic perspective but also for the way that he goes beyond the norm to place the recording fully in context. The Booklet’s are always extensive and present background information from those involved with the production. These new releases are no exception and the Both Jamal packages include extensive booklets with new reflections by Jamal about his work; photographs by Don Bronstein, Chuck Stewart and others; and essays by Feldman, Wilke, journalist Eugene Holley, Jr., Charlie Puzzo, Jr. (son of late Penthouse owner Charlie Puzzo), and Marshall Chess of Chess/Argo/Cadet Records (the label that released Jamal’s bestselling, career-making albums in the ‘50s). The 1963-64 volume includes new interviews with Jamal’s hit-making contemporary and Argo label mate Ramsey Lewis and Japanese pianist Hiromi, while the 1965-66 collection contains interviews with 2022 Grammy Awards album of the year winner Jon Batiste, veteran pianist Kenny Barron and virtuoso Aaron Diehl.

In the booklet, Hiromi, who brought Jamal to Japan to perform on tour, says, “What I really learned from his playing is when you improvise or when you write music, you have to tell stories. Jazz improvisation is made of a lot of scales and chord progressions and everything you can learn from the book, but something that you cannot learn from the book is telling your own story. And whenever he plays, I always feel he’s telling his story of life. And that’s how I want to be.”

Jon Batiste, who first encountered Jamal when he was a 19-year-old phenom touring Europe for the first time, says, “When you hang with him, you realize he’s a spontaneous composer, in the same way that someone would improvise a solo. He has the ability to compose at that level of hyper-speed. He’ll sit down at the piano and he’ll play something when you’re hanging out and it’ll just be him messing around, if you will. From that will come an incredible composition.

You’ll ask him, ‘When did you write that? When did you compose this incredible composition that we just heard?’ He’ll, oftentimes, say, ‘Oh, just now. I just played that right in this moment.’ Typically, when he’s in a state of performance, he has the freedom and the mastery to do that.”

Homing in on an important element of Jamal’s style, veteran Kenny Barron says, “He leaves a lot of space for the rhythm section. And one of the things that’s nice is sometimes he’ll play an idea, and in the next course you expect him to play it again, except maybe he won’t, and the rhythm section plays. So he leaves all of this space for the rhythm section to either finish an idea or complete it. And it’s really nice. It’s like he kind of orchestrates the piano, kind of orchestrates everything. It’s just so beautiful to hear.”

However perhaps one of the best testimonials that underpin Jamals influence comes from Miles Davis, who was one of Jamal’s most ardent champions. In his 1989 autobiography Miles put his finger on the abiding qualities that one hears in Jamal’s music, and on the vibrant performances on Emerald City Nights: “He knocked me out with his concept of space, his lightness of touch, his understatement and the way he phrased notes and chords and passages….I loved his lyricism on piano, the way he played and the spacing he used in the ensemble voicing of his groups. I have always thought Ahmad Jamal was a great piano player who never got the recognition he deserved.”

The Two Volumes of Emerald City Nights: Live at the Penthouse, 1963-64 and 1965-66 will be launched on Record Store Day’s November 25 Black Friday independent retail event. Further on the 2nd of December the label will release the albums Two-CD Sets and Downloads.

Editorial Side note:, Blue Note Records have also recently released the news of the coming release of another Zev Feldman production, Elvin Jones “Revival: Live at Pookie’s Pub” with Joe Farrell, Billy Greene and Wilbur Little captured live in NYC on July 28-30, 1967, just 2 weeks after John Coltrane passed. This set is due for release on the 18th of November and we will be paying attention to this release here on Jazz In Europe in the coming days.