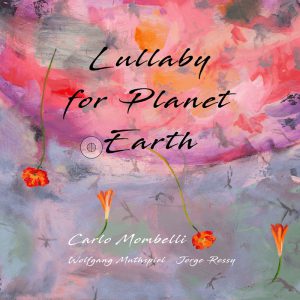 CYH’s mission is to create a “modern progressive label that brings together a diverse community of artists who share an appreciation for music that is unique, creative, and crafted with care.” Having previously released music from Anicia Kohler, Fabian Willmann and label co-founder Sarah Chaksad, Mombelli’s Lullaby For Planet Earth fit’s perfectly within the label’s artistic concept where jazz is seen as a philosophy more than a genre.

In his 40-year career as a bassist, bandleader, composer and writer, South African Carlo Mombelli, who currently lives in Johannesburg, has built bridges between genres, musicians and audiences. In addition to his more than 100 recordings, his projects include compositions for ballets and for more than 14 films, which have been shown at MOMA in New York, in Berlin, Toronto and at the Sundance Film Festival, among others. In the documentary “Sharp Sharp,” filmmaker Sylvie Coulon portrays a project of Mombelli’s in which he builds instruments from recycled materials with children in workshops in Soweto and Mamelodi.

“I don’t force notes, I wait for the composition to arrive naturally. My compositions come from stories and events, feelings and my environment, which is a South African one. They evolve from my need to reach beyond my edge and seek beauty among my angels and demons,” wrote bassist Carlo Mombelli, born in Pretoria in 1960, about one of his projects.

The description also applies to Lullaby For Planet Earth: the ten songs develop in a natural-seeming matter-of-factness, in a fascinating balance of space and calm, tension and emotionality. The rhythmic mesh, the melodic interplay, the finest, densest dialogues and the thematic urgency in the trio’s common language unfold a primal power of touching tenderness: the lullaby for a world as threatening as it is threatened.

The video above is part of the South African “House on the Hill” Jazz Community Showcase series and recorded in November 2020 in Sophiatown. The video presents much of the music that appears on the album however with a different line-up. The video features Marcus Wyatt (trumpet), Keenan Ahrends (guitar) and Ayanda Sikade on drums. The album was recorded almost a year later in CYH studios in Basel with Wolfgang Muthspiel and Jorge Rossy.

In Wolfgang Muthspiel and Jorge Rossy, Carlo Mombelli has two congenial partners whose qualities are world-renowned: The guitarist’s playing gives every sound the appropriate temperature and atmosphere, virtuosity, drive and immediate presence. The drummer is characterized by a similar quality, whose rhythmic thinking corresponds to a holistic musical thinking and who here not only, but especially also with the vibraphone, sets contrapuntal signs and altogether creates connections to the stringed instruments that seem to follow a musical golden ratio in a dreamlike way.

Not only the wonderful compositions, but also the playing qualities of Carlo Mombelli himself, who, to name only the most famous, has worked with greats such as Mick Goodrick, Charlie Mariano, Egberto Gismonti, Lee Konitz, Marcus Wyatt and Miriam Makeba, unfold masterfully: his magical timing, the dark colors of his electric bass and sometimes here, sometimes there – and next to that of Wolfgang Muthspiel – the wonderful breeze of his surprisingly bright singing voice, paired with his own energy and presence and the musical feeling for the whole: in all the demons and angels, the beauty of this music and – connected to it – the hope as Lullaby For Plant Earth can be found as inspiring as it is unmistakable.