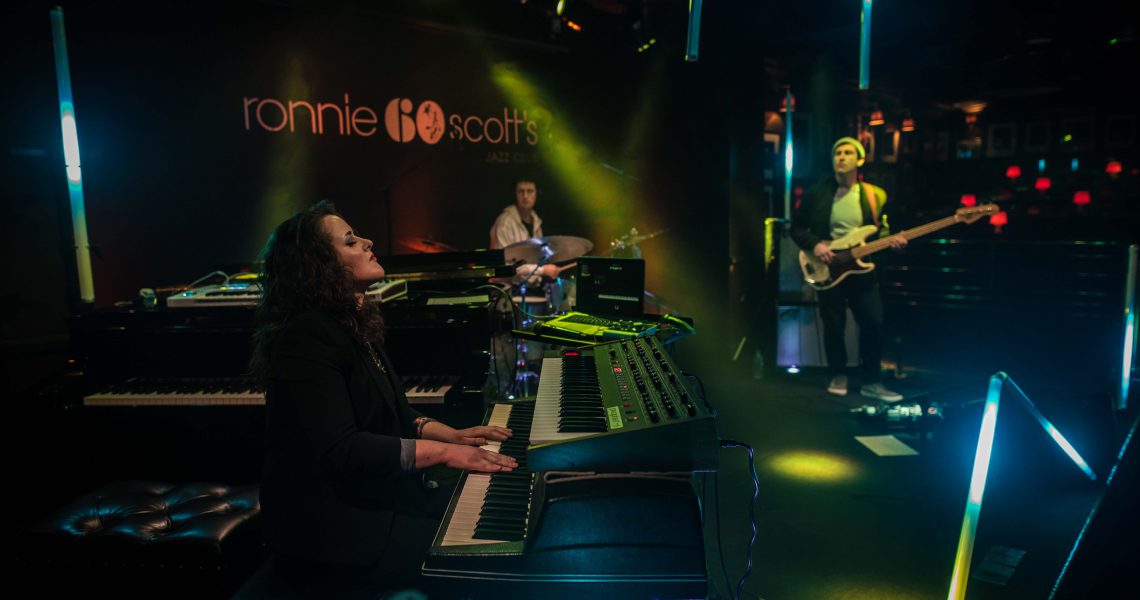 Something New: ‘Luma’ with Emily Francis 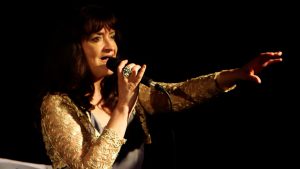 Welcome to our Women in Jazz Media series ‘Something New with Esther Bennett’. Exploring new albums through conversation directly with the artist to share a little insight into their work. As one of the London Jazz scenes’ most experienced, highly respected and widely loved jazz vocalists, Esther juxtaposes sensitivity and a sparky sense of humour in all her work and we are thrilled to have her involved in this new series to help platform new female led jazz releases across the world.

‘The Emily Francis Trio consists of Emily Francis (Keyboards), Trevor Boxall (Bass) and Jamie Murray (Drums) and their debut album, 2015’s The Absent, established their fresh take on the piano trio format, creating a sound with a strong emphasis on melody and groove, resulting in compositionally rich, original music. The group have performed extensively across the UK at prestigious jazz festivals and venues including Manchester Jazz Festival, London Jazz Festival and Ronnie Scott’s. They will be launching new album ‘LUMA’ at a special launch event on Thursday 21st April at Ronnie Scott’s’

Esther talks to Emily Francis about her new single ‘The Kite & the Crow’ and upcoming album ‘Luma.

EB: I’m blown away by your music and the trio.  Where are you from? Where and how did you learn and study and what you did do (music wise) before the trio? 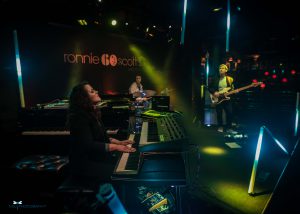 EF: Thank you for the kind words! I’m originally from the Wimborne area of Dorset and it was clear from an early age that music was going to be a big part of my life. I formally started playing electronic keyboard at age 7 and saxophone age 9, adding a few extra bits here and there as I went along, such as vocals, classical piano and flute. I tried oboe and clarinet, but they didn’t stick! I was always immersed in music coming from a very musical family. My Dad is a great singer/guitarist and my brothers both played drums and guitar. My secondary school was excellent for all thing’s arts related and we would put on professional musicals every year in the local theatre. As well as this I spent many years playing Alto Sax with the Bournemouth and Dorset Youth Jazz Orchestras, which opened up many opportunities, including playing the Royal Albert Hall. In my teens I became obsessed with Quincy Jones and was adamant I wanted to be an arranger/producer, however as an 18 year old I didn’t really know what that was supposed to look like as a degree, so I opted for a composition course at London College of Music. After realising all I was doing was hanging with the jazz musicians, I was encouraged to change course and specialise in jazz piano, which was definitely the right move! I was fortunate enough to study piano with both Eddie Harvey and Pete Saberton.

EB: Why these guys? (apart from the obvious – that they’re brilliant) What is it about them that suits you and your projects?

EF: Fundamentally we have a shared love of similar music and are always encouraging each other to push beyond the “easy way out”. Playing multiple keyboard parts when we could just add more band members is a prime example of that haha! Trevor and I met over 10 years ago playing in wedding bands and dug each other’s playing and musical tastes. I had a few people around me that were encouraging me to start my own thing, but it was Trevor that gave me that nudge to fully commit. When Jamie was introduced to us a few years ago, he instantly understood our emerging New York influences and after a lot of hard work and experimentation, I’m proud that we have settled on a very unique sound.

EB:  Regarding the prog rock, psychedelia and electronic music influences on this track, what is it about these genres that appeals to you and how do the musical components of these genres relate to jazz? 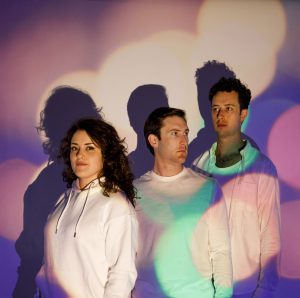 EF: For me personally, as well as having a strong upbringing on funk and soul, a lot of my school friends and early bands loved rock music and had a particular penchant for all things “fast”. Jordan Rudess from Dream Theater was an early influence, however once I discovered Porcupine Tree and Steven Wilson, I was hooked. His influences stem more from the cinematic Pink Floyd side of prog rock, but he’s also a big jazz fan, and like most prog, it is not short of extended instrumental sections and improvisation. His keyboard player Adam Holzman also played with Miles Davis and definitely incorporates a Mahavishnu Orchestra style sound with his use of ring modulation. After seeing a rig rundown of his equipment, I knew I had to get myself a mooger fooger ring modulator, which I use live with my wurlitzer. After discovering American jazz keyboardists Jason Lindner (Now vs Now), Adam Benjamin (Kneebody) & Henry Hey (FORQ), I was instantly blown away. I’d never heard keyboards being played like it before. Their bands had a sound that really resonated with me and after struggling to find a clear voice for our music, suddenly realised that I should embrace my skills as a keyboardist and the experimentation began soon after.

EB: In terms of more historical and obvious jazz influences, I’m hearing – Joe Zawinul, Wayne Shorter and Metheny. Am I right? Can you elaborate upon and/or correct my assumptions?

EF: A lot of people have mentioned Zawinul and I definitely listened to him when I was younger, but I think I was more in the Herbie Hancock & Wayne Shorter camp. I loved the Headhunters and Thrust era stuff, but back then it was mainly all about the funk! I’ve always really enjoyed playing “Beauty And The Beast” by Wayne Shorter. Metheny is a good spot! He isn’t someone I listen to very regularly, but definitely had an indirect influence. My first introduction to Metheny was in my late teens and my teacher at the time encouraged me to learn the tune “In Her Family”. I absolutely loved the unexpected harmonic moves, and how the melody has so much space to breathe. More “old school” influences include Count Basie, Bill Evans & Keith Jarrett. 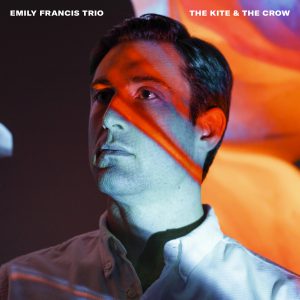 EB: I’m loving the use of different time signatures for ‘The Kite & The Crow’ track. Can you break those down a bit for the educated listener? We love to know this type of stuff!

EF: Ok, if you insist! Trev was the main composer of this tune and initially came to me with the bassline and it was an extremely difficult tune to get inside of. It ended up being three different sections all of which had different tempos with changing time signatures within these sections. While it may appear technical on the surface, it is never our intention to write music that is technical for the sake of it, but only as a vehicle to reflect the emotion of the track.

In a nutshell, the time signature changes help to navigate the movement of the downbeat, which I will break down below.

This section moves between 13/8 and 9/8, with Jamie introducing a 6 time polyrhythm briefly over a 9/8 section. There are a couple of areas of 4/4.

EB:  You have said that ‘The Kite and The Crow reflects on the nature of conflict and debate in today’s society, which has become increasingly polarized and judgmental. During lockdown we noticed a red kite which kept invading a crow’s nesting territory. The invasion by the kite and the subsequent aerial conflict seemed suggestive of the wider reactionary atmosphere and the opposing ideologies that have been exacerbated by the lockdown and social media.’ Can you elaborate upon that in terms of musicality, politics or anything else?

EF: I will first explain the literal imagery of the track. Essentially each section represents a different stage of the “battle” between the red kite and the crow. The initial face-off, the aerial scrap and the final resolve as they glide away. The metaphor is based around conflict in society today, reflecting on our current approach to debate, our tolerance of different ideas, our over-politicization, and the way we become increasingly reactionary and polarised. The kite and the crow are completely different birds but at the end of the day they are both birds and have to navigate the same space, much the same way we do as people with all of our differences.  It’s interesting as I write this, I’m actually apprehensive to voice my opinions, through fear of any bad judgement of character, but I think that’s precisely the issue. Somehow, we feel that the human race has lost its way when it comes to rational debate, hearing differing opinions, and being open to receive each other, especially when social media encourages us to just label and avoid altogether.

EB: You’re launching the whole album “Luma’ at Ronnie Scott’s on April 21st. Tell us a little bit more about what we are to expect. 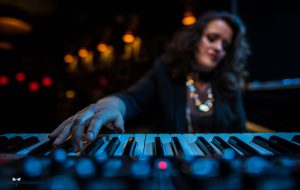 EF: For returning fans, we are excited to showcase our new sound, there are certainly a lot more keyboard textures and pedal effects added to the mix! For new listeners, we hope they will hear something fresh and exciting. We aim to take the audience on a musical journey and hope that you not only connect emotionally with the tunes but feel the same joy that we do when we’re riding the wave together!

Tickets for the album launch at Ronnie Scott’s here