Welcome to the Vinyl Corner, a new column by Jazz Vinyl aficionado Jan Fritz. In each edition of the magazine, Jan will present interesting interviews, news and opinion and the latest trends relating to in the booming market for vinyl records. In this first edition, Jan travelled to the Dutch city of Groningen to interview Sem van Gelder, owner and founder of the Dutch temple of jazz vinyl, Swing Master.

Many say that the root of jazz is the groove. This is a common thread that runs through the entire history of this form of music. Jazz lovers, both past and present, all understand this little grain of truth and the importance of the groove. And when speaking of groove, I’m not just speaking of the rhythmic aspect, this music also sounds best when reproduced in the groove. I’m speaking of grooves in which the signal spirals inward from the edge of a disc with the vibrations being translated by a stylus and then reproduced as sound. It’s interesting to see, that in the same way jazz has become timeless, the same can also be said about Vinyl.

The digital CD, introduced in 1982, replaced the good old LP however today, almost forty years on, CDs are experiencing an unprecedented loss of value. Music lovers appreciate the sound of the LP and most agree it reproduces the music far better than all the bits and bytes of the digital world. The real “aficionados” and some music retailers, knew this at the time and you can recognize them today by the fact that they never abandoned their own vinyl collection.

Miraculously, over the last few years the vinyl record has once again re-emerged as the “first call “ physical carrier. In effect replacing the CD as far as desirability goes. Maybe the music Gods just couldn’t take it any longer and decreed that those pieces of silver should no longer be sold. After all, the less demanding listeners have already migrated to the streaming platforms where they can stream their bits and bytes at will. 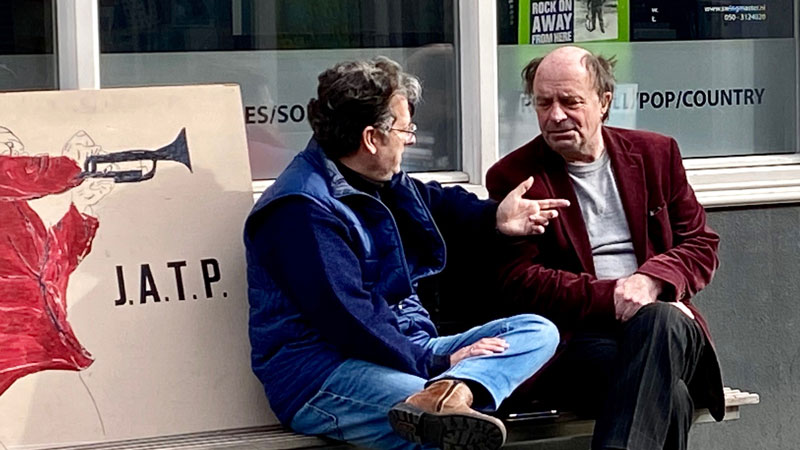 Almost every country in the world has its own record pope or guardian of the vinyl grail. One of these tireless, intrepid fighters for analogue sound is the Netherlands-based jazz connoisseur Sem van Gelder. In addition to his record shop “Swingmaster” in Groningen, also runs a blues label of the same name. Van Gelder, a name synonymous in jazz, however Sem is not directly related to the famous recording engineer. What we do know is that, as far as can be traced, there was a branch of the Van Gelder family tree that emigrated to America some 200 years ago, that much is certain.

Prior to opening his first store in 1978, Sem was active in the industry as a promoter bringing legends such as Eddie “Lockjaw” Davis and Abbey Lincoln to the Netherlands. Interestingly enough, it was during one of Abbey Lincoln’s concerts that Sem met his wife Jacqueline. Sem relayed that, in addition to taking home an Abbey Lincoln LP, she also took him home with her. Sem and Jacqueline have two sons, both professional jazz musicians. Pianist, Gideon van Gelder and saxophonist, Ben van Gelder, who recently returned to the Netherlands after a number of years of studying in the capital of jazz, New York.

Toward the end of February, I had the pleasure of travelling to Groningen to interview Sem at his current shop. This wasn’t the first time my passion for vinyl led me to his “Swingmaster” establishment. The trip to Groningen has become an annually recurring ritual. At the beginning of each year, the “Jazzmonauten”, a group of German freethinkers and record collectors, myself included, make the pilgrimage to this temple of the jazz vinyl.

Some of the “Jazzmonauten” have known Sem van Gelder going back to the time that the shop was located across from the then Groninger Theatre, “The Stadsschouwburg”. Today Swingmaster thrives in the Pelsterstraat not far from the “Grote Markt” and the “Stadshuis”, (the town hall) of the city of Groningen. Outside of the shop is a wooden bench and perched on this is a large painted sign proudly displaying a section of the famous 1950’s “Jazz at the Philharmonic” poster. Also adorning the exterior facade of the shop, sprayed in graffiti, is a large saxophone adding to the allure.

Upon entering the store, Sem greets his customers personally and offers a coffee and sometimes a glass of red wine. The store exudes the atmosphere that jazz fans dream of, nestled between the thousands of rare records (and CDs) are antiquarian books on music, mostly jazz and photo books, all offered for sale at a reasonable price. People often congregate around the kitchen table in the private back room relaying stories, exchanging information and reminiscing about concerts and encounters with jazz legends throughout the years. 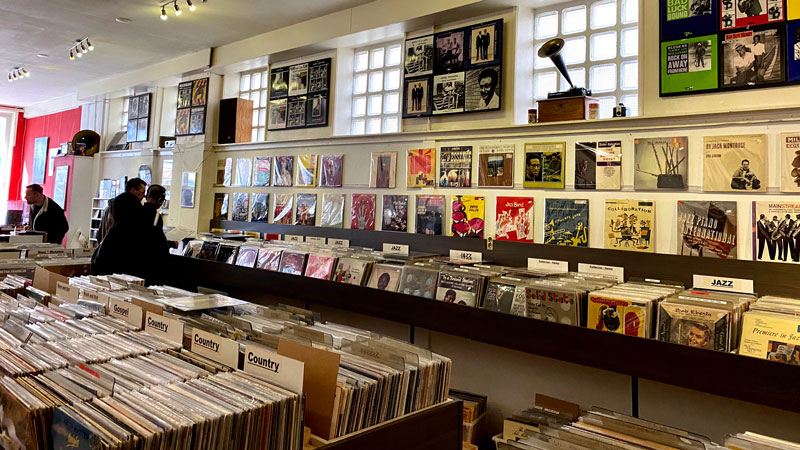 On this last day of February, just prior to our currently mandated “Social Distancing” rules, Sem welcomed me as usual in his normal warm manner and suggested we do the interview outside in front of the shop on the now famous bench seat. It is a spring-like, sunny Saturday and the shop is packed with rummaging customers. We take our places on the wooden bench and Sem begins telling me passionately about his own private collection that includes close to 200 original pressings, many with covers designed by the iconic designer David Stone Martin and almost every record by Herman “Sunny” Poole Blount aka Sun Ra. Sem believes, in total, he has around 700 of the master’s discs in stock. According to his own estimation, his total private collection is around 7,000 LPs.

In the mid 1980’s Sem was a regular at the North Sea Jazz Festival manning a small but, well stocked stand packed with selected LPs and some 78s for festival goers to snap up between concerts. Sem recalls, one year a tall lanky man came by the stand, eyeing the set of original first pressings with covers designed by David Stone Martin. The man asks in a broad American accent, “where did you get these records from? “They came from your country, the United States,” replied Sem. “Yes, I know”, replied the man, “but that’s not what I wanted to know, how did you get these” he asked. As it turned out, the man in question was none other than Norman Granz himself. After an extended conversation the jazz impresario and producer of the “Jazz at the Philharmonic” series, Granz finally walked away, purchasing all of Sem’s 78s.

It naturally came to my mind to ask Sem what records would accompany him on a trip to a lonely desert island. He spontaneously named 12 records, all mono first pressings, which he calls his favourites. Sem explained, that the order these discs are listed in varies each week. See the sidebar for the list of Sem van Gelder’s dirty dozen.

“Yeah, all of these are really true milestones of jazz. Of course, John Coltrane and Miles Davis need to also be part of it, in fact everything that those two created and released needs to be on the list. I couldn’t even imagine trying to choose specific albums” relayed Sem.

So, what happens to the thousands of discs in the collection when you’re gone? I asked. “I don’t want to give it to an archive or museum, for me that’s out of the question. It should be a music lover who takes over the Van Gelder collection”. By “take over” Sem means buy it and that won’t be for a few measly dollars. Believe me, this is one highly valuable collection.

No article on Sem van Gelder would be complete without mentioning that together with the jazz journalist Eddy Determeyer, Sem has travelled throughout the Netherlands under the name DJ Sem. The two can be seen each year at the “Zomer-Fiets Tour” that takes place at the end of August and presents a series jazz concerts in unique venues in the province of Groningen. Festival goers travel by bike (Fiets in Dutch – Ed) from location to location enjoying the music. You can’t get more Dutch than that!

Sem and Eddy have known each other for more than 50 years. As DJ Sem you can experience the two friends as they spin records while the audience spends the evening dancing their cares away. You’ll even hear 78rpm shellacs among the collection, bringing the swing music of Chick Webb and other orchestras from the 1930s and 1940s back to life.

Sem van Gelder’s “Swingmaster” is not just an institution in the Netherlands! Jazz vinyl lovers around the globe visit his shop. I’m already looking forward to my next visit. 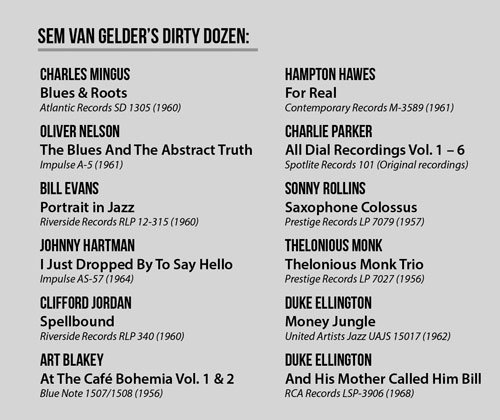 Also included in this edition are interviews with Cyrille Aimee, Ray Gelato, Dave Holland, Jason Miles and Sem van Gelder. We take a look at Bitches Brew, 50 years on. Tony Ozuna presents us with a look at the Czech jazz scene from it’s origins behind the Iron Curtain to the present day. This editions photo feature spotlights British photographer William Ellis.