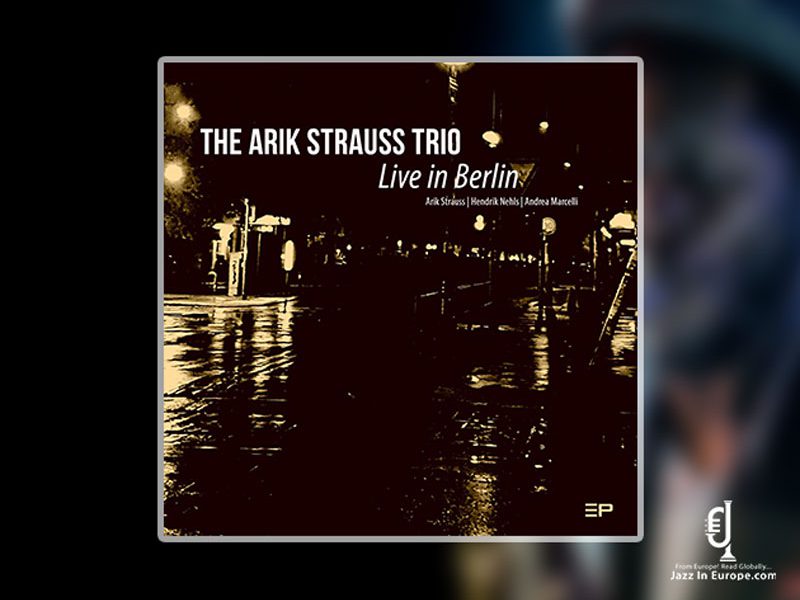 In December 2019, Pianist Arik Strauss took his trio featuring drummer Andrea Marcelli and bassist Hendrik Nehls into the performance space at the Greve Studio in Berlin to record a live EP. The result of this session is presented on this EP titled appropriately “Live In Berlin”.

Following the release of his last studio album “Closing The Circle” the Arik Strauss Trio has been performing regularly. When asked about this live recording Arik stated “Since the release of the last studio album we’ve been playing the material a great deal and I’ve found the compositions have been evolving, often taking a different direction. I think one of the main factors in this was the addition of Hendrik on bass, who’s style is far more conversational. The live environment is very different to the studio and we felt that it was important to document this to document this.”

This EP, presents a number of the tracks also presented on the Closing the Circle plus a new solo track written by Arik as a tribute to his Mother who passed away late in 2019.

Arik Strauss is a pianist, composer/arranger and educator. Arik was initially trained as a classical pianist however in his twenties, being influenced by great jazz musicians, decided to go to New York to learn and master the art and lauguage of Jazz. In New York he studied with Jack Reilly and later with Richie Beirach and performed with top musicians such as Ron McClure, Akira Tana and Shonzo Ono to name only a few. In this period Arik performed in many leading jazz clubs in New York as well as touring Japan including among others Birdland, Yardbird Suite and Blue Moon Philadelphia. During his stay in New York Strauss worked with Mercer Ellington as the arranger of a tribute to his father Duke Ellington.

In 1998 Arik returned to his native Israel where he was tasked with creating the jazz department and teaching at the School of the Arts in Jerusalem and later also in the Givaataim music school. It was in this period that Arik commenced his career as a leader recording a number of albums in various settings. Now some 22 years down the road Arik, has performed throughout world and produced 9 albums as band leader.

Arik currently resides in the the German capital Berlin where he leads his current trio and performs regularly.