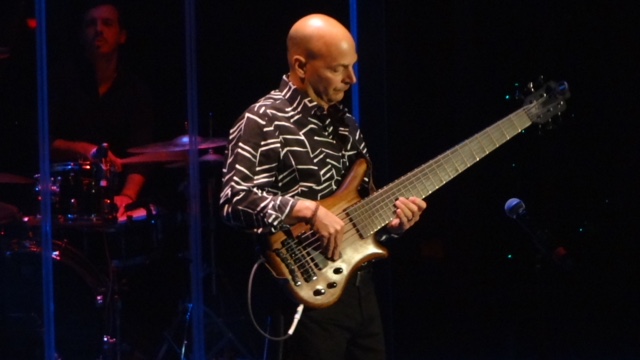 Craig Schoedler is one of those musicians that seems to be unafraid to tackle any musical challenge. This is not only evidenced by his eclectic recorded output but also his latest show “Bass Destinations” that’s expected to hit the stages later in 2019.

Originally from Wilmington (Delaware), Craig studied performance and composition at Temple University in Philadelphia before moving to New York to complete a masters degree at New York University. Craig has spent a great deal of his career working as a side-man across many genres becoming one of the busiest players on the East Coast. While working as a side-man certainly keeps the wolves from the door Craig wished to focus on his own projects.

Craig’s début as a leader came in 2001 with the release of “By the water” featuring among others Mike Stern and Steve Jordan. This album received rave reviews and garnered a great deal of airplay both in the USA and Europe. Since the release of “By the Water” Craig has released a number of solo bass albums including, ‘Bach To Bass” and “Giorni a Venezia” as well as the folk-tinged album “There’s Something About A Mountain…” that features him on bass and guitar. As mentioned above his discography is eclectic, to say the least however the common thread throughout is his virtuosity.

With his last solo release in 2012, I was interested to know if Craig was planning a new release. “Well to be honest since the release of Giorni a Venezia I’ve been very busy touring and just not had the time to focus on a new release. About a year ago I had the idea to produce a new live show that features the bass up front. I wanted it to be a project that would reach a wide audience and fit in the format of venues and festivals who’s music choice reaches across many genre’s. I suspect that at some point the show will form the basis of a new album but at this point, I’m focused on getting the show in front of as many people as possible.”

At the time of writing, Craig had locked in a number of performances and is expecting to bring the Bass Destinations to Europe either later in 2019 or 2020.

Bass Destinations is available for booking for this Summer or Autumn. For details and availability contact Craig via please email Craig directly here.