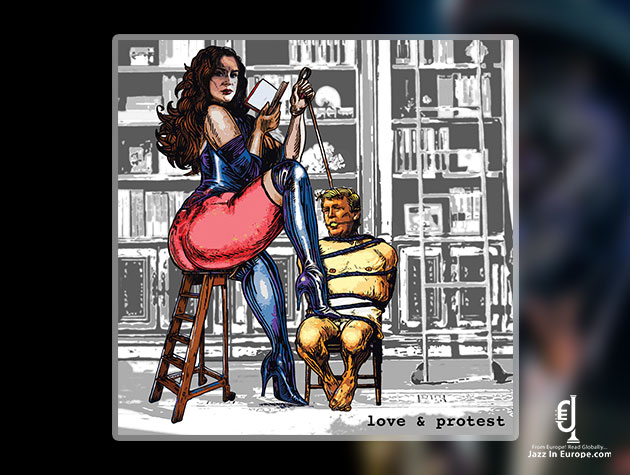 The above and more is written within the sleeve of Collective X’s debut album “Love and Protest”.   Words that ring so true: words of social unrest, political upheaval and personal growth.

Vocalist and composer Alya Al-Sultani’s latest collaboration is something she did with care and a strong will to approach this musical journey with “eyes and mind wide open”. The eyes of a young woman of Iraqi origin raised in Tottenham, North London.

With eight tracks of individual value both for musicality and composition, “Love and Protest” is a work that ensues mainly from the turmoil of the 2016 European Union Referendum and all its collateral damage…

Al-Sultani and her band delve, with jazz, funk, blues and more, into an incredible world where musical images tell us about fetishisation of the black body, honour killings and sisterhood.   Each track is composed and performed as to stand on its own:  there is no tag here, no box to pigeon-hole Al-Sultani and Co in.   And this is exactly why I love this album and its amazing musicians. With a collaboration like on this album, there is not much space for anything else but bravura!  I particularly love Menzel’s sax playing and Idehen’s voice.  Produced by the acclaimed vibraphonist Orphy Robinson, the album contains gems like “Don’t let me go” and “Fetish”, two of my favourite tracks.

Collective X is an ensemble on an international level and so, as a consequence, it makes “Love and Protest” even more cohesive as a work of music gathering musicians from all over London AND Europe.  Without being too political about it, this is an album that can make us think more on our future and our way of life.  When politics rule the world and nothing else seem to count, let’s try and remember what Collective X say: “we make art – we make music – we write – we celebrate”.