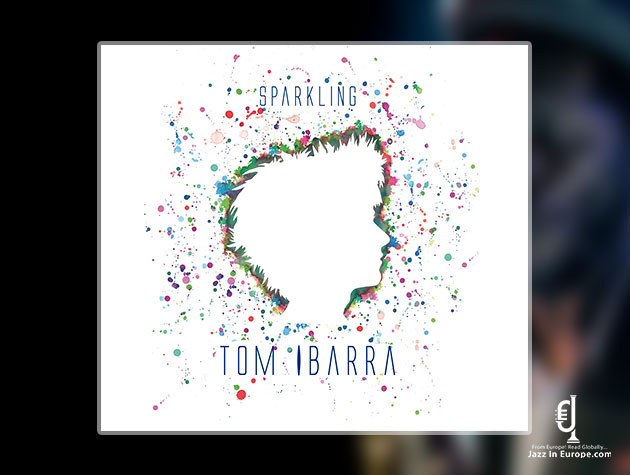 Tom Ibarra continues to enrich his musicality with the youthful passion and drive of an 18 year old. Already well-known, having won copious music competitions, including winning the inaugural “LetterOne ‘RISING STARS’ Jazz Award”. 2018 promises to be a busy year for Tom. His talent has already been recognised, guest playing on stage with A list Jazz artists – Marcus Miller, Didier Lockwood, Richard Bona and Sylvain Luc. I’ve known Tom and been a big fan since he was 15 yrs old. Recently, Tom came round to visit at my home. Knowing how busy he’s becoming I admit to offering an added incentive – coffee & macaroons (tip: He really like these). It thankful did the trick. Always gracious, Tom and I spent time in my office where I had the opportunity to find out more about his new (2nd) album Sparkling and his plans for 2018.

This week – Tom has two major CD release concerts. Firstly, at the well-known Le Zebre de Belleville in Paris, and at The Rocher de Palmer in Bordeaux on Friday evening March 16th, 2018.

(NJ) Tom , firstly great to see you again, lets dive straight in – Tell us about the new album name Sparkling – what inspired it?

(TI)  I was searching for an album name and nothing felt right. Then I realised in playing with the five musicians on this album from the very start it all felt very natural with ideas exploding like stars in my mind – it felt a very magical time while collaborating. The album cover is the visual representation of how I experienced the creative process in my mind.  So I gave it the name – ‘Sparkling’.

(NJ) This is your second album, and it’s been two years since the release of your first alum ‘15’. How different is this new album from the first – such as subject(s) and compositions.

(TI) I’m the lead guitar and composer on this album and do feel that my maturity as an artist is reflected in this album to date.  I did compose tracks over the last two years and many times I felt unhappy with what I had produced.  I really wanted to start incorporating more instruments and allow a flow that I felt on reflection wasn’t there before. Now there’s saxophone, you’ll even occasionally hear me on keyboard,  and the base line is very different – punchier, a modern intellectual 21st century jazz fusion/pop/funk melody mix that hopefully gets in your head. All the band members are really great guys and we enjoy being together exploring music and having fun.  This album has nine tracks, I hope people like it and of course buy it, perhaps for their collection.

(NJ) Recently you had the opportunity to play with Marcus Miller on stage to Miles Davis –  ‘Tutu’ – at the Saint-Emilion Jazz Festival. How did that feel, as you’re suddenly with an icon of Jazz?

(TI) It was very exciting and I felt nervous at first.  Suddenly I’m on stage with a jazz legend for the entire world to see me. Marcus made me feel relaxed and then I just let go and got into it.  This has led onto me being invited by Marcus to be his opening act at the Stuttgart Jazz Festival, Germany in July.

(NJ) I know many seasoned guitarists from Jazz arch top through to heavy metal players and the common feedback is the maturity and quality of your tonal playing. With a real fluidity and lightness of touch.  Have you changed your set up recently?

(TI) I still use the same Hannibal strings, super slinky 9-42’ gauge. I’m comfortable with them and they last.  (Tom recommended them to me in the past, and picks up my Black Aria Pro II TA-50 – Just checking, he says with a smile.)

(NJ)  Jazz is not just a style it’s a language; how important in your musical development would you say Jazz tradition is. Like paying your dues, listening to chord changes, certain riffs played etc.

(TI) I love listening to Charlie Park, Mingus, Monk and Davis. Pat Metheny, Joe Pass, GB and Wes Montgomery. I also like other music genres. Classical, Jazz, Rock, Electronic. I’ll sometimes play along on my own, and as part of my daily guitar practice.

(TI)   After the CD release concerts I am scheduled to play in a number of festivals – Cheltenham, Nice, Stuttgart, San Sebastian, Norway and the Leopolis Jazz festival in Lvov. I also will hopefully spend some time with family and friends. Plus working on another album.

Tom has a great sense of humour, and to illustrate this – with a rather cheeky smile, as if he was doing me a favour and saving my waistline, he ate the last two macaroons…

Find out more about this artist and to buy SPARKLING at his website: Tom Ibarra