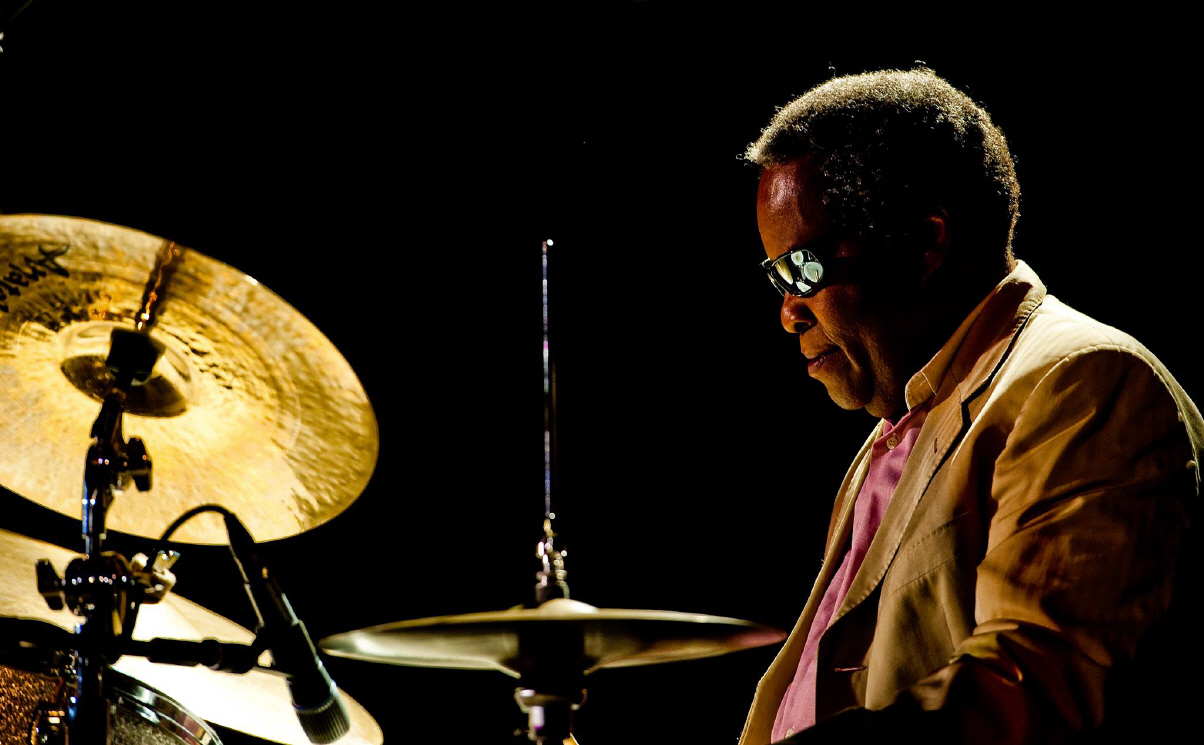 Since 1989, however, he has been mainly based in Linz, Austria, at Bruckner University, teaching drums, composition, and ensemble. In 2008, he retired, but he still lives between Linz and Detroit, collaborating with musicians on both continents.

Hammond, who is primarily a vocalist and drummer, percussionist, is best known as an early member of Tribe, founded in 1971 by jazz musicians as a band, a recording label and a magazine, all called collectively “Tribe.” The founders were saxophonist Wendell Harrison, and trombonist Phil Ranelin, but then soon joined by Marcus Belgrave, Harold McKinney and Doug Hammond. In its music and publication, the collective had a political consciousness with an African-American and African pride aesthetic that was at the time revolutionary -anti-war, community-oriented, and staunchly independent.

The Tribe collective became wider known in Europe only in more recent times due to the efforts of the Detroit-based techno DJ-producer Carl Craig, who organized a revival of the Tribe musicians, and has released singles and then the album “Rebirth” (2009) on the label Community Projects/Planet E.

Hammond, born in 1942 in Tampa, Florida, had begun playing in the early 60s with R&B and blues players, like Sam & Dave, Earl Hooker, and Little Willie John. When he first moved to Detroit in 1965, he played with James “Blood” Ulmer, and Smokey Robinson and the Miracles (for Motown Records). This soon led to sessions with icons like Chet Baker, Betty Carter, and Sonny Rollins. By 1967, he was a founder of the Detroit Creative Musicians Association, which presaged some of the ideals of Tribe.

In 1970, he moved to NYC where he lived for most of that decade, playing with Kenny Durham, Charles Mingus, Nina Simone, Mal Waldron, and again with James “Blood” Ulmer among others.

He says that Mingus’s recording of his slow almost hypnotic trance song “Moves” for Mingus’s 1973 album “Moves” was the key for getting recognition as a jazz artist in Europe, which made it easier for him to stay longer. Everyone knew that song, and so many doors were opened, because of Mingus.

Lesser known releases by Hammond, like “Reflections in the Sea of Nurnen” with David Durrah and others from Detroit on Tribe Records in 1974 are getting more appreciation in now. This album mixed jazz with African groove, soul melodies and a political punch. His song “Wake Up Brothers,” with its sharp comments calling for Black empowerment in its unusually slow and funky approach is celestial.

In 1980, he recorded “Folks” with bassist Cecil McBee and others including vocalists Angela Bofill, and Bessie Carter, and in 1982, in New York City, he recorded his own compositions on Doug Hammond “Spaces” with alto saxophonists Steve Coleman, and Byard Lancaster, with cellist Muneer Abdul Fataah. Then that same trio recorded “Perspicuity” in Traisa, Germany, as the Original Doug Hammond Trio, and these are all now rare and considered classic spiritual jazz sessions for the era.

In 1984 Hammond first moved to Germany until 1988 then he returned to Detroit. He returned to Europe again in 1989 to teach jazz percussion at the Anton Brucker University, in Linz, but he retired in 2008, and these days he is concentrating solely on his own compositions in jazz and classical music.

Hammond has compelling more recent recordings too: “Singing Smiles” (2005) with a trio featuring Dwight Adams(horns) and Pablo Nahar (bass) has an intoxicating slow and easy sway that is hard to place in any jazz style—past or present. Doug Hammond “New Beginning—Solo, Duo & Trio” (2010) is likewise as special as any Tribe recording. In other words,Hammondhas not retreated in the least.

His 2007 release, “A Real Deal” is an experimental duet with pianist Kirk Lightsey with Hammond on vocals, drums and kalimba (African thumb-piano), playing older and some newer compositions including “We People,” “Moves,” “We Together/Struttin In,” and “Dope of Power Suite (Four Tet club mix)”.

Hammond is constantly hooking up with new and younger musicians. His main European groups for limited touring is a hard bop trio with Bologna-based players Nikola Matosic on bass and Mirko Cisilino on trumpet, and his quartet with Swiss-French players Maria Grand on tenor saxophone, Stephane Payen on alto saxophone, and a fellow American based in Vienna, Jon Sass on tuba.

Most recently since he has started spending more time in the Czech Republic, he has a new project with a younger Czech avant-garde bassist Jiří Slavík playing with rhythmic space and melody as a duo.