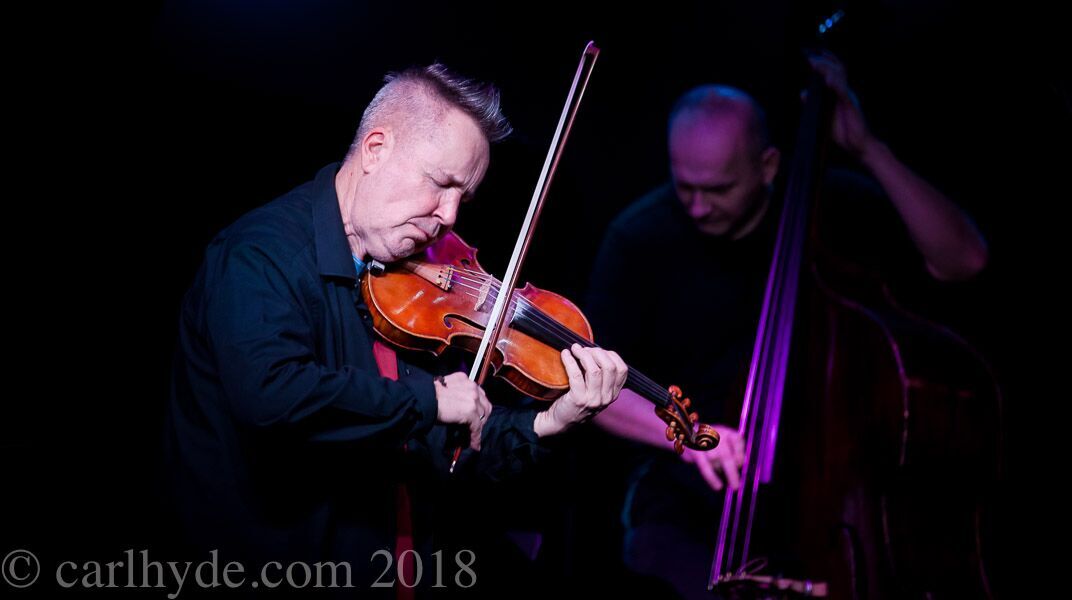 Violin virtuoso and composer Nigel Kennedy played George Gershwin and more at Ronnie Scott’s in London last week amid a standing ovations furore and utter delight from the audience.

Out of 5 dates comprising of 8 gigs in total, Kennedy has shown a light that never shone like this before: his stupendous talent combined with a sheer undiluted passion.

Kennedy, who reminded the audience attending his first gig on Monday 12th, he had played with the great jazz violinist Stéphane Grappelli on that same Ronnies stage when he was just 14-year old, was in a smiling, fist-bumping kind of mood.  But I dare say it wasn’t just a mood, his verve and magical playing didn’t let the audiences down during all his performances.

One perfect quote came to mind whilst I was sitting at the bar on Monday night (the first of 5 dates) in my favourite corner, taking notes and watching the show, I thought: “he plays with blood!!”.

The great Mexican actor, Gael García Bernal, who plays the part of an orchestra director in the Amazon series “Mozart in the jungle”, mentions this apt phrase every time he sees a musician or someone in his orchestra playing with true passion and real feelings.

Throughout their performance, Kennedy and his 4 musicians, Rolf Bussalb on acoustic guitar, Howard Alden on jazz guitar (of the Benedetto brand, the same as used by Pat Martino incidentally), Beata Urbanek on cello, Tomasz Kupiec on double bass, were all piercing through the stratosphere over and over with superb notes and improvised tones.

Nothing was going to impress me more than watching Kennedy play like a possessed genius, with his smiling eyes, switching between his two violins and then, during the second set, playing at the piano, too!

There were pieces like “Porgy & Bess”, “The Man I Love” with a touching double-bass solo,  the aria “Summertime” (part of Porgy & Bess) which was languid and decadent.   The audience was transfixed.  Kennedy was enjoying himself, the smiles and the jokes kept coming and he remembered to constantly thank the people that had come to watch him… “Thank you for coming out to support live music on a Monday night!”.  To him, a firm supporter of live music, this meant a lot and his playing went over the boundary of just being excellent.   There is something more to him than just talent.   The 1st set finished well over the allotted slot, bound to happen really, the crowd standing and applauding, didn’t want to let him go.

“Rhapsody in Blue” opened the 2nd set, a “2.5 minutes version” says Kennedy, everybody laughing and intrigued, thinking how can that be, but he could and he did.  With passion, his eyes closed, the sheer concentration on the power of the notes was visible on Kennedy’s face.

Then a powerful and long piece composed by him and inspired by the famous book by Isaac Singer, “The Magician of Lublin”, was mesmerizing for its vitality and as a moving musical testament to the Jewish community devastated throughout history.  I could have cried when that finished!

Time flew again, and that is saying something.  A prodigious show, one that I won’t forget for a while, as a writer, as a classical music devotee and as a human being witnessing what another human being can achieve when passion and heart rule!

Kennedy bowed, thanked the public, big smile on, while asking his fellow musicians to bow to the audience with him and before they left the stage, called their name one by one, calling Tomasz Kupiec “the architectural foundation” (of double bass)!  How beautiful is that?

Then, as modestly and almost as shy as ever, he said: “My name is Nigel and I am doing very well” and they all left the stage.