Wendy Kirkland: Her Time to Shine

Wendy Kirkland, pianist and singer extraordinaire, has been stunning audiences across the UK for many years and is considered ‘one of the great unsung heroines of British Jazz’ The Jazz Mann.  With two sell out performances at Ronnie’s Scotts, now seems to be the perfect time to start singing about her.

I have been fortunate enough to see Wendy perform twice recently, and one of the many things that especially stood out to me is her incredible versatility. Her Latin Lowdown set, inspired by her hugely successful Latin Lockdown series originating online, is exciting, energetic and impossible to sit still to and very much needed after the past year or so. Wendy skillfully takes the audience with her on her journey of fantastic Latin inspired material. Her band were incredible and special guest Roger Beaujolais gave a virtuosic performance that brought the house down during her recent gig at Toulouse Lautrec in London. A few weeks later, I went to see Wendy at Ronnie’s Scott’s for her performance as part of the ‘Voodoo Lounge’ series. Performing with her husband, the brilliant guitarist Pat Sprakes, Wendy was quite simply outstanding. Fantastic arrangements of some blues inspired standards with incredible playing from both Wendy and Pat. Wendy’s skills as a pianist must not be underestimated. The speed, groove and dynamics of her solos are at times, mind blowing. I had no idea she could play like that.

Her debut at Ronnie Scott’s in June sold out and she was quickly asked to return and again, sold out. Playing at Ronnie Scott’s is a significant milestone for many musicians, and it is truly wonderful to see Wendy achieve this accolade after many years of hard work, energy, backed up with formidable talent and skill. It was an absolute pleasure to speak to Wendy about her Ronnie Scott’s experience.

It is the dream of many musicians to play at Ronnie Scotts. Why do you think that is?

Ever since I started out, I recall audience members coming up to me after gigs and saying “so, when are you playing Ronnie Scott’s then?”. I think some of those people were joking, some were serious, but it made me think…yes, when AM I going to play there? It’s the pinnacle of all jazz clubs in the UK and beyond, full stop. So, I think once you have played there, you feel like you’re going in the right direction career wise. Ronnie’s is just synonymous with the best of UK jazz and no matter what other great jazz clubs exist, most people have heard of Ronnie Scott’s, it is a household name in a way that no other club is.

Are there artists that you are inspired by that you have seen at Ronnie’s?

There are so many, musicians that have inspired me – not all jazz players either. I must confess the only live concerts I’ve seen at Ronnie’s are recorded ones – we wanted to see Eliane Elias play there recently but we were already playing ourselves, and that’s the problem if you’re a musician, isn’t it? Not enough time to get out there and enjoy other concerts when you’re playing yourself. So, concerts I’ve seen would include Jason Rebello, who I’ve always loved the playing of, and Roy Ayers…. via YouTube mainly, at Ronnie Scott’s. There’s a great snippet of a Tubby Hayes concert from around 1970 there – I so wish the rest of it was there but it seems only two songs survived.

Did you approach your Ronnie’s gig any different to other gigs? More practice/set choices etc.? Did you feel under pressure and did you do anything differently to handle that?

I did a lot more preparation than I usually do! Yes, to more practice and it was quite a long gig, three sets as opposed to two. On top of this it was a duo gig so, nowhere to hide, and the first actual live concert that Pat and I had done since lockdown no. 2 – so, no pressure there then!!!! It was odd though, after weeks of being on tenterhooks when we arrived there to set up, I felt strangely calm – I can’t explain it. It was as if I had come home somehow.

Since the UK opened up, you have been straight back on the circuit and in fact, having kept going during lockdown with your fantastic Latin Lockdown set. How does it feel to be back in front of a live audience?

It feels wonderful! There’s nothing like it, as I’m sure you well know. We felt during lockdown that we shouldn’t just do nothing…that it was right for us to carry on doing something so Latin Lockdown was just that. It started as a bit of a test for me to practice and then perform a piece, on only one day’s practice. Then Pat joined me after a few days, and we ended up doing 86! We never made it to 100 as we had a paid live stream offer and we felt ticket sales might suffer as a result, so we stopped broadcasting for free. I think the views are up to a million or more now – it’s amazing really, how many people sent messages saying it was the highlight of their day, that it was keeping them going etc. but I couldn’t help but feel if those people had only donated £1 for the occasional concert, we’d have made some income from the experiment, when we badly needed to do that. It’s sad that through all the encouragement from that Facebook audience, only a handful of devoted followers donated, more than once on many an occasion and another reason we stopped the series was because I felt bad asking for donations, a request ignored by the vast majority of viewers, while the same people kept paying us. I’m afraid the streaming situation at the moment makes many people believe they should get all their music and entertainment for free.

What would you say to musicians that feel that they will never get to play at Ronnie’s?

I would say never give up hope. My favourite inspirational quote is from comedian Steve Martin, I’ll probably mis phrase it horribly but he said something along the lines of “Be so good that you can’t be ignored”. It’s not arrogance, it’s just confidence, but that takes time to build. I certainly never felt that confident years ago and perhaps hid my light under a bushel but now that’s not the case. So, to those musicians who feel they will never get there, believe in yourself but not too much to start with! Hone your craft, which takes time and keep on trying to break through there. 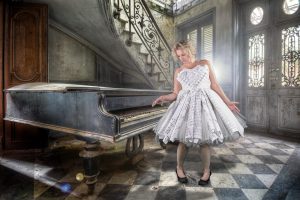 Has the time over lockdown changed the artist you are now coming out of lockdown?

Definitely. I feel a lot less bothered by trivia now. Things that bothered me before lockdown, now I look at and say to myself “seriously? You think this matters?” and normally the answer is ‘no’. Losing my dear Dad in January this year was also a factor – taking care of those I love is right up there at the top of my priority list now. It’s been really hard for all musicians and I’m sure those reading this will resonate, but I do think that non-musicians don’t realise just how difficult it has been, with no work available and a diary which just had the plug pulled. So, I now am very grateful and very determined to make sure I enjoy each and every concert. That’s not the way I felt before – sometimes it was a case of ‘getting through’ a gig – now I feel like if I can’t enjoy it, what’s the point in doing it? Which I think is a positive!

How do you hope people feel after attending one of your gigs?

If it’s the first time they’ve seen me, I hope it makes them feel like Dave Gelly did, like, “why haven’t I heard of her before?!”. It certainly has taken me time to get to the stage where my album was released and then reviewed by anyone noteworthy in the UK jazz press. Better late than never though, eh? For all attendees of a gig of mine, I just hope they feel entertained, rather than just educated. Although I do attempt to give out interesting facts about the pieces we play, or have composed, I just see myself as an entertainer really, I want to make people smile and tap their feet as well as enjoy the music. That’s what my favourite artists do, and that’s what I aim to do.

Well, as an attendee at several of Wendy’s gigs, I can absolutely confirm that the entire audience was smiling and tapping their feet and had a fantastic night.  Wendy continues her Arts Council funded, Latin Lowdown Live UK tour and I would highly recommend getting a ticket. Wendy brings joy, kindness and expertise to her audiences. When she talks about the pieces she plays, she brings her warmth, energy and expertise to the conversation and then brings those same qualities to her performance. She takes you with her, no barriers, just excitement, skill and artistry. No longer unsung, she has firmly fixed her place in our Jazz minds and hearts.