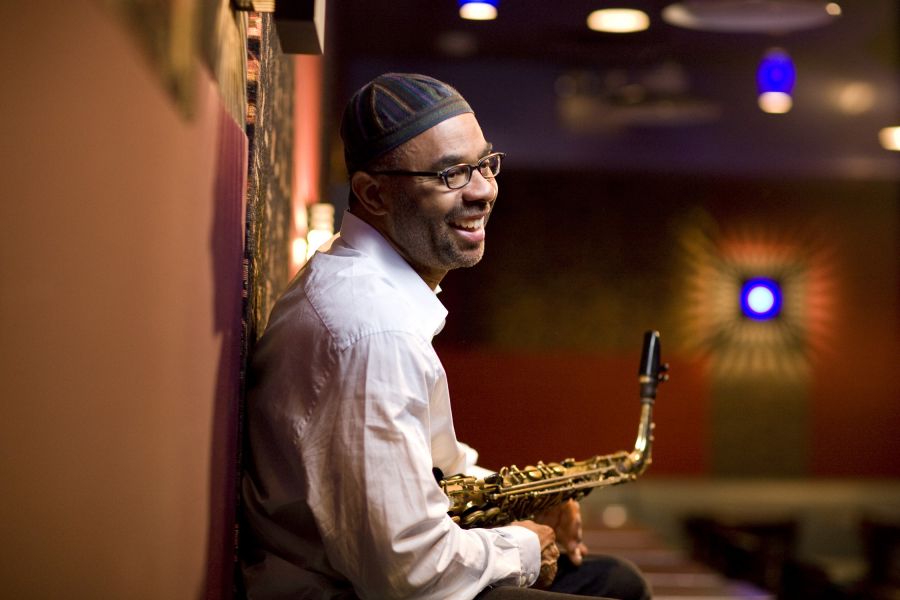 Scott H. Thompson met with Kenny Garrett. Scott asked Kenny a number of questions; read what Kenny had to say.

“Marcus Belgrave still makes it possible for musicians like myself and James Carter, Geri Allen…”

“There’s something about Detroit itself.  For me, Detroit was so many different genres that you get, like bebop, free music, classical music, Motown – and that exposed me to different kinds of music.”

“My father played tenor saxophone.  I loved the smell of his case.  I would sit by the case and look at the saxophone.  It was an old case and had the off-red velevet.  I loved that smell.  I would sit there every day.  He got me a little plastic saxophone for Christmas.  Then he got me an alto with a bullet hole that had been soldered.   I think he bought if from a pawn shop.”

“New York was definitely fertile ground for me.  I had been working with the Ellington Band under Mercer Ellington.  Then they had to go work a show on Broadway, Sophistaced Ladies, so I just stayed around New York.  I worked with Thad Jones, Lionel Hampton, all the big bands.  I met Freddie Hubbard earlier in Detroit and eventually I ended up playing with Freddie and Woody Shaw and Art Blakey.  There was a lot of great music happening.

“That was a blessing, man.  I saw a YouTube clip from 1985 where I was playing with Freddie, Woody and Dizzy (Gillespie) and I thought, man!  I didn’t realize the significance of it until later.  You’re standing with the greatest trumpet players around at that time.  Then I went on to play with Miles (Davis), which was on yet another level.”

“My first encounter with Mulgrew was in the Duke Ellington Band.  The alto player had disappeared and I was called last-minute to sub for him.  I met Mulgrew at sound check, when I walked in Mulgrew was playing Giant Steps and I just came in and started playing with them.  That was our first encounter.  We eventually became roommates in Brooklyn for about 3 years.  He was my go-to man…if I had any questions about life, I would call him on the phone and talk for hours about harmony.  I would go to him for questions about philosophy, and he would say he didn’t have the answers, but he always had the answers that I needed.”

“He had a good philosophy about life.  He was into the Self-Realization Fellowship (founded in 1920 by Paramahansa Yogananda).  We both used to go to the meetings.”

“He wanted to be like Hank Jones and Tommy Flannagan, those were his guys.  He went for it and he accomplished his goals.”

“He just loved me unconditionally.  That was a great thing.  My personality is totally different from his, but he just accepted me for who I am – and I admire that.”

“They’re keeping it going over there, which is a great thing, because we need that.  They are self-contained over there and every time I’ve been over there has been great.  And of course, I’ve known Wynton forever.  We came to New York almost at the same time.  He’s doing a great job.”

“What I try to do with my music – I hope that I can uplift people, trying to push myself to the next level.  I hope when they hear the music I hope that they leave after taking a journey – I have very eclectic taste – and I hope that they take that journey with me.  As far as my legacy, I have been blessed; I played with all my heroes and you couldn’t ask for more than that.  I’m basically just trying to keep the music moving forward.”

“When I get to the bandstand, something just happens.  I just play and I go in this little place and the next thing I know – something happened.  I have always tried to play music that touches people.  That’s in the writing and in the approach I play.  I’m just trying to uplift their spirits.  That is important.  Music is healing.  Not only is music healing the audience, but it is healing the musicians too.  Like my heroes like Coltrane and Joe Henderson, Sonny Rollins, Bird…cats like that…I try to keep some of that in my playing.  I try to keep the foundation but at the same time I try to be who I am.  I try to keep it authentic and honest because people can feel that.”

“Music that fills up your soul.  That’s what I’m looking for, something that is going to fill me up.  That spirit that filled me up in the beginning, I’m always looking for that – trying to find that music – that keeps you wanting to play.”