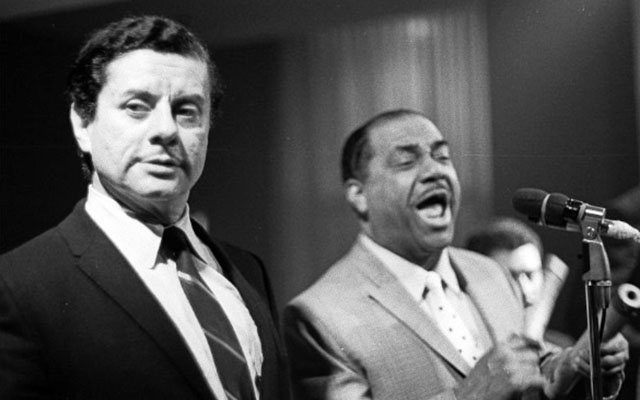 Machito laid the groundwork for Latin jazz, Tito Puente pushed the envelope with passion, and Carlos Henriquez propelled the music into the future. The Music of Puente, Machito & Henriquez. Music Director and bassist Carlos Henriquez and the Jazz at Lincoln Center Orchestra recently explored the phenomenon of Latin jazz, through the paradigm of Afro- Cuban forefather Machito and “Mambo King” Tito Puente. Hailing from the Bronx, Henriquez’ home borough was a fertile landscape for Latin jazz in New York City.

Henriquez has performed with Tito Puente, Celia Cruz, Eddie Palmieri, Rubén Blades, and Bobby Cruz.  At this recent show Henriquez debuted five of his own compositions. “Using the Jazz at Lincoln Center Orchestra, plus extra cats from that explosive era of the ‘50s…surprise guests”. He played tunes like “Mas Bajo” and “Cuban Fantasy.”

Henriquez continues, “Playing with Tito Puente was a dream come true for me at age 17. He was the highlight for many Latino performers at the time and one of my favorites. TP treated all of us with a special love. He taught us how to play this music with style and respect. TP spoke very highly of Machito and told us that he learned much from the man. To me, Macho had the best band and TP had the best style and class in his band, along with a punch of excitement.”

Machito, (Francisco Raúl Gutiérrez Grillo, born Feb. 16, 1908 in Havana, Cuba, died Apr. 15, 1984 in London, England) was a legendary bandleader, singer, maracas player, and composer who basically laid the foundation for Latin jazz. Raised in Cuba, he was the son of a cigar manufacturer and got the nickname Machito as a youngster, singing in many local groups. He relocated to New York City in 1937 and formed a band with his brother in law, Mario Bauza, and was a singer with the Xavier Cugat band. Machito’s music would become a key element in the Afro-Cuban jazz/Cubop movement. He was also welcomed into the jazz genre, having performed with Charlie Parker, Flip Phillips, Buddy Rich, and Harry Edison in the 1940s-‘50s. Machito and his Afro-Cubans made their debut at the Park Plaza Ballroom in December 1940, leading the charge in the mambo craze. They were known for the hit “Tanga.” Machito was one of the first to introduce Afro-Cuban jazz as one of the earliest hybridizations of the two genres and, in doing so, created a lane for a plethora of Latin styles like mambo, son, guaracha, and guajira to further diversify the music.

Machito would go on to perform with with Doc Cheatham, Joe Newman, Cannonball Adderley, Dexter Gordon, and Dizzy Gillespie. During the ‘50s, Machito’s band performed free gigs in Central Park in an attempt to pacify youth gang wars. In the early ‘60s, flute and strings were most prominent in the charanga/pachanga craze, but Machito continued his onslaught with a brass and reeds-led big band and shared time playing together with Chico O’Farrill and Tito Rodríguez. By the time the salsa boom hit, it was pretty much the style he had been playing for quite some time. In the 1970s, he was an active social worker, helping the underprivileged, elderly, and drug addicts. In 1975, he recorded Afro-Cuban Moods (Pablo) with Dizzy Gillespie. In 1982, Machito and his Salsa Big Band won a Grammy® Award. Machito alumnus included such iconic artists as Tito Puente, Eddie Palmieri, and Ray Barretto.

Machito was in residence at Ronnie Scott’s jazz club in London when he suffered a cardiac arrest and died five days later on April 15, 1984. The 1987 film Machito: A Latin Jazz History commemorated the life and musical contributions of the man.

Machito band member Tito Puente grew into a position of leadership in Latin jazz with his explosive timbale expertise and talents as a bandleader and composer. Ernesto Antonio “Tito” Puente was the son of native Puerto Ricans, Ernest and Ercilia Puente, living in New York City’s Spanish Harlem community. Born on April 20, 1923, in New York City, Puente began his professional career at age 13 and later became known as the “King of Latin Jazz.” He was a pioneering force in Latin music, known for morphing styles and adding the big-band sound to traditional Latin music. In 1948, Puente formed a band that would become the Tito Puente Orchestra. By the end of his decades-long career, Puente was deemed a musical legend in Latin music and jazz circles.

After returning in 1945 from a stint in the Navy, Puente attended The Juilliard School on the G.I. Bill. He later gained notoriety with his big band by adding Latin and Afro-Cuban rhythms to his repertoire, including cha-cha, merengue, bossa nova, and salsa, and his continuous experimentation and creativity earned him a reputation as a musical pioneer. He was also respected in the jazz circles, having played with Woody Herman and George Shearing. Puente won five Grammy® Awards and garnered seven additional Grammy® Award nominations. In 1999, he received a Latin Grammy Award (best traditional tropical Latin performance)—his fifth Grammy® Award—for Mambo Birdland.

In 1979, “El Rey” (The King), as Puente was called, created a scholarship fund for Latin percussionists at The Juilliard School. “The scholarship was a dream of mine for a long time,” Puente said, explaining, “In the Latin community, we have a lot of gifted youngsters who don’t get an opportunity to develop their talent because of a lack of money. Long after I’m gone, the fund will be helping kids.” Tito Puente died on May 31, 2000, at the age of 77, in New York City.

The influence of Puente and Machito carries over into the world of Carlos Henriquez, as he explores the beauty and depth of these great musical Latin leaders with the backing support of the dexterous Jazz at Lincoln Center Orchestra. “The great bassist Bobby Rodriguez played with both Machito and Puente and delivered the goods to both bands with class. I will be attempting to bring back a little taste of that explosive era,” bassist Henriquez says with a smile.

Jazz at Lincoln Center’s 28th season showcased the depth, beauty, and diversity of jazz, as they saluted the music’s enduring connection to the theatrical stage and silver screen. The iconic stars who built that legacy were featured along with timeless music from Billy Strayhorn, Miles Davis, John Coltrane, and Ray Charles, anchoring another season of jazz and American song.

Editor’s note: JazzinEurope is very pleased to make the connection with Scott and values his enthusiastic support with his new curated and revised column for us in the menu section “Across the Pond”.

His original article was published in PlayBill Arts