Ezra Weiss & The Rob Scheps Band | Our Path To This Moment 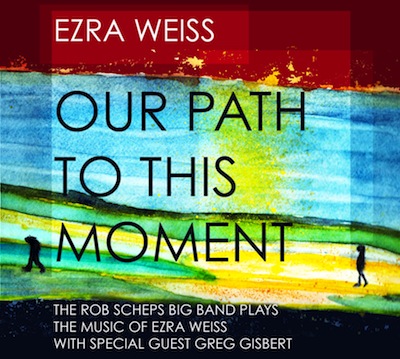 This album sees the Rob Scheps Big Band tackle the works of composer Ezra Weiss, with Weiss himself providing piano on some of the tracks. It creates an old school big band sound around some intricate harmonies with wonderful improvisational solos provided by various members of the band. The production is polished and the album is presented with some colourful and intriguing artwork.

The album opens moodily with the track “Our Path To This Moment”. Guest trumpeter Greg Gisbert provides a stirring solo, sounding clean as a whistle while floating in and out of the band as they pick up some steam towards the track’s conclusion. Band leader Rob Scheps also executes a wonderfully breezy solo on soprano sax. “Rise And Fall” proceeds at a more up tempo pace, again with the shimmering trumpet of Gisbert interplaying this time with the raspy baritone of Robert Crowell. The two bounce off each other superbly.

“It’s You Or No-One” is an old swing ballad written by Julie Styne and Sammy Cahn made famous by Doris Day. Here the song is given more of a Caribbean flavour and moves along very brightly with a great tenor solo from Scheps. Ezra Weiss himself makes an appearance on this track providing an unfussy piano solo that punctuates the song nicely.

The dark rhythms of exotically named “Kunglageta” provide an ambitious trombone solo with Tom Hill doing his best to reach the lowest register that he can find. He succeeds admirably. “The Promise” is a moody, brooding track that evokes the smoky bar atmosphere that Sinatra himself might have dug. The track picks up some heat with a barnstorming alto sax solo from David Valdez. The highlight of “Jessie’s Song” is a bluesy yet airy tenor solo from Scott Hall. The album culminates in “Wayfaring Stranger”. The track is a particular highlight for me, beginning with a stark and solemn trumpet solo from Gisbert. The song moves along briskly with some solid drumming from Ward Griffiths who is afforded the opportunity to show his chops with a delightful solo towards the end of the track. Gisbert effortlessly hits the high notes and a wonderful crescendo from the band finishes the song and the album.