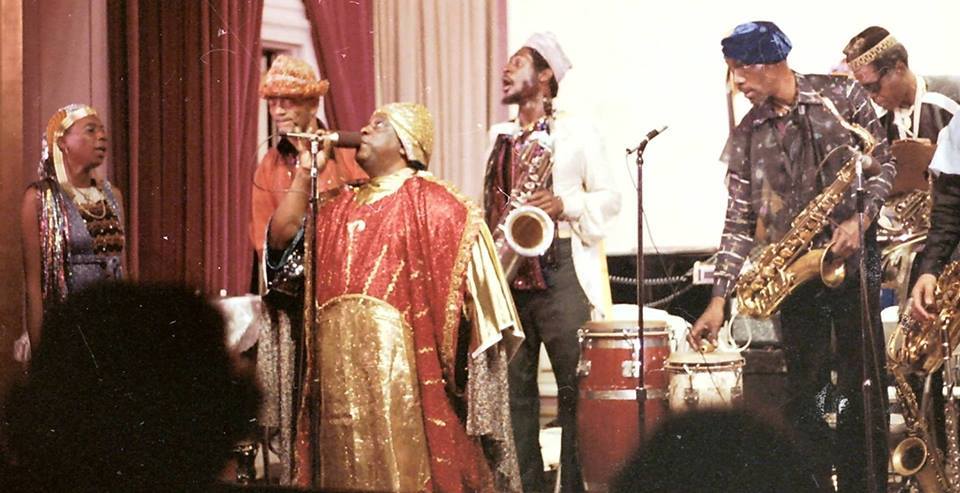 So, what about the more spiritual side – how does jazz make you feel? I asked. Knoel said,

“I feel that jazz is actually the true spiritual music of African-American. I know this because I have seen the transformation and exorcism of negativity which occurs, especially when people are so involved. The fact it is irreligious is testimony in itself that the religion taught to African-Americans is not their true religion and that connection is present inside of the music when it is played in pure form.

The true religion of Nubian people is shrouded in the mysteries of the Pyramids.

The most consistent experience of this magic has been my tenure with the Sun Ra Arkestra. Recruited by Sun Ra after completing my studies with Makanda McIntyre at the State University to Old Westbury, my true call was made apparent.

So how were you recruited into Sun Ra’s Arkestra?

Knoel explains. “In 1979 after I graduated, trombonist Craig Harris (a major force in improvisational music) and Prof Warren Smith (percussionist and founder of M Boom) set up an audition for me, tenor/baritone player Kenny Williams and former Sun Ra trombonist Henry Mitchell with Sun Ra who was recording at the Variety Arts Studio on 42 Street. Sun Ra came to Studio Wis on 21 St  to audition us, playing ‘Cherokee’ on the keyboard but altering the chords every chorus. I was trying to catch the chords but felt so musically overwhelmed. Saxophonist with the Arkestra, John Gilmore would explain to me later, “Sunny is a modal player”.

Sun Ra then introduced me to The Creator. He told me, “This is The Creator’s band. I work for The Creator so if you want money, fame or fortune, this is not the band for you. I work for the Creator. I don’t want your theory, your musical technique, your musical knowledge; I want your spirit. I deal with spirit sound.” Kenny and myself were fascinated to say the least and joined the Ra reed section of Marshall Allen , John Gilmore, Elo Omoe, Jac Jackson and Danny Thompson .

The next day I was featured on the song ‘Seductive Fantasy’ playing baritone sax.

Sunny was playing tracks and just started playing some abstract patterns on the piano. He nodded for me to play. I was thinking, “What key?  Huh?”  I looked at trumpeter Mike Ray and he said, “Play”. So I played! This was my second meeting with Sun Ra. This song is on the ‘On Jupiter’ CD (1979). For some reason I was not credited as the baritonist but it is most certainly yours truly. That was the beginning of my real jazz education.

During this time Sunny had taken up residency at Variety Arts Studio on 42nd St.  For weeks he would occupy the studio ten hours a day, rehearsing and cutting tracks. These would be released as his 70s period of studio recordings. ‘UFO’, ‘On Jupiter’, ‘Sleeping Beauty’, ‘NuclearWar’ etc. Sun Ra selected musicians from different geographical regions of the US and even Brazil, This ‘amagamum’ captured the spirit sound of African-American people from all over the US, many of us from different tribes yet honed into the universal expression that emanates from the blues.

Sun Ra calls us to use our instruments to paint pictures of infinity, indeed it is this plane from which the Arkestra begins.

Sun Ra, who experienced playing for all types of African-American events, was able to harness, project and manipulate the medicinal, psycho-psychological and soul stirring affectations of musical presentation just as the evangelist would use musicians to elevate the congregation to a spiritual frenzy or somber reverence. He called this ‘Tone Science’. Many a rehearsal was a vehicle for him to develop this ability, (collectively and individually) of communication, mind/ thought projection, with sound in his musicians. His conversation was always in praise of The Creator.

In many ways you might call the Arkestra a space revival show not dissimilar to the traveling tent of a gospel evangelist. This was not a religion-this was a Ra-legion dedicated to The Creator.

Through constant rehearsal, Sun Ra developed an almost psychic connection between his musicians and himself. Many a time I would put the next song’s music on my stand before Sunny indicated what it was to be. Sun Ra tailor-made his compositions for his musicians and his rehearsal and performances to the people that were there, for their own vibrations and sensitivities at that moment.

This was merely an extension of the improvisation element in each great performer- be it an actor, singer, preacher, or public speaker. This is a point to which the written notes are set aside for the inspiration of the moment. This inspiration comes from the feedback of the audience or it can come from deep within the consciousness of the presenter. Either way it creates a unique experience for the participants, never to be repeated. This is a very strong traditional approach within the African diaspora (scattered parts of a community) in particular, especially in the churches of the African-American community as well as on the entertainment stage.

Along the way, there were some important stages in the creation of Knoel’s standing. One was in 1982 when Knoel undertook a residency which made him a legend in the Harlem Jazz community and brought him to the attention of Miles Davis by BeBop drummer Khalil, who took Knoel to meet Miles at his house on 77th St one morning, where Miles gave Knoel an impromptu consultation and encouraged him to play straight tone and stop imitating the mannerisms of Charlie Parker.

Sun Ra called Knoel back to the Arkestra in 1988, when Marshall Allen became unavailable for a short time. Upon Marshall’s return, Knoel remained in the Sun Ra reed section as the Arkestra’s 3rd alto, a chair that he fills to this present day, while occasionally appearing as tenorist for the Arkestra as well as doubling on his native baritone sax. Sun Ra encouraged Knoel to dance and sing, and Knoel continues to do just that – sometimes surprising the audiences. One reviewer wrote; “During this performance, Knoel Scott surprised me with an acrobatic leap off the stage and he proceeded to do cartwheels and dance in a manner that looked strongly influenced by Capoeira, to the rhythm of the music played by the rest of the Arkestra. This man is in impressive shape for someone of his age, in addition to being an outstanding jazz musician.”

Knoel relocated to Alaska from 2002 to 2006, where he formed the Knoel Scott Trio, performing his original compositions with renowned keyboardist Barney McClure.  He recorded an album ‘ Knoel Scott; Live in Alaska’ (BMP C001801).

He also has his own quartet (The Knoel Scott Quartet) and this made its European debut in January 2015 with Marshall Allen as special guest to a sold out audience at London’s Cafe Oto, preceded by Knoel’s appearance with maestro Allen at the Gilles Peterson Worldwide Award ceremony at the Koko Theatre in London.

After an extensive world tour with the Arkestra in 2014, in celebration of the centennial of Sun Ra, Knoel divides his time between London and Philadelphia and continues to be a mainstay and one of the longest-serving members of the Arkestra.

“So, finally can you explain your own view of jazz? “ I wanted to know.

Knoel said, “Jazz is an exorcism: it cleanses the soul and purifies the mind. It creates oneness of mind, spirit and body. The strange mathematical rhythmic equations are as old as the pyramids yet from as far as the most distant star.

In a similar way of thinking to Sun Ra I am totally allergic to simply presenting a ‘set’ show or concert. The idea is rather sterile and presubscribed. Don’t we all have to deal with enough presubscribed situations in our ordinary life? The job of the performer is to give his/her audience something unique and special that will be of some use to their sensibilities and spirit. So, my sets are always different in if not content then in the order of presentation. There is a cosmic law of vibrational sensitivity which governs the time and circumstance for each composition. This is what I try to achieve. Indeed I am trying to heal myself- and I hope audiences can find a healing of their own in this experience as I play, dance and sing to the glory of the Creator.

Jazz is a rejuvenation of forgotten thoughts and forays, sculpted in sound and a spirit dimension, emitted from the primacy of man’s celestial origins. Jazz is the voice in which the Creator speaks to your innermost being.

It is that voice which I listen for in my ‘Kusicians’. The source of this is found within the pureness of heart and sincerity of the musician. When I feel that sincerity and trueness of spirit from an instrumentalist I have feel an instant affinity with that person. When this oneness is shared by the two of us the, ‘I’ve found a ‘Mate’ as the British say. Occasionally I find someone who plays what I hear in my head as well as what I feel in my spirit. My present quartet is comprised of three wonderful musicians who share my love of the jazz tradition and are open to finding different ways to express themselves in keeping as such.

The Knoel Scott Quartet is a compilation of my various musical experiences tailored to enlighten and entertain jazz aficionados and novices alike. I seek to convey the power and beauty of jazz in a manner that is upbeat and also fits with these times of rap and hip hop. Thusly I incorporate the spoken word during my performance. The common link between jazz, soul, R&B and Afro-Cuban is swing so we give a sample of these various ingredients that make up the continuum of music of the African-American tradition – the past, present and future. The affect is what we call swing- and it don’t mean a thing if it ain’t got that swing.

So the quartet takes a walk down the hallowed streets of Harlem in sound, intensity, song and spirit. Jazz is fighting for its life and I arise from the trenches of the Arkestra to sing a song of praise, worship, love and harmony with the hope that I may put a smile on your face and a little love in your heart.