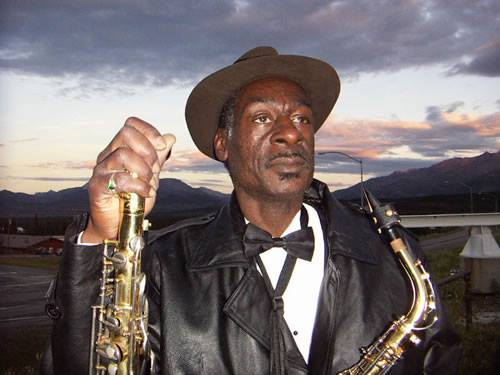 Read Part 1 of this interview here.

How did you get well known, I asked – when was your ‘break’?

“Jamaica, Queens was a residential middle class community originally dominated by Polish and Italian residents. After the 2nd world war Southern Black and Caribbean veterans, municipal workers and successful performing artists settled there. John Coltrane, James Brown, Arthur Prysock, Brook Benton and Buck Clayton were just a few of the jazz elite which moved out to Jamaica. It was called Long Island then. Louis Armstrong lived 10 miles away in Corona, Queens. The legends of the Harlem renaissance- Langston Hughes, Duke Ellington, Marcus Garvey and Joe louis were household names in my community and gave testament to this center of African American culture.

George Arnold Grant, Musical Director for Harlem’s Prince Hall Masonic Lodge on 155 Street lived a few blocks from me. He was my best friend’s father so it did not take long for him to pull a 14 year old alto playing Knoel into his Jolly Gents Jazz Band. Thus began my schooling in the repertoire and phraseology of the great big bands, the music of Louceford, Ellington, Basie, Chick Webb and others. I was always the young kid in a band of 50-70 year old jazz veterans, some of who actually played with those greats. We played for dances and cotillions (social dance gathering), talent shows and revues at community centers and ballrooms all over NYC.

My first jazz experience at that time was sitting in with the great alto/tenorist Harold Ousley at a festival block party in Jamaica. I would later start sitting in at the Village Door where master drummer Walter Perkins, bassist Lloyd Buchannan and pianist Hank Edmonds established the standard of bebop excellence in Queens seven nights a week.

The great baritone saxophone player Cecil Payne did a five night stint at a club called The Sparkle and there I heard what the baritone saxophone was supposed to sound like. A young 15 year old Knoel asked Mr. Payne, “What style of music do you play?” His reply was, “I guess you could say I play bebop.” And that was my real introduction to the music of Charlie Parker.

Now my sights turned toward the renaissance African-American village of Harlem as everyone’s dream was to play the famed Apollo Theatre.

Jamaica had a backyard (garage) band on every block at this time and by now, soul and R&B bands had begun to be listened to by the American public but they were all heroes and icons in the black community long before making it to national prominence – usually by way of mainstream radio punctuated by coveted appearances on the Ed Sullivan show or in the 70s on Soul Train, The Johnny Carson Show and other TV variety shows.

The gateway of black entertainment was the Apollo Theatre on 125 Street in Harlem. This was the African-American Carnegie Hall. So we all covered the top soul and blues hits of the day hoping to follow in the footsteps of others who had got their breaks playing dances in New York, then national acclaim through their original recordings like Earth Wind and Fire or Kool and the Gang or even the Jackson 5 who grew to become legends after their landmark concert at the Apollo, followed by their appearance on the Ed Sullivan show. We all knew Ella Fitzgerald, Redd Foxx and Richard Pryor leaped to stardom after being discovered at the Apollo.

My dream was to become a part of a new renaissance there, where my big band/R&B/soul/Latin experiences would make me the next Charlie Parker. I knew little of life and music but what I knew, even though small, gave me a thirst and enthusiasm that would only increase with each new musical experience.

Our collective style in Jamaica was a combination of the Jazz Crusaders, Kool and the Gang, James Brown, and Earth Wind and Fire with a good dose of Hendrix. Our sound has been termed as Jamaica Funk (after the hit record by Creative Funk in the ‘80s) and we all became known as the Jamaica Funk Cats, led by the Firebolts-a band that featured Alvin ‘Winky- dink’ Flythe on tenor sax, Marcus Miller on bass and Howie Gate on Guitar- all known as the baddest cats in the city. Flythe played so much like John Coltrane that when I heard ‘Trane I thought he sounded like Flythe but hey, I was only 16. What did I know? Marcus went on to produce for Q and Miles.

My studies of African American history, the civil rights struggle, the ongoing legend of the Apollo Theatre and the ‘word in the street’ made Harlem a must for me as it was for all progressive African American thinkers, politicians, artist ,poets, writers and of course musicians. The more I learned about my culture, the more the name Harlem was mentioned. The Harlem renaissance of the 20s to 50s was such a source of self- affirmation and pride for me even as I sat in public education classes that excluded my people from their place in the making of America. Smalls Paradise, Minton’s Playhouse (where Bird and Diz created bebop), the Apollo Theatre – they were there waiting for me to become the new herald of this great tradition. While Brother Kanya’s Tree of Life Bookstore, The Schomburg library, Liberation Bookstore, the conversations and conga playing at Marcus Garvey Park were there waiting for this young man in search of his culture. This was a time for me to begin to discover the great truths of the considerable contribution of African American genius in the making of America and the African Source of Ancient Egypt. I knew that the heart of jazz was Harlem; that jazz was the embodiment of African-American culture; that the oral tradition handed down from mother Africa had been transformed into the aural tradition of Jazz. I learned that the heart of this great tradition was Harlem.

On weekends I would take a visit into Harlem where I was a teenage member of the broadcasting pioneer/nurse Alma Nomsa John’s Talent Workshop on 125 Street. Here, young black youths were encouraged to hone their talents and pursue their dreams.

Yet I still had to continue my formal education, first attending Queens College, followed by the university at Old Westbury where my formal studies on the saxophone were honed by the pioneer of Jazz education, Dr. Ken Makanda McIntyre – a multi-instrumentalist and wood wind specialist/ composer and close associate of Eric Dolphy. (McIntyre played with Nat Adderley, Dolphy, Cecil Taylor and was a member of the innovative jazz Beaver Harris jazz group. He taught at Old Westbury for over 20 years). It was Makanda who would introduce me to the music of Sun Ra, always acknowledging Sun Ra as the high priest of music of the African-American tradition.

My music studies were augmented by regular attendance and membership at Billy Taylor’s Jazz Mobile Workshops on 127 Street. There I participated in classes given by Frank Foster, Jimmy Heath, Charlie Persip and other jazz masters. I was a member of the Jamaica funk network of young musicians in Queens- dancing, singing and blowing my horn for R&B parties at a time when people still hired bands to dance to. I developed a deep love of the stage and stage presentation, yet found it was the culture of jazz which provided a path for my actualization for it was in the music of Bird and Diz, Monk, Hawk, Bean and Chu that a young Knoel found his calling.

Between the ages of 15 and 17 I played in the gospel tent of evangelist Al McCleary who would seasonally visit my neighborhood casting out demons, healing peoples’ teeth problems and evoking the Holy Spirit to take possession of the congregation. There I became aware of the great power of music to evoke spiritual possession. While never becoming possessed myself, still the rapture of the music and people filled me with awe and purpose as I, the organist and drummer would play as one to conjure the Holy Spirit. The next time I would experience such intense spiritual passion was in the clubs of Harlem and the Bronx when the organ trios would hit that groove. Us horn players would walk the bar (walk through the audience and yes sometimes on the bar itself and the people would be wound in the groove, smiling, laughing, drinking joking and loving each other and the music). It was this all-encompassing love that the music created amongst the people; the love they had for us who played for them; the love they had for each other as they were in sympathetic vibration. It is this love we as musicians are able to create which binds us and the people into oneness of spirit.

Listen to Duke Ellington’s great concert at Newport 1958 and you hear that love, that groove exalting that landmark saxophone solo of Paul Gonzales. Look at the smile and finger poppin’ of Cat Anderson and you see hear and feel what I’m talking about.”

More of this Interview in Part 3