A tiny windswept island outside Helsinki is the backdrop for the second Odysseus festival. This intimate weekend affair is organised by the same collective as December’s week-long We Jazz Festival. The briefer summer event offers a wider range of music besides jazz, from African desert blues to Finnish retro soul and ambient experimentalists – all with an element of improvisation.

While the winter series is scattered across venues around the Helsinki area, this late-July festival was compact: a small outdoor main stage overlooking the sea plus two small indoor venues in centuries-old naval buildings. That was one more than last year, but there were still long queues to get into them – and getting a seat required skipping part of the main stage sets.

That was the only drawback of this event, which served up more than 20 acts over three days. There were also DJ sets, including DJ Old Crank, who played tasty jazz 78s from the ‘40s and ‘50s on a phonograph (with a discreetly concealed amp for outdoor listening and dancing).

The programming reflects the catholic tastes of We Jazz impresario Matti Nives, who hosts radio shows across a variety of genres along with producing albums and a magazine, running a label, shop and two festivals and other projects.

Saturday kicked off with a rollicking set of ‘60s soul-jazz from the Jukka Eskola Soul Trio featuring saxophonist Timo Lassy, drummer Teppo Mäkynen and funky organist Mikko Helevä. The first three have been playing together for about 20 years, starting with local legends the Five Corners Quintet. Lassy and Mäkynen also opening up on Sunday as a duo act, their long partnership clear in their instinctual ability to sound like a full band.

Mäkynen, a linchpin of 21st century Finnish jazz, provided bass parts with his drum kit alongside artful drumming – which he also showed off later in an electronic-edged solo set as Teddy Rok: Atonal Drums.

Lassy often played a call-and-response with himself, a propulsive dialogue between the lower and upper ranges of his instrument that tied back to the black church tradition that underpins much of American jazz. Two African bands also showed the vibrant cross-pollination between the music of their continent and the Americas.

Etran de L’Aïr from Niger played a blazing, youthful brand of desert blues, completing the cycle between West African music and the African-American blues that it influenced – which in turn also underlies so much jazz. There were even echoes of American bands like the Allman Brothers in their intricate guitar interplay. Their repertoire is more varied than other desert blues bands such as Tinariwen, but still some songs settled into an extended, repetitious groove that required patience. 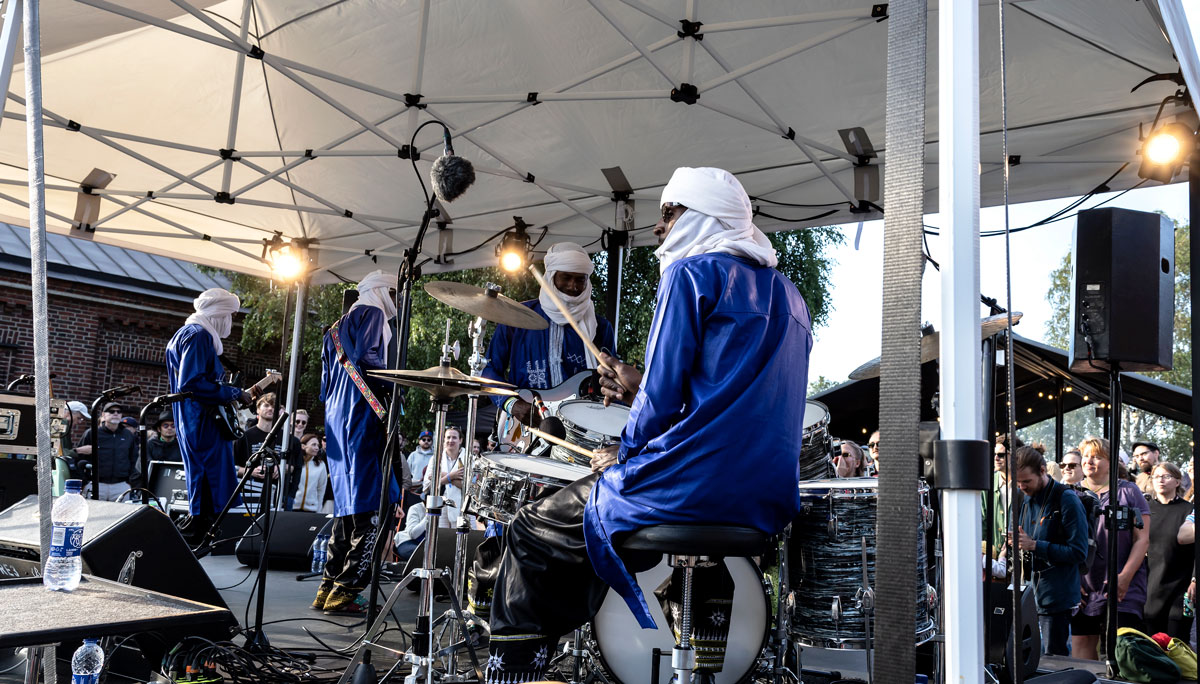 While the Nigeriens linked West Africa to American rock and blues, Hailu Mergia took that full circle to Ethio-jazz, which he helped forge half a century ago with the Walias Band. Now in his mid-70s, the multi-instrumentalist Mergia seemed to have slowed down a bit since his last gig here four years ago. Bringing new energy to the band was Canadian drummer Daniel Barnes, with a Tony Allen-like balance of tight precision and low-key shuffling.

Mergia’s solos on the Rhodes electric piano were minimalist and contemplative within a narrow range, while he sounded warmer and more propulsive when switching to the Hammond organ. Adding to the variety were a few tunes featuring the accordion and the melodica, all too rare in jazz.

There were more unusual instruments and sounds on the side stages, where nearly all the female artists were relegated.

Minna Koskenlahti and Marja Ahti conjured up sets of experimental dark ambient. The latter built up collages of found sounds including waves that seemed to seep in from the surrounding Baltic. Other sounds suggested an insect stuck in a room on a hot day – and the sudden silence and vicarious burst of joy and liberation when it finds an open window. A throbbing bass grew until it seemed to deliver a full-body massage and rattle ancient cannonballs in the cellar.

A jazzier small-stage set featured trumpeter Verneri Pohjola, who has a freer, darker sound than colleague Eskola. He provided a master class in the limitless potential of solo improv with electronic augmentation, painting spacey visual patterns in the audience’s heads. Beyond occasional tinges of Miles Davis and Jon Hassell, his sound has matured into something uniquely his own, subtle use of reverb and delay mingling with the cries of seagulls outside.

Back on the main stage, eccentric Manchester saxophonist and spoken-word performer Alabaster DePlume delivered a startling show that divided the audience, some rapturous about his verbal improv and others heading off to a side stage or bar, shaking their heads at his arch, self-absorbed ramblings (pro tip: repeating the f-word doesn’t make you edgy or artsy). DePlume’s sax playing was engaging though. His quirky blend of jazz, classical and folk ably carried by a local pick-up band featuring cellist Aino Juutilainen and drummer Joonas Leppänen. Their group Ainon played the previous day, likewise tapping into those genres and more.

Offering a more straight-ahead set in a side room was pianist Olli Ahvenlahti, whose career in pop and jazz stretches back nearly 50 years. He was backed by Helsinki stalwarts Jussi Kannaste on sax and Jaska Lukkarinen on drums.

Those two later joined Eskola and a group of stellar musicians from Chicago led by drummer Makaya McCraven for a bracing American-European hybrid. 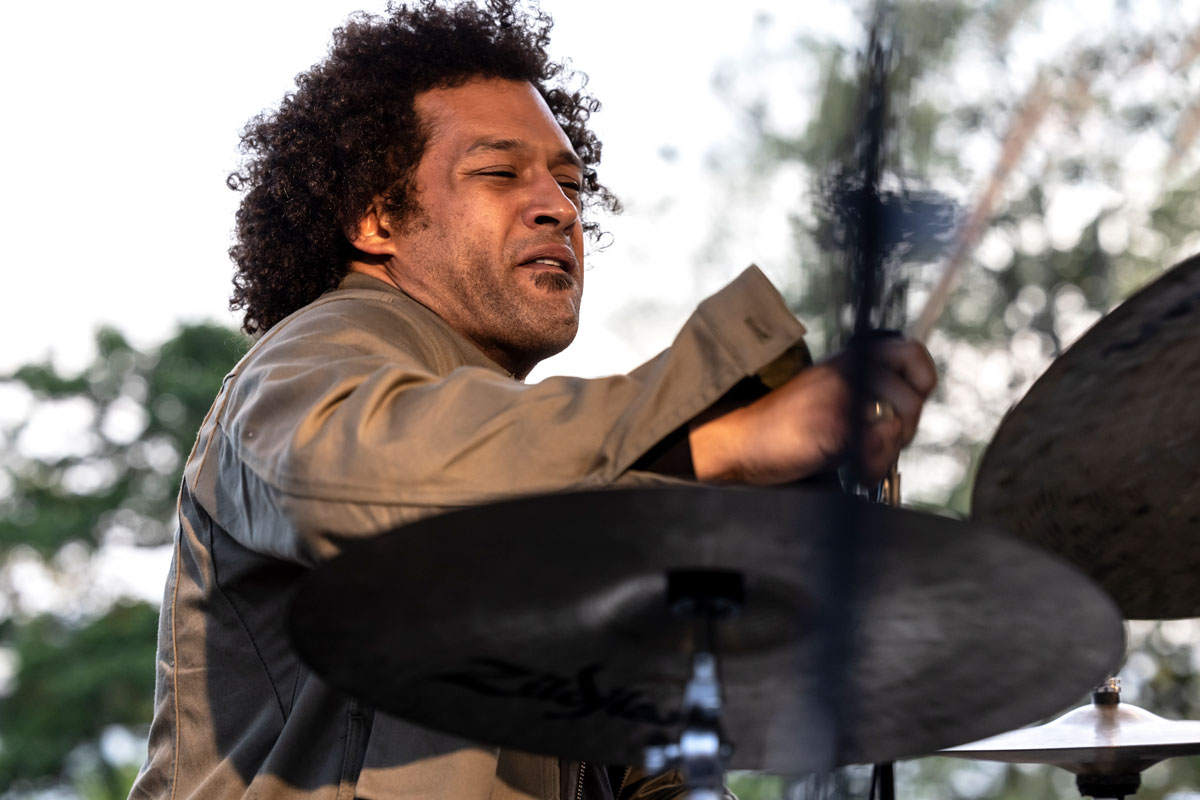 Twin drummers McCraven and Lukkarinen powered the machine ahead like a unstoppable juggernaut, the local lad impressively holding his own against one of the world’s best jazz drummers, sometimes adding squeaky toys lest things get too serious.

They set up a bedrock foundation for all kinds of interesting stuff happening on top from trumpeter extraordinaire Marquis Hill, bassist Junius Paul and guitarist Matt Gold, although the triple-horn attack got a bit tiring at times.
McCraven was back the next night for the closing set of the festival before heading off to Newport Jazz.

A Junius solo sounded like a tribute to recently deceased bassist Michael Henderson of On the Corner fame, while Gold replicated Jeff Parker’s angular licks on tunes like “Three Fifths a Man” from In the Moment while adding his own twists and influences from surf guitar to highlife.

The band played slinky, deep-in-the-pocket reimaginings of Kenny Burrell and Kenny Dorham tunes from last year’s Deciphering the Message. Those left the crowd happily dazed, with smiles that persisted the whole ferry ride back to the mainland.