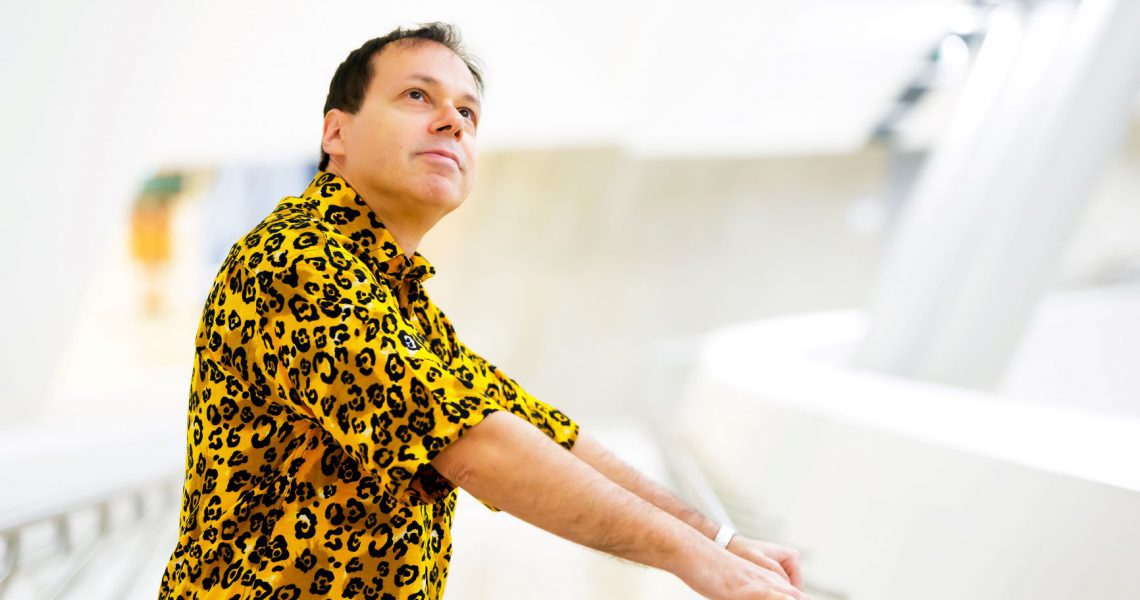 Lukas Ligeti is a composer, drummer, electronic percussionist and improvisor whose conceptually rich and genre transcending music is attracting increasing attention world-wide. Born in Vienna, between 1998 and 2015 Ligeti lived mostly in New York City before moving to teach as a core faculty member on the PhD programme ‘Integrated Composition, Improvisation and Technology’ at the University of California, Irvine. Fiona Mactaggart caught up with him on Zoom to discuss: his intriguing new album ‘That Which Has Remained…That Which Will Emerge…’ which was released on label col legno earlier this year; his emerging ‘improvisation through adaptive data processing’ music; and discovering new types of beauty. 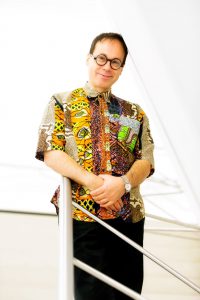 FM: Could you say a little about the residency that you did at the POLIN Museum in Warsaw, Poland?

LL: Well, I received an email that I opened by accident. Inside was a call for proposals from the POLIN Museum [which is in the area where between 1940 and 1943 the Warsaw Ghetto was situated]. I thought, that’s interesting, I made a proposal and it was selected! So that’s how I became an artist in residence at the museum!

LL: Very. I was thinking, I like working with speech and I love giving musicians information via headphone. I had never been to Poland before this. And my own Jewish heritage is Hungarian. But I was really interested in seeing how do people in a country like Poland, today, think about the Holocaust, about the state of Jewish life and culture in the country at the moment. I was curious. The people I interviewed ranged in age from their early 20s to 98, and I asked them to sing songs that they associated somehow with Jewish life as they know it. I oppose identity politics, because I think identity politics are divisive and harmful. The identity of the people I interviewed was not important to me. What was a criterion for me was, does a person feel that they have something relevant to say about Jewish culture and history and life in Poland. Then I made a score where I selected passages from interviews that seemed to me to be musically interesting, and I fed those passages into the musicians’ headphones and asked them to react to those passages in spirit. It was intended as a site-specific, audience interactive performance piece, where audience members could also pick up headphones. All the musicians had different headphones; it wasn’t the same sound for every musician! So, the audience could pick up headphones that would relay, for example what the clarinettist heard, or what the cellist heard. And some of the people I had interviewed came to the performance and started singing along with their own recordings; they had heard themselves! It created a really very intimate and beautiful atmosphere. We felt that it worked also as a piece of music in its own right, so then we went into the studio and made a recording without the audience.

FM: Fascinating! I understand it was recorded prior to the current pandemic. Regarding the pandemic, over the last year, how has it affected your work? How have you spent the year?

LL: Well, like anyone else you know who’s in academia, I’ve been teaching remotely. I was always very much interested in politics, but sitting at home a lot – very busy, but sitting at home – I’ve gotten very concerned about the political situation in the US, also in the entire world.  The worry about the state of the world that we’re living in has been much more debilitating than anything that happened to me personally over that time.

Also, I composed a piece for soprano and six instruments with a libretto by a contemporary Belgian writer, Francois Emmanuel. This is a commission from a festival in Brussels, Ars Musica.

I’m getting more into the electronic music again. I haven’t done so much with electronics for a few years and that came mostly out of a sense of frustration with where electronics have been developing, particularly with the use of smart mobile devices. I started something new with some graduate students at UC Irvine. It’s a new approach to playing in an ensemble using a MIDI. I’m calling it ‘improvisation through adaptive data processing’, and that’s an approach that I’d like to go on with. It’s pretty esoteric and in the laboratory stage at the moment!

FM: Do you have any other thoughts about future projects?

LL: Lots! One is that about four to five years ago I wrote a suite for my group Burkina Electric and a symphony orchestra, that was commissioned by the MDR Symphony Orchestra in Germany. It was very challenging to do this, and it turned out to be extremely gratifying. Now this year I’m going to write a new movement… and Burkina Electric will perform that, and some of the old movements as well, with the Brussels Philharmonic in Belgium. Otherwise, I’m doing a lot of work promoting new music in South Africa. It’s a time of new beginnings!

Also, I have a whole backlog of recordings that are at different stages of being finished and so I hope that there will be more of a steady stream of stuff coming out. Because the last couple of years I had no CDs coming out!

FM: Changing tack: I’ve always thought there was a particular thoughtfulness, a sense of your being informed by and going beyond, history.

LL: Well, I come from an intellectual family and see myself as an intellectual. My approach to music is a fairly intellectual one. I’m not going to say that I’m not at talented musician, I have a good ear, but really, I think that my strength is not in my, you know crazy chops; it’s more in the conceptual side of things.

My relationship to history is maybe not as fraught as that of many people who have a problem that they either become somehow captured by history, obsessed with craft and with history. Or the opposite, where they say I don’t really care about craft, or history, I’m just going to do my thing. I’m really neither of those two things. I love history and I think it’s very important to have a craft and a good knowledge of for example, musical conventions. But at the same time, it’s at least as important to think originally and do something new. That’s kind of what I do. But I don’t really do it in a way that negates history. I try to know a lot about history, then make something new.

For a lot of people respect is a very central thing. As for me, I respect all other artists and I respect history, but I don’t respect them to the point that I become a prisoner of it. So, it’s finding a balance between respect and irreverence. Maybe it’s due to having been brought up as a completely secular person.

FM: Your music certainly has a breadth to it, encompassing electronic music, marimba lumina, drum kits, improvisation, Burkinabe music… How do you manoeuvre within this diverse range of music? The wide range is a little bit unusual perhaps.

LL: Yeah, it is. And it gives me problems because people don’t know how to categorise my music and usually my music falls somewhere in between these categories. It’s just that I’m influenced by all of these different things. I’m interested in ways of thinking. I have certain interests, certain questions that are bothering me and I try to find solutions for these questions in different (musical) contexts. Then inevitably any solution I find actually creates more new questions! So, I’m a little bit like a scientist, I’m testing my hypotheses in different environments.

Fundamentally (my music is) actually all very similar, but then I put it in different contexts. It’s not so much that I dress it up in different ways, but I immerse these ideas, these images into different environments. Because to me, they’re not environment specific. There are much more fundamental questions that I’m asking, for example, how can we create consonances and dissonances of tempo, rather than of pitch. I can explore this question, for example in an African context, in a Western context, in a mixed context and my insights are going to be very different.

I think maybe as a consequence of starting to engage more with academia, I’ve become a researcher too. I’m very much inspired and influenced by musicologists, but I’m more what I would call a practise-based researcher.  I research the creative process and for me it’s interesting to put my creative process in different environments and see how it then differs: a comparative study of creative processes. Artistic research has become a big thing in academia and to me it’s a very, very interesting discipline. Just because it’s so new, nobody really knows what it is. To me it is, let’s say, the exploration of art from the inside, from the point of view of the creator, rather than from the point of view of the outsider, which would be the musicologist point of view. 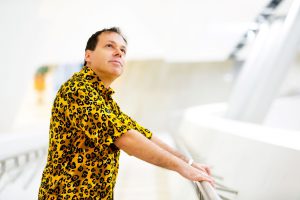 FM: Finally, how would you characterise your music or music-making?

LL: I think maybe the two things that are most important for me are originality. I try to really explore new territory, but not at the expense of beauty which is of course a very subjective thing. I want my music to be beautiful and innovative at the same time. And that’s not an easy thing because of course beauty is often dependent on understanding it in the scope of certain conventions. So then going against these conventions, but still making something beautiful is a challenge that I try to live up to. I think that some contemporary artists, not just musicians, are not concerned with beauty at all. They would say that to like beauty is conservative. But I don’t think that beauty necessitates being conservative. I don’t understand why music can’t be progressive and still be beautiful. Because it’s about the discovery of new types of beauty. So, do I succeed with my music and making something beautiful? I don’t know. But I’m actually more confident about the originality, than about the beauty. But at least I try!

Buy ‘That Which Has Remained…That Which Will Emerge’