During my own musical journey as a jazz guitarist I once had the luck to meet my absolute hero Wayne Shorter. The meeting happened back stage just prior to his last concert at Umbria Jazz Festival and despite my unannounced presence he was very gracious.

One thing he shared with me during our conversation was that he believed one of the most difficult things in life is to find people who share the same vision. I suspect he was referring to life in general and of course, this also relates to music. At this point you may be wondering why this is relevant to the review of this album, however, I’ll get to this later. 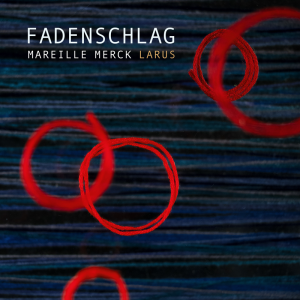 So, let’s take a look at the album. “Fadenschlag” is the debut release from the young Swiss based guitarist Mareille Merck and her band Larus. The band is led by Merck on guitar with Florian Bolliger (double bass) and Janic Haller (drums). The album, released on the German label Mons Records, features seven original compositions all penned by Merck.

Now, I will pretend to be professional and not shocked by the fact that I first picked up a guitar while at the same age as this very talented and already accomplished young guitarist. By, mentioning this I simply want to point out that at the tender age of 24, Merck has already developed a mature and original language on the guitar.

So let me return to the subject of vision! It’s undeniable that Mareille has definitely a strong musical identity expressed by her compositions and style but also by the work clearly done on developing the various sounds of the instrument which, in my opinion, points to a Jazz/Rock background and is perfect for this situation. Sometimes having a strong personality can be a issue when choosing your musical companions, it’s about the vision, about the way you collectively feel the music. Bringing this back to Mr Shorter’s comment, the three musicians on this album have without doubt nailed it as far as a collective vision is concerned and it’s exactly this aspect that attracted my attention. The trio seems to move like a single human being breathing and interacting; they seem to move like a team that has been playing together for years and have grown to know each other perfectly.

Due to this the music is like a deep sea which raises and falls in a constant alternation between tension and release. The atmosphere is always open, liquid, especially in two ballads I really loved: “Fjord” and “Woodland walk” where the counterpoint of the guitar plays a fundamental role.

If I have to express a feeling here, I would say that the band is trying to give a shape to water. It’s almost like the trio is an empty container that you can fill each time with something different. This sensation is present for the entire album with a perfect control of the polyrhythms that create interest and depth.

I truly enjoyed this album and can recommend it highly. Mareille Merck is a highly talented guitarist and composer and I’m convinced we’ll be hearing a great deal more from her in the years to come. I’ll also confess, in my own practice, I’ll be adopting some new sounds inspired by Merck.

Editors Note: Keep an eye out on this platform for a full interview with Mareille Merck in the next week or two.