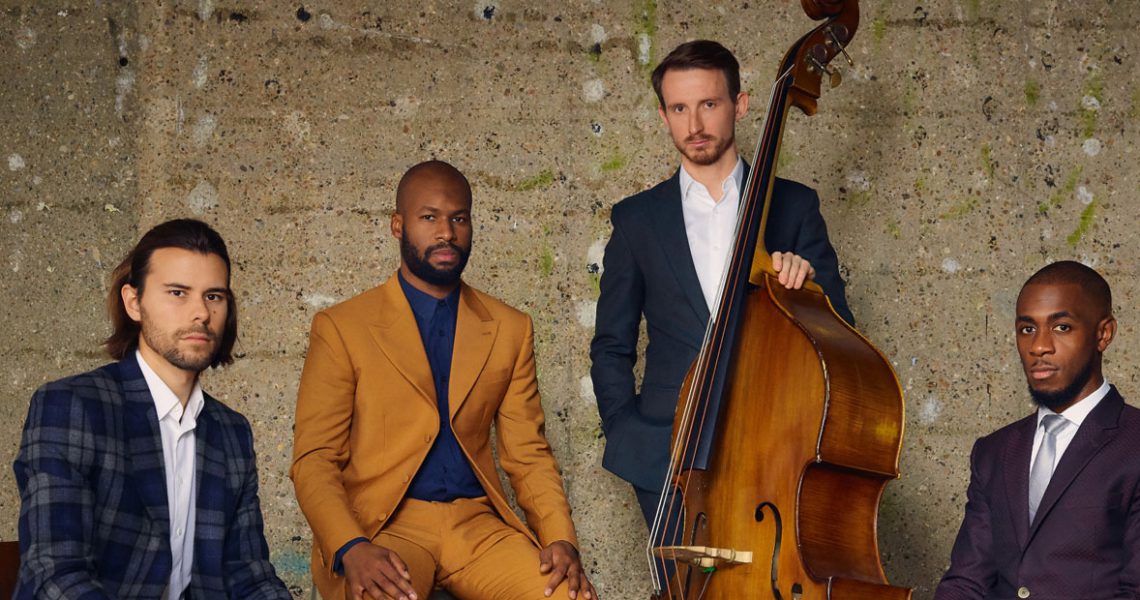 Empirical, the knack for pushing boundaries

With the UK political world fully paralysed by Brexit, the opposite can be said for the UK jazz scene. It seems not only to be flourishing from a creative aspect but also from a cultural export aspect. One need only to sample the line-up of some of the European festivals this summer to witness the surge of UK based acts on the program. One band that caught our attention earlier this year was the London based quartet Empirical. In May the band released part two of a double EP-set titled ‘Distraction Tactics’. This current EP follows the 2018 release of “Indifference Culture” that formed part one of the set. Both of these releases have a political undertone and is described by the band as a “musical response to the culture wars and political upheaval that have become the ‘new normal’ of the world in 2018.” Recently I had the pleasure of sitting and speaking with Empirical bassist Tom Farmer about the band, the new album and their innovative Pop-Up series.

The genesis of Empirical came out of the Tomorrow’s Warriors program, an innovative jazz music education and artist development program founded in 1991 by Janine Irons and bassist Gary Crosby. Now almost 15 years (and a number of incarnations) further the band has established itself as one of Britons leading ensembles. Tom explained “back in 2005 Shaney and Nathaniel played together in the Tomorrow’s Warriors band and after they graduated, they decided to form a band and called it Empirical. After gigging for a while they made a CD and brought it out on Courtney Pine’s label. That’s the point where I joined the band, I think that would have been around 2006. Back then it was a quintet and after about a years worth of gig’s in the UK and abroad we sort of went our own way. Then in 2008, we reformed the band, this time with Lewis Wright on vibes. I can remember we did our first gig with this line-up at the 2008 London Jazz Festival.”

Since the reformation in 2008, the band (now consisting of Nathaniel Facey, Tom Farmer, Lewis Wright and Shaney Forbes) has become known as an ensemble with a “knack for pushing boundaries”, not just musically but also in the areas of marketing and audience development. This can be evidenced by the 2016 project that saw the band establish a number of “Pop-Up” jazz lounges at London Tube Stations. In a bid to expand their audience the band and their management, who were inspired by the Pop-Up restaurant movement, decided that this concept could be applied to the jazz world as well. With an innovative idea and funding from the UK Arts Council, the band rented an unused retail space at Old Street Underground station in central London and transformed this into an informal Jazz Lounge where commuters could just drop in to hear the band live, buy CD’s, or just chat.

I asked Tom about the origins of this idea. “Well, just before we recorded the ‘Connection’ album we were looking to perform as much as possible to develop the music in a live setting before going into the studio. We’ve always liked the idea of doing repeat performances in one location but these days it’s hard enough to get one gig let alone a run of five nights in one venue. So, I had this idea of going into Foyles book shop on the Charing Cross Road, where they’ve got a very cool performance space up on the 6th floor. I just went in and asked if we could do a gig there every day for a week at 6:00 pm. As it turned out they were up for it, so we set it up and went for it. On Monday it was a bit sparse as far as listeners go but by Friday and Saturday, we had over 250 people in there. It worked so well that we thought this is a great idea, we need to do it again.” 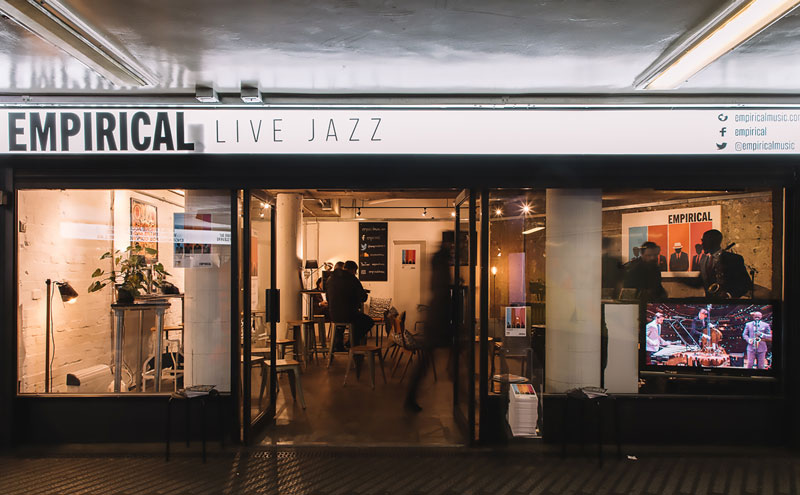 Claudia Kuss-Tenzer, now the band manager, happened to be one of those people that attended the Foyles gigs. At that time Claudia was a fan of the band and offered her extensive marketing skills to the band to develop the concept further. The basic idea remained but the concept was to formalize the idea, bringing some “Joined Up Thinking” as Tom said, to be able to capitalize on the marketing opportunities the project provided. Tom stated “So we came up with the idea of doing it in a train station or somewhere else that has a lot of passing foot traffic. Once we had the idea worked out Claudia then helped us with the grant application. Luckily the Arts Council gave us the green light and with this in hand, we started looking for a space to do it in. I have to say It was an amazing experience.”

There is no doubt that the project was a major success. During the six days that the Pop-Up was open the band played over twenty live sets to more than 3,000 listeners, many of them new to jazz. One of the highlights was the gig at 8 am for surprised morning commuters, as you can imagine a challenge for not only the public but also the band, musicians are not often known for being at the top of their game at 8 am! Having been in this industry for more years than I care to mention, I’ve always been under the opinion that the best way to build a fan base is to take the music to the people, with so much music available to the public these days, sitting back and waiting to be discovered is a recipe for oblivion. It’s “out of the box” projects like this that can position a band way ahead of the competition. 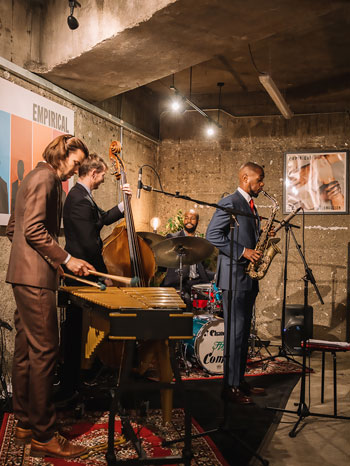 Since the first Pop-Up series, the band has taken the concept to shopping centres in Birmingham and Berlin (as part of the JazzFest Berlin) and returned to Old Street Underground station.

I wanted to take a step back and ask Tom about the new EP. Having mentioned in the introduction to this piece that the double EP-set had a large social commentary aspect to it, I was interested to know more about this. However, I was also interested in asking about the choice of a split release and the motivation behind this. Speaking of the meaning behind the music Tom explained that the band had been doing a lot of rehearsing and had come up with a few different directions. One was as he described rather “Colemanesque” with a lot of cyclical rhythmic aspects while the other was far more improvisational and open in nature. Eventually, they decided to take the latter into the studio, develop it and see what they came up with. During the recording process, they realised there was in fact to halves of a similar idea here. Tom said “It’s all about commenting on the inhumanity and political chaos we see around the world. We realised what we do as improvisers are actually transcending all those issues, so we framed it as a response to all these social ills.”

Regarding the split release, Tom explained that the band was not looking to put out another full album as yet, while there are plans for a new album there still needs to be a number of things put into place. The goal of the EPs was purely to make the music available to their fan base. Both EPs largely document what the band had been doing during the Pop-Ups and with the interest, they generated there was a need to bring something out in a timely manner. “We needed to keep the momentum going while the plans for a full new album are being developed said, Tom.

Currently, the band is in discussion with a number of European labels and partners and while at the moment Tom was unable to give more details he did say they hope to be able to announce some news on this in the near future. Tom went on to say “Once we have all this in place we want to look at producing the next full album, maybe this time with a guest. We’ve had this idea of connecting with someone of the older generation. The reason behind this is that the nature of the music we play is very connected to the tradition and in particular the 60s so we’d love to work with a guest that lived through this period. We’re not just looking to have someone show up at the sessions, record and then head off. We’re looking at it long term, almost from a mentoring perspective. The idea would be that we would work together for a longer period of time. There are a lot of plans, we’ll just have to see what comes to fruition.”

When speaking about the band’s plans moving forward Tom stated that the focus at the moment is to expand the band’s reputation internationally. Earlier on in the band’s history, they toured extensively in Europe as well as a tour in the US and Canada where they performed at eight of the JVC festivals. These tours were quite early in the band’s existence and since the line-up change in 2008, the focus had been very much on the UK market. Tom went on to say “We’ve now reached a point, with our new management in place, where we feel the time is right to get serious about touring again.”

By the time you read this article, Empirical will have just returned from a short US tour and a performance at the Edmonton Jazz Festival in Canada. The tour kicked off at the Rochester International Jazz Festival and then back to New York city for some club dates including a number of performances at Dizzy’s before closing the tour out in Washington DC. Back in the UK, it will be business as usual and according to Tom, there will hopefully be more European dates in the near future.

Whatever the future brings for Empirical you can bet it will be innovative.

Empirical’s latest release “Distraction Techniques” is available digitaly and as a limited edition CD here. More Information on Empirical can be found at their Website.