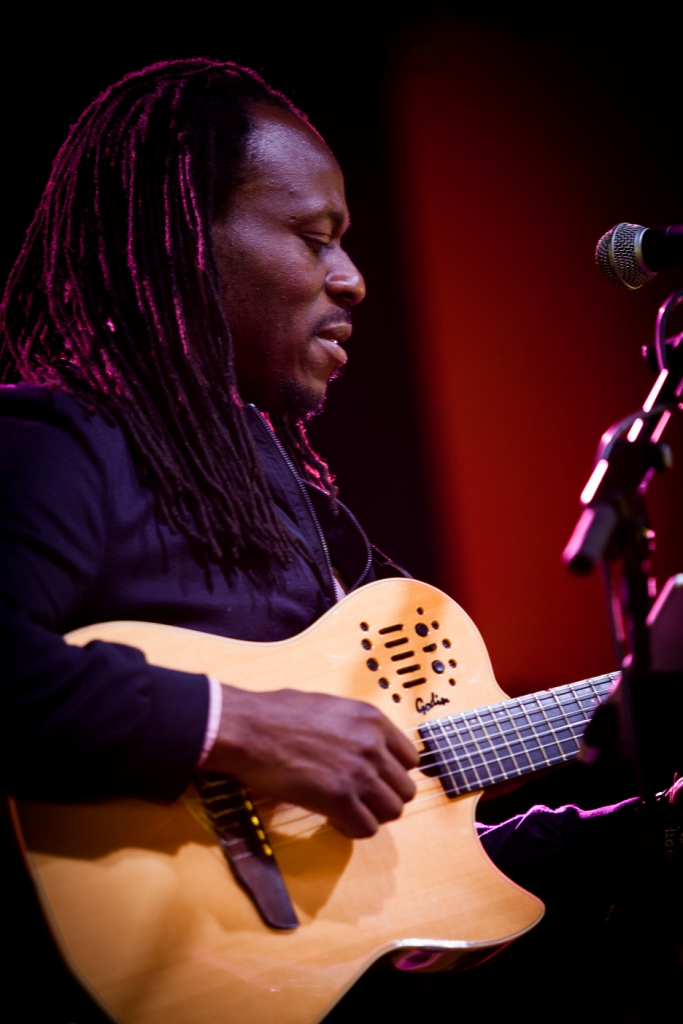 Nigerian born, London based, Femi is a striking guitarist with a refreshing attitude and a catchy smile.  As my chat with him will prove, he is a very down to earth man which oozes creativity and inspiration.

EY – Femi, first of all , thanks for your time.  You are a multi-talented guy, which is your favourite skill amongst the writing, arranging, producing, etc?

FT – Oh, wow, ok, good question, you know nobody had asked me this before.  Now at this point in time?  I really am into arranging.   You kind of feel like you have all this power. I got into it slowly along the years, you feel a bit like a deity because you can tell others what to do, how to do it.  It’s funny, but also that meant I have had to learn about other instruments, too.  So arranging is my favourite at the moment, but you know it changes all the time.

EY – I would like to talk about your origins in a moment, before that, I would like to discuss about cooperation work which spans a wide range, from Courtney Pine, Soweto Kinch, Amy Winehouse, George Benson and I could go on…

FT –  Wow, ok, how do I choose who inspired me the most? Well, I think they all did but in different ways.  Soweto Kinch, obviously, we are the same generation.  I love Soweto’s tenacity, the ability to keep on finding a new way to say his message.   That really inspired me.

Courtney’s energy is striking, and he requires the same energy when you are playing with him.

I love Amy’s writing, again it was very inspiring.  I love the way she could view the world from a very specific view point.

George Benson was one of the highlights: I spent years listening, learning from his stuff, and then finding myself in the same room as him and jamming with him, was like “yeah!”

So, you see, to choose one would be like asking a mother to choose his / her favourite child…

(at the point, we both laugh and I decide not to press Femi anymore, he is genuine and dedicated but also incredibly humble).

EY – Last November, as part of the EFG London Jazz Festival, you supported Cécile McLorin Salvant.  what was the highlight of that gig and how did it feel to play at such a venue?

FT – When I walked into the hall it felt, this is going to sound silly, like I was in a holy place, i don’t know, there is something spiritual about that venue, and on the stage  once I started playing, although it is quite spacious, it really felt intimate.  The sound is special, it carries nicely, makes everything sound warm.   The highlight was, it was easy to send a message to the audience, it felt easy, and Cécile is just awesome, I respect her a lot, but it did feel seamless, easy.

I just had a sense of reverence.  It just felt like being in a holy place, where a lot of people have performed, and that energy has remained.

EY – Your third album which was released in May this year, “Music is the Feeling” is brilliant.   I love the title, it has important connotations for me, personally.   Can you expand on how this work came about?

FT – Yes, when I started working on it, I had a completely different idea about it, it is when you realise you have all sorts of musical influences.  But for me music to play a style convincingly, it’s got to feel a certain way, whether it’s afro-beat or jazz.  Music could be categorised, but in the sense that how one listens to it, to different artists and one discovers how it makes one feel when it’s played.   Whether it’s Coltrane or Joni Mitchell.  It’s like having different artists suddenly clamped together in a different style

EY – Let’s talk about your Nigerian roots, I think surely that must come into your music, does it always do so or do you find having to edit it out?

FT – I think it’s always been there, even when I play other people’s music, I have to be careful not to let it out of the cage too much, just because it’s always there.  I started playing with lots of West African stars, I didn’t start with guitar for example, but rather with Nigerian hand drums in fact called “akuba”.   so when I write music  now no matter what I do, it’s always lurking in the background, and then i have  to decide whether to augment it or not, but yes, those influences are always with me.   Depending on what I want to write about or express, there is always a rhythmic element inside.

EY – Playing at Love Supreme, how did you prepare for the Festival, if you did?

FT – I thought about that: this is the biggest festival I have played so far at as myself under my own name.  I did a residency at Ronnie Scott’s for a couple of years which taught me about the relationship with an audience.  I am used to doing clubs and small theatre venues, but playing at a festival is a completely different thing especially of this kind of magnitude.

So I sat at home and thought what I should play, but then said nah, I shall just feel the vibes of the people and let the feeling come through.  I have always subscribed to the ethos of going with the energy that’s in the room. At times when I have over prepared, and if I don’t do what I have prepared, I feel as if I have failed.  Sometimes the gig and audience surprise you, a lot of my favourite artists interact with whatever is in front of them.

EY – One last question, Femi, and one that I ask everybody as it intrigues me…. How do you relax, if you do relax?

FT – Oh yes I definitely do.  You know?… I really love baking.  First of all, I love cooking, but recently I got into baking.  I cook all the time, but if I have had a hard day, I can’t wait to get home, get my apron on, get the flour  out and bake something, anything.   Currently my favourite thing is lemon drizzle cake.

(At this point I ask Femi jokingly whether he is going to start a production line, bringing some cakes at gigs, we all laugh, the thought is too good and very tempting at which Femi continues by saying that perhaps, yes, he should have brought some!).

I did a gig recently in London, a solo gig, and I had baked a whole bunch of chocolate chip cookies, I handed some out and as I looked up as I started playing the first tune, there were big smiles all round on the faces of those people, so I thought ah, this is how I am going to get them, by baking cakes (laughter all around!)