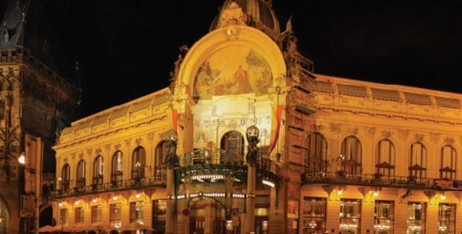 The Prague Proms is a summer festival bringing top-rated international artists from the music worlds of classical, jazz and film scores to various venues across the city, but the centerpiece concerts are mainly held in Smetana Hall in the Municipal House, which is an Art-Nouveau landmark, with works by Alphonse Mucha, among others in the interior. The building is also home to the Czech National Symphony Orchestra, led by the trumpeter Jan Hasenorl, who is also the organizer of the festival.

Prague Proms opens this season, Saturday, June 18th with music by Frank Zappa, played by Orchestra en Regalia, which includes former members of either Zappa’s band or from Zappa Plays Zappa. The group includes Jaime Kime (guitar), Scott Thunes (bass), Joe Travers (drums), playing with the Czech National Symphony Orchestra, conducted by American Sarah Hicks. And this concert will be at the Rudolfinum, a regal neo-renaissance concert hall and gallery complex, which opened in 1885.

An equally intriguing “opening concert” just a few nights later, Tuesday, June 21, at the Municipal House will be by the Viennese septet, Mnozil Brass. The band has a curious Czech name, “Mnozil” but according to Roman Rindbergeer, one of the trumpeters of the band, the name comes from a local pub.

“Twenty-four years ago, the band started to meet and play once a month in a pub called Josef Mnozil’s. It’s a restaurant opposite the music university, and so it was a kind of melting pot for the music students,” says Rindberger.

“Mnozil is, in fact, a Czech name (and word), but there is no other meaning besides this,” he adds.

The music university, which Rindberger refers to was the renowned Vienna College of Music, and since 1992 the septet (led by Thomas Gansch on trumpet and “Gansch-horn”), has been creating a curious combination of classical, jazz, and pop music performance with slap-stick routines.

“A big influence for us is Spike Jones and his City Slickers,” admits Rindberger. “It is good old entertainment, with lots of skills and great ideas.”

Mnozil Brass will be performing their show “Yes Yes Yes” which implies that they will be playing many of their hits, including “Bohemian Rhapsody,” “My Way,” and “The William Tell Overture.”

“We have been playing our latest show over a hundred times all over the world from the United States to Japan,” says Rindberger. But this will be their first performance in Prague.

Meanwhile, the jazz highlights for this year include Dianne Reeves, June 24th, at Smetana Hall, and the Joey Alexander Trio, July 5, and the Joshua Redman Quartet, July 11, both at the Loop Jazz Club (Hybernia Theatre), which is just across the street from the Municipal House. Then the Australian trumpeter James Morrison has a special program “Jazz from A to Z,” July 17, at Smetana Hall.

Altogether there are 21 evenings of performances and the closing night features another jazz highlight of the festival. Melody Gardot will perform music from her latest release “Currency of Man” in—where else?–the fabled Smetana Hall at the Municipal House in Prague, Tuesday, July 26th.