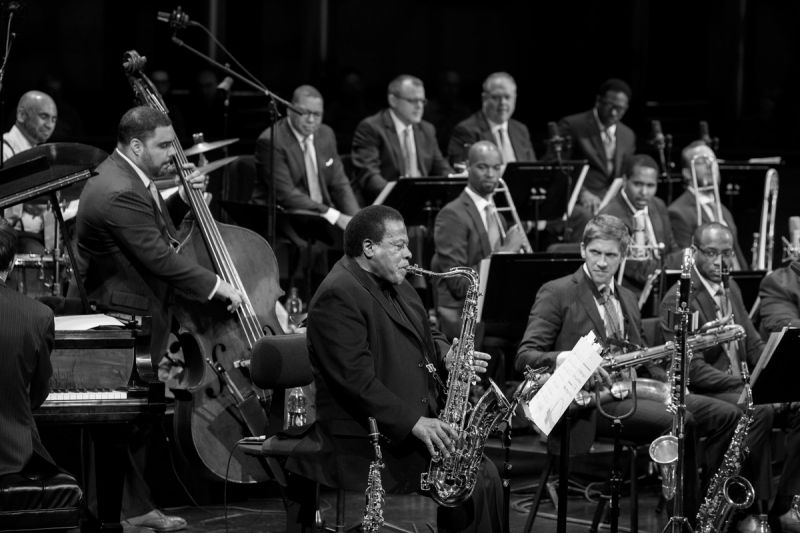 The Barbican Centre, Mr Wynton Marsalis with Mr Wayne Shorter and the Jazz@Lincoln Centre orchestra (J@LCO). Could it get any better?

The Barbican Centre, Mr Wynton Marsalis with Mr Wayne Shorter and the Jazz@Lincoln Centre orchestra (J@LCO). Could it get any better? The 2000 seater auditorium was full and as the lights shining on the stage changed colour a hush fell on the audience. Members of the orchestra ambled onto stage, Wynton Marsalis taking his place back row with the other trumpet players, as is his norm. Soon 15 seats were taken, each musician dressed suavely in suit and tie, their tie colours indicating if they were horn or rhythm section. Only 1 seat, stage right of the orchestra remained unoccupied. Claps and whoops went up as Wynton introduced the orchestra and then came the words most were waiting for. “Ladies and gentlemen, welcome to the stage Mr Wayne Shorter”,  and he was there, carefully walking the few yards from side door to stage, settling down and setting his saxes on their stands. Wynton said, “tonight, we hope to swing and entertain”. What followed did that and so much more.

The opening number was ‘Yes and No’ (from the album Ju Ju (1964)) and Wayne Shorter gave a devastating delivery of a solo, setting the standard for the rest of the evening.

There were two sets, delivered with professional fluidity. The numbers were a celebration of Shorter’s music and each was arranged by a different member of the Jazz@LCO.

What added to the experience was that Wynton introduced each number, giving a brief history of the thoughts which were going on with Wayne at the time, the album it was first released on and who had arranged the version tonight. Wayne spoke not a word the whole evening which maybe was disconcerting but pretty much accepted. From the arranger’s point of view it sort of went like this. “If I arranged the piece, watch me – check my waving hand for timing – except when I am playing my own instruments, then you are on your own but keep up and watch for my signals”-  and it worked. What is striking about the J@LCO is  how in tune with each other they are and also how respectful they are – of Wynton and, on this occasion, Wayne Shorter but also of each other. As each arranger dictated the timings and (roughly) had control, the others watched, took their cues from him and obeyed. With every soloist all heads turned towards them, particularly noticeable when the piano, bass or drum had a solo as they were to stage right of the orchestra and all eyes tuned to them, heads bopping, fingers moving, feet tapping, always respectful and listening. The rapport was tangible, the grinning incessant.

Wayne Shorter’s playing is wonderful. At times he plays with the energy of a demon possessed soul, screeching, reaching notes which no soprano sax (or tenor, depending on which he was playing) should reach and the speed with which his fingers worked the keys was astonishing. His saxes seem to hang off his body like natural extensions, so entwined are they with his being. Once or twice, after a solo he would look at his sax as if to ask, “and what did you just do?” His spirituality comes across in his playing too and, as I looked around the auditorium I could see it was not just me who felt that.

The stories behind the numbers were interesting. Wayne wrote music for the ‘3 Marias’ when he felt moved by women who fought for human rights (and they were all called Maria) and ‘E.S.P.’ when he was wondering whether ESP was possible – he now believes it is if we get rid of everything else in our minds- or when he was moved by thoughts of life and death in ‘Armegedon’. They are the thoughts of a spiritual, thoughtful musician, inspired by all that makes man kind and his music reflect those thoughts.

If I tried to describe the beauty of some of his phrasing it would be ineffectual, like a child thrashing with War and Peace. There are no words to describe what happens when Shorter closes his eyes, takes on the music and blows. It is surely magic and the best leveller between 2000 people from all walks of life and of all ages who had turned up that evening.

The music was, at times as soft as a lover’s tentative first caress and at others filled with raw energy like a raging larva flow. Every player in the Jazz@LCO is a virtuoso and the great thing about is how each musician is used fully. The arrangements were different and reflected the varying musical backgrounds or preferences of the musicians. Some were straight and direct interpretations whilst others poured in a measure of anarchy and a touch of mayhem which gave the pieces a new and different life. Wynton’s trumpet playing is extraordinary. At times he has an Armstrong feel to his accents but most of the time it is pure Marsalis. He soars, he roars, he whispers, he shouts and squeals like a banshee; the dexterity of his fingers is something to behold. He is one of the best trumpet players in the world, period.  However, the undoubted star of the show was Wayne Shorter. As he played the years fell away, the energy was palpable and his interpretation and understanding of structure as well as his unparalleled improvisational interludes are beyond compare. During ‘Contemplation’ he took my heart and wrapped the music around it, bringing a sense of raw and unbridled emotion, the strength of which I have not felt in music for years. I was smiling constantly and many members of the audience sat forward in their seats, straining to catch every last note.

Wayne Shorter was, of course, a member of Art Blakey’s Jazz Messengers but any preconception of a man held back by any particular style, conformity or of an era are quickly dispelled. Shorter’s music moves with the times, is written from experience and cannot be shoe-horned into a box under any circumstances.

30 years separate Marsalis and Shorter but when they play neither time, stylistics or anything else matters. They, along with the J@LCO are united by the music, their undoubted mastery of their instruments and the jazz music they play. Whilst individuals may shine like beacons from time to time when given a solo, the whole orchestra creates incandescence on stage.

The concert finished with a standing ovation and the orchestra departed. Then, from the wings came Marsalis, Carlos Henrique, Dan Nimmer and Ali Jackson. This quartet of trumpet, drums, piano and bass treated the audience to a wonderful, playful mini-set. A joyous conversation was started, first by Wynton with his trumpet, tripping up and down the registers, speaking through his instrument in joyful abandon. He was joined by the double bass. Then Wynton stepped to one side and the drum and bass struck up a wonderful to-and fro, swapping tunes, imitating rhythms, with the piano joining in as formidable back up. Then all 4 players treated us to a short but inspirational number to finish.

The whole evening showed how the J@LCO do jazz and it is good, very good. Wayne Shorter, once a jazz messenger, excelled and showed us he is still very much a messenger of jazz.