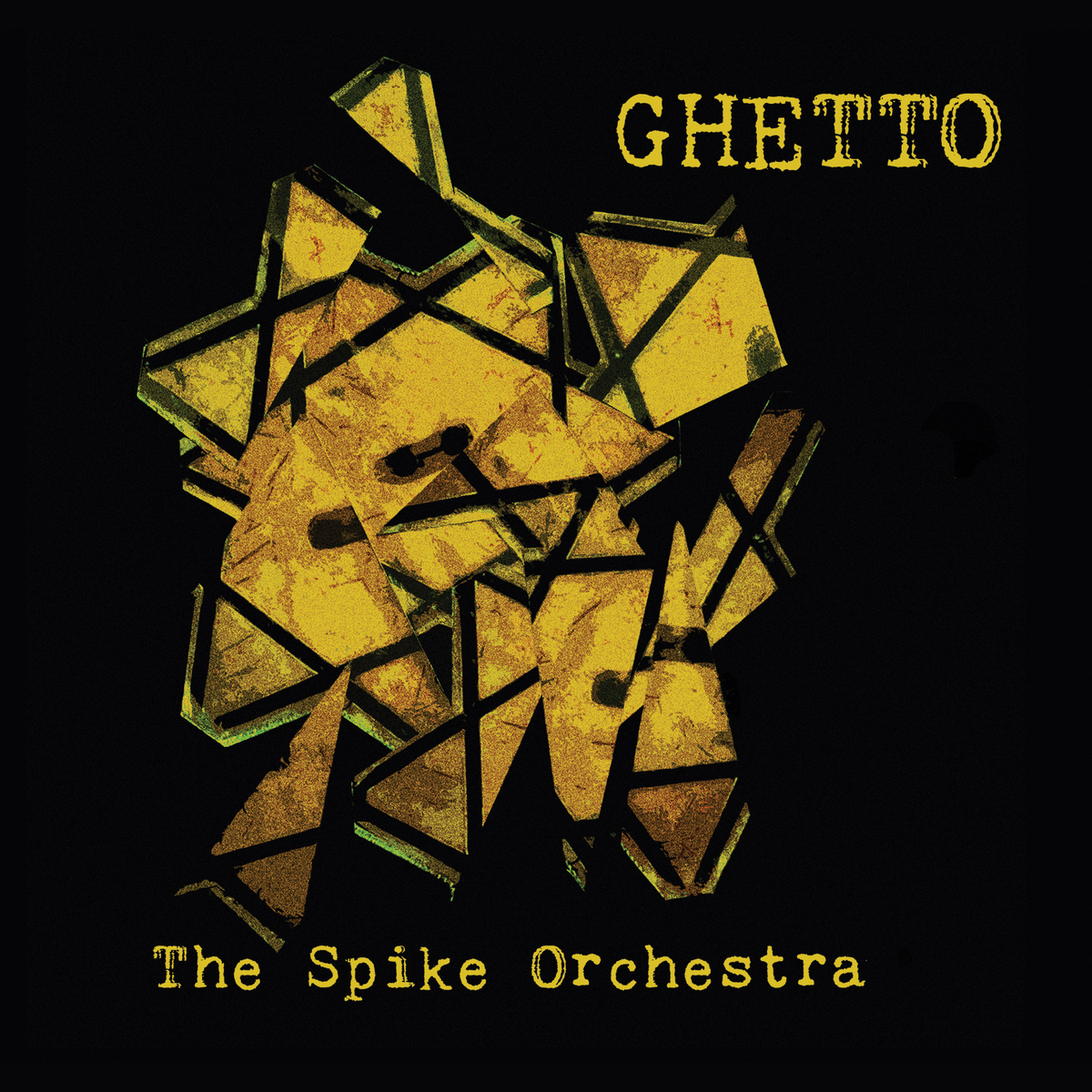 The Spike Orchestra was formed in 2011 by composers and leaders Sam Eastmond and Nikki Franklin.  As well as the 22 strong orchestra, the album introduces the 6 piece Spiketet and a duo of Nikki franklin on vocals and Sam Eastmond on trumpet. The Orchestra is nominally based around a standard big band set up of a 5 piece rhythm section with 11-16 horns plus Sam on trumpet and Nikki on voice. Their only working premise is that they only play their own music (no standards or arrangements) and no lyrics. Their influences include John Zorn, Carl Stalling, Frank Zappa and Duke Ellington we tend to operate in either Radical Jewish Culture or Cartoon territory stylistically all filtered through jazz and improvised sensibilities as they juxtapose free sections with orchestration.

They have played at the Forge in Camden, The Vortex and the Bulls Head. The Ghetto album is a suite inspired by the Warsaw Ghetto Uprising of 1943 (Sam Eastmond says he has always been led to believe by his Grandfather he had family who were inside the Ghetto), featuring the big band, a sextet and a free improvising duo of Sam on trumpet and Nikki Franklin on vocals. The suite is a narrative linear work inspired by these events. The album has been recorded and released this entirely independently, self-financed and with no label or distribution. The orchestra have found it tough getting started but, as Sam puts it ‘some momentum is starting to build’. They are currently working on a new release – with a label this time

From the very first, Ghetto makes you sit up and listen. It opens with ‘Life Before’, played by the Spiketet it starts as a fugue begun with the vocals of Nikki Franklin weaving the way to introduce the accordion of Mike Guy, over which the violin of Dan Oates soars with a beautiful, emotive melody interwoven with voice and accordion, sax and trumpet to create an image of Eastern promise. The promise develops further in track two, ‘Construction’ where the intro of voice and trumpet give way to a delicious melody developed by the whole orchestra over a driving, rhythmic undertone of a sonorous 2/4 beat which entwines the entire piece. Trumpets unite to introduce a delightful interaction between voice and sax leading to a sax solo from Mike Wilkins where he takes the theme, picks up the beat and spins away, soaring, spiralling, rattling up the keys like a man possessed, tweaking notes out of the high ranges and making the sax sing like a musical demon.

Track 3 is ‘Life After’ (Spiketet) and is started with Dan Oates’ violin taking the theme, joined by trumpet, voice and Pete Cater on drums before the whole Spiketet back the vocal of Nikki Franklin. Franklin’s vocals are emotive, raspy, growly and ethereally beautiful, reminiscence of Nina Hagen in places but somehow not, very much Franklin. This is followed by an interlude, ‘Child Smugglers’ (duo) where Franklin’s vocals work beautifully with the interpretive trumpet playing of Sam Eastmond. ‘Underground’ is played by the whole orchestra and is a rip-rollicking tune, picked up, thrown from instrument to instrument, played with a while and then tossed to another – beautiful- and the solo and duet work by Jon Stokes and Ben Greenslade-Stanton on trombones is divine. The middle section changes pace and is a lovely pick-up section from the brass section of the orchestra with a solo from the guitar of Moss Freed. This is a number of many parts, using the entire orchestra. ’Life Inside’ (Spiketet) starts with the long, single held notes from Oats’ violin, before the vocals, trumpet, bass and percussion add their sounds, finishing with a short but very sweet melody from the violin. ‘Starvation’ (duo) resonates with emotion, trumpet and voice playing off each other to evoke a reflective atmosphere. ‘Trains’ is a track from the whole orchestra and is driven by counterpoint rhythms between the brass, bass and drums, before a lovely section where the orchestra descends harmonies in unison. Then comes an extraordinary solo from the soprano sax of Nick Blake’s ,followed by a return to the main rhythm and theme from the orchestra – this is over 10 minutes of simply great music.

‘Pesach 1943’ (duo) veers towards jazzy, swing at several points point but is quickly reined in to a more avante-garde style, both styles work due to the intuitive interpretation of what the other is doing, or about to do, by vocals and trumpet.
The final track, ‘Uprising’ is introduced by the orchestra and sets up a wonderful conversation between drums, bass and trumpet with solos from Pete Cater on drums and Sam Leak on keys.

This is an album which veers from ethereally beautiful and emotive to driving, snarling, avante garde precociousness. From the off there is a cohesion about the sound, a sense that the musicians are in tune and listening to each other, from the delicate tickles of the quiet sections to the full, brassy blast of the orchestra en-masse, this is an album which grabs attention – beautifully produced, there is a strength and drive to this music which lifts the listener.
There are lovely moments when the whole orchestra unites to create a wall of flowing, moving sounds others where soloists drift away, spiral up and out of the background and create moments where the atmosphere changes and you are drawn into the special world which is Spike.

You get the sense of something quite special happening here. Sounds and pictures are woven by the orchestra and the duo create images of other worlds, fleeting souls passing through, stopping momentarily and then moving onwards. There is texture and richness here, The