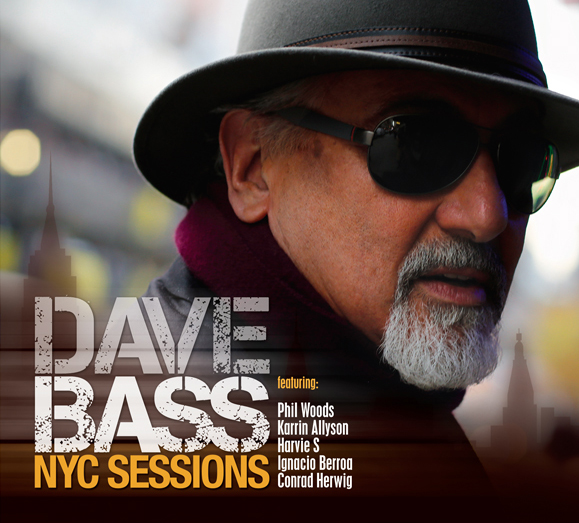 By DAN BILAWSKY | Courtsey of All About Jazz

Life has a funny way of bringing us back to what we love. Need proof? Just look at Dave Bass.

After starting on a musical path in Cincinnati, heading to Berklee for a spell, studying with George Russell and Madame Margaret Chaloff, touring with vocalist Brenda Lee, and setting up shop in the Bay Area, where he had an opportunity to perform with stars-to-be like Bobby McFerrin, Bass walked away from music. After fracturing his wrist and hearing that he may not be able to play again, he didn’t have much of a choice, so he did the sensible thing: Bass became a lawyer, eventually rising to the position of Deputy Attorney General in California. But the draw of the aural arts pulled him back in decades later. In 2005 he started playing again, in 2008 and 2009 he recorded his debut album, Gone (Self Produced, 2010), and in 2012 he recorded this follow-up.

NYC Sessions is a trio-plus-guests recording that finds Bass in some very good company. The core trio of Bass, drummer Ignacio Berroa, and bassist Harvie S brings a consistent sound to the project while notable guests—saxophone great Phil Woods, vocalist Karrin Allyson, and Latin jazz trombone heavies Conrad Herwig and Chris Washburne among them—bring variety. Bass’ love for Latin jazz, straight-ahead sounds, and late-night balladry merge in his original music. One song might follow a mostly straight-and-swinging course with slight detours (“The Sixties”), another might be bossa-like in its bearing (“Lost Valentine”), and a third may be Afro-Cuban all the way, but they all seem to come across as musical kinfolk in the way that Bass presents them. Or maybe its just the manifestation of that consistent trio sound that gives that impression.

While listeners can focus on the trio at play (“My Foolish Heart”), Bass prefers more inclusive, guest-friendly settings on this album. There are vocal features for Paulette McWilliams, both swinging (“Since I Found You”) and soulful (“Just A Fool”) in nature; flute, percussion, and trombone-enhanced Latin music that goes from cool to hot (“Dark Eyes”); smoky and evocative settings that find Woods in fine form (“Silence”); and pieces that put Allyson in the position of storyteller (“Endless Waltz” and “Lost Valentine”). When all of it is added together, a picture of a confident and versatile pianist-composer emerges. Bass can shoulder the weight of a song, deliver a rhapsodic introduction before fading into the fabric of the music, support and assist singers as they cast their spells, run with the baton when the solo spots arrive, and be a team player when the music calls for it. He may have wandered away from the piano during those lost musical years, but the piano clearly never wandered away from him.