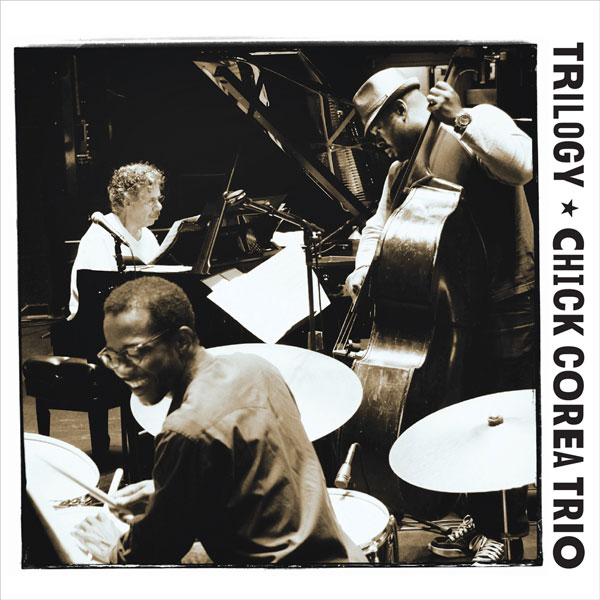 One of the best concerts I attended in 2014 was the performance of Chick Corea and Stanley Clarke at Ghent Jazz Festival. The duo gave a thrilling show where the many years of collaboration and creative relationship between pianist and bassist were celebrated.

One of the best albums of 2014 is “Trilogy” by Chick Corea. The triple CD set was recorded live all over the world during performances in 2010 and 2012 with bassist Christian McBride and drummer Brian Blade. The three Americans always play diligently and with their talents the outcome is no surprise: A superb album.

Corea calls the trio experience with McBride and Blade “a joyful exploration,” adding, “There’s a certain chemistry that happens, which is really difficult to describe – it’s simply that thing that happens when the three of us get together to play. I know I find myself trying things that I wouldn’t normally try. The game of live performance – for a performer and a listener – is one of the most basic human pleasures. For me, certainly, the best and most rewarding thing I know to do in music is to play live for a live audience. And no matter how recordings and the mass consumption of music evolve, the fundamental musical experience will always be a live performance. A live album like this is the next best thing to being there, a snapshot of special moments in musical time that we can share.”

Meanwhile, “Trilogy” was nominated for two Grammy Awards 2015: Best Jazz Instrumental Album and Best Improvised Jazz Solo ( Chick Corea in his composition Fingerprints ). Winning a Grammy is not new to Chick Corea (1941). He has twenty. The result of a successful career, which spans more than fifty years now . He is one of the most influential jazz pianists of the moment. His compositions have certainly carried to his fame.

Nice detail: on the first CD of “Trilogy” is the number Recorda Me, a composition from Joe Henderson that also received a Grammy nomination for best jazz solo: Joe Lovano on the album ‘The Latin Side Of Joe Henderson (Conrad Herwig featuring Joe Lovano ).
Another remarkable fact : Brian Blade is also nominated . With The Fellowship Band in the category of Best Jazz Instrumental Album of the CD Landmarks.

The nominated Fingerprints indeed has a fascinating solo by Chick Corea, but Christian McBride and Brian Blade also seize the opportunity to shine.
After Fingerprints follows another recording made in Madrid, Spain. That’s one of the songs that have given Corea fame. It is an excellent basis for often interesting solo work. The concert in Madrid is no exception, with fine support to the trio by Jorge Padro (flute) and Nino Josele (guitar).

Chick Corea ‘s wife Gayle Moran Corea joins on one number. She sings Someday My Prince Will Come. And to put it mildly : She does not have the talent of the other musicians.

But that’s the only criticism of this excellent album . Known compositions by Corea as Armando’s Rhumba or the unknown Piano Sonata : The Moon , and a few songs by Thelonious Monk . It is all of exceptional quality. “Trilogy” is a superb album . Two Grammy Awards would not be too much, on the contrary.