Written by All About Jazz| August 11, 2014| Concert Reviews, Festivals, News 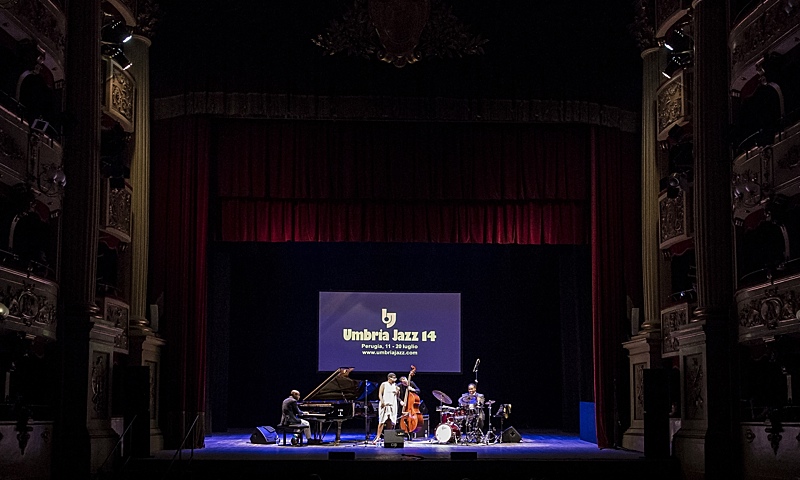 By THOMAS CONRAD | Source All About Jazz

There are many jazz festivals held in beautiful places. There are many festivals that run for 10 or more days and consistently offer first-rate programs. There are even a few that claim a history as long as 41 years. But there is nothing quite like the Umbria Jazz Festival in Perugia, Italy.

What sets Umbria apart is the atmosphere, the interaction with a particular city. Among Italy’s hundreds of hill towns, Perugia is unique. It is big enough to host a huge jazz festival, but small enough to be totally consumed by the event. Many festivals are series of concerts in cities that barely feel their presence. Umbria is a community bash. Festival posters are everywhere, even in the windows of tiny shops down steep, narrow cobblestone streets. The big stage for the free concerts is in the main town square, Piazza IV Novembre. The music goes all day and night. By 10 p.m. the main street, Corso Vannucci, is all but impassable with hordes of revelers. At the other end of Corso Vannucci is the second site for free concerts, Giardini Carducci, where there is “Non-Stop Music” for 12 hours a day. Down the hill from the Old Town is Arena Santa Giuliana, a sports stadium where the big acts play. Music happens in nine different venues holding 40 to 5000 people: old “teatros,” palazzos, restaurants, museums and wine bars. There are photography exhibitions, panel discussions, book signings and CD release events. And, in addition to street acrobats and jugglers, unofficial buskers set themselves up all along Corso Vannucci and around every corner: lonely singer/songwriters with acoustic guitars and nonets blasting Monk. Umbria is for jazz junkies and also for diehard party animals who do well without sleep. It works best for those who are both.

The 41st edition of the Umbria Jazz Festival in July 2014 began in weather that was unrecognizable for an Italian summer. Friday July 11, opening night, was a wash-out. It rained hard during the Daptone Super Soul Revue featuring Sharon Jones and the Dap-Kings. Thousands of chairs had been cleared away from the Arena Santa Giuliana floor, but almost no one felt like dancing in the cold wet wind. Only a few hundred of the faithful huddled together below the front of the stage. The ugly weather did not keep people like saxophonist Neal Sugarman and singers Charles Bradley and Starr Duncan Lowe from spilling their guts. It was after 11 when Sharon Jones & the Dap-Kings appeared. She sang like her very short hair was on fire. When she did songs like “Retreat,” about her recent battle with cancer, the raw passion of her will to live defied obstacles like rain and a small crowd.

For the second and third days also, rain killed attendance for the outdoor shows at the Arena. (They might not have drawn large crowds anyway: They were a “Techno-logical dance music festival” and Ray Gelato.) The weather also diminished the crowds for the free concerts and even the indoor events. On Sunday July 13, TV’s were set up in many outdoor cafés for the World Cup soccer final. During the second half of the match, with Germany and Argentina still tied at nil, the skies opened up. Waiters quickly covered the TV’s and carried them inside. Warren Wolf & Wolfpack played the “‘Round Midnight” show at Teatro Morlacchi that night. It was a terrific set, but not many people ventured out to see it. (By Tuesday, the weather cleared and Italy reverted to form. In the afternoons the bricks and stones of Perugia’s “Centro Storico” were bathed in golden sunlight, and the nights were balmy.)

At every Umbria festival, most of the memorable moments come from the five o’clock and “‘Round Midnight” shows in the Morlacchi. It is a gorgeous, musty, well-worn U-shaped 18th-century theater. Five tiers of opera boxes reach to the ceiling, which is covered in frescoes. The Morlacchi dominated the 2014 festival even more than in most years, because the program in Arena Santa Giuliana was the weakest in at least a decade. (Only three of the ten nights in the Arena offered jazz.)

Warren Wolf is the most talented vibraphonist to enter jazz in a generation. He may have the fastest hands to ever play the instrument. But while his single mallets were a blur, the notes, torrential as the outside rain, were clear, and contained melodies within melodies. There was a substitution for Wolf’s concert that worked out well. Gerald Clayton took the piano chair. On tunes like Bobby Hutcherson’s “Montara,” Clayton derived counterlines from Wolf’s improvisations, then reshaped them for his own continuously surprising solos. He splashed new ideas in all directions. Wolf’s Wolfpack included three of the best young players in jazz. The third was drummer Kendrick Scott, who does not keep time but generates free energy, wave upon wave. (The fourth member of the quartet, bassist Joe Sanders, is someone to watch.)

Read the full review on All About Jazz