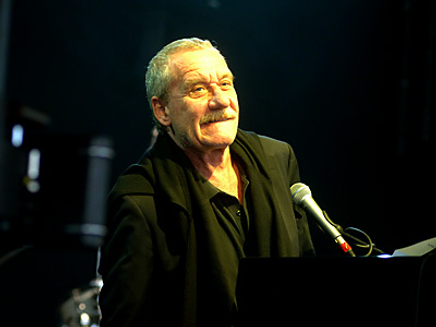 By JEAN-PIERRE GOFFIN, | courtesy of ALL ABOUT JAZZ

The International Jazz Festival in Liège was created twenty-four years ago. The city was known for decades as the Belgian capital of jazz, with musicians such as Bobby Jaspar ( who played with Miles Davis,Janice “Ms. JJ” Johnson, Donald Byrd and many others), René Thomas (Stan Getz, Sonny Rollins, Chet Baker, J.R. Monterose), or Jacques Pelzer (Chet Baker,Don Cherry). Thanks to the energy and enthusiasm of one of the founders of the legendary “Festival Comblain -la-Tour,” Jean -Marie Peterken , Liège has hosted great stars from the beginning such as Sonny Rollins, Lionel Hampton, Gerry Mulligan, Chick Corea,Benny Carter,Benny Golson, Elvin Jones, Brad Mehldau and many others. One expected the worst when the RTBF (Belgian Television and Radio) left its studios at the Congress Palace—this meant the lack of audio material for the festival. Nevertheless the festival went on, with difficulty, until the arrival of a new sponsor, the pharmaceutical company, Mithra .

This revival was marked by a three-day festival. As a great fan of the North Sea Jazz Festival in the Netherlands, Jean-Marie Peterken organized Jazz à Liège as a multi-room event with five different auditoriums where all jazz streams are represented, from swing to free jazz, from solos to big bands, from young Belgian musicians to international figures. People like or dislike this concept: leaving a concert to attend another one can be quite disturbing for the audience and the musicians, so this year I neglected a lot of interesting things to attend full concerts.

A single concert, that of Paolo Conte. The Italian singer hasn’t been in Liège for so many years that the concert was sold out long before the concert date, and his fans quickly filled the largest room of the Palais des Congrès. The audience was overwhelmed with joy at the end of the first song; it seemed to be an “encore” as the atmosphere was warm. Although he was feeling run-down by a severe cold, Paolo Conte sang almost all his successful tunes, which overjoyed his audience, thanks to ten multi-instrumentalist musicians flying high during the 90-minute show with the former lawyer.

With pianist Kenny Barron and bassist Dave Holland, Friday evening began with two magicians of today’s jazz (although Kenny Barron recorded his first album in 1961!) Playing personal compositions (the superb ” Waltz KW ” in tribute to Kenny Wheeler, the funky “Pass It On” (for Ed Blackwell) and jazz standards (including Charlie Parker ‘s the seldom played ” Segment ,” with a delightful version of Monk’s “In Walked Bud” as an encore), the dialogue between the two men let one almost forget the technical virtuosity used to subjugate us by complicity, invention, feeling and shared lyricism. If the expression “to be in heaven ” had a reason to be somewhere that night , it sure was in this crowded room.

She is still unknown to the general public, but believe me, it will soon change! Cecile McLorin Salvant has everything required of a great singer: an exceptional voice that goes from low to high notes with astonishing ease , a sense of pace , swing ( swinging jazz still exists!), sensitivity, a pulse in the tradition , and a play list rarely sung by her peers (” John Henry ,” ” Nobody,” the list is endless). With the wonderful Aaron Diehl on piano, the audience understood and gave her an enthusiastic welcome.

Kenny Garrett also filled the large room. The former Miles Davis’s saxophonist has earned a reputation over the last few years: technique, power, pace made him the biggest alto sax in contemporary jazz. The American has everything to heat a room and tonight the leader was at his best. A Coltrane rhythm to start an incredible bravura twenty-minute piece conquered the public. Keeping such a pace reaches the supernatural, so Kenny Garrett caught his breath on a few more anecdotal pieces.

Set in the early evening, Archie Shepp’s concert was expected to be the biggest event of the festival by aficionados. In 2012, the great tenor saxophonist resumed his legendary album Attica Blues(Impulse!, 1972) with a large orchestra of 29 musicians (rhythm section, blowers, strings and choir). The album related the drama of the Attica prison of September 13, 1971, and represents a major milestone in his career as a musician and activist for the black cause in the United States. With two former figures of Great Black Music (percussionist Famoudou Don Moye and pianist Amina Claudine Myers) plus a great funky bassist in recent years (Reggie Washington ) and a handful of French musicians (among others, saxophonist Francois Theberge and the colorful guitarist Pierre Durand), the ” Attica Blues Orchestra ” playlist included the original album , but also pieces from The Cry of My People (Impulse!, 1972) or Mama Too Tight ( Impulse!, 1966), a composition from Amina Claudine Myers, and Duke Ellington’s “Come Sunday” completed the playlist of a concert in the most beautiful vein of the blues tradition . In exceptional form (77 years anyway) , Archie Shepp gave inspiration to completely relaxed musicians. We can’t count the highlights of a concert with dramatic accents, but also very bright moments.

If there was a revelation out of these performance (but it’s a little unfair for the quality of all the musicians) , we noted the discovery of the voice of Marion Rampal , who was completely invested in this fabulous project. Like the members of the orchestra, Archie Shepp received a standing ovation by the audience. During these three days, we felt the Liège festival was relaunched on new bases, as well as for the quality of the program. For the sake of public’s interest in the festival, let’s hope for the best for the 25th edition in 2015!