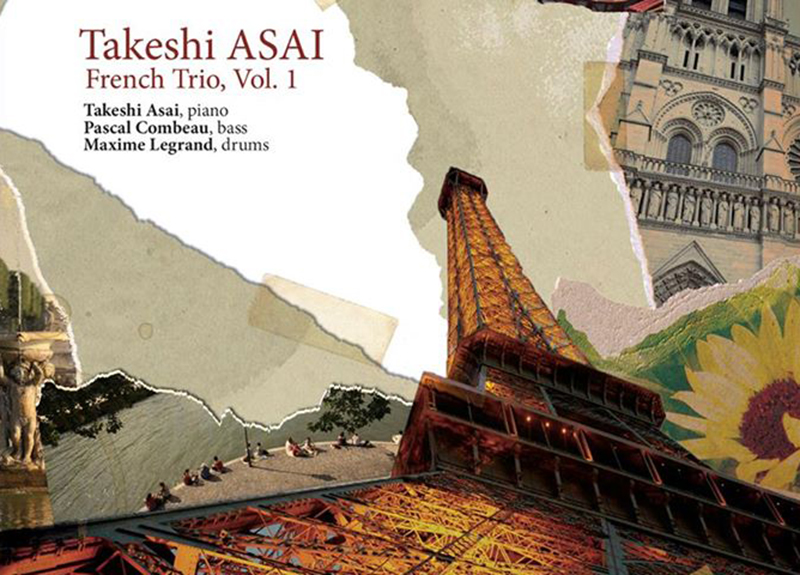 By GEANNINE REID | courtesy of  ALL ABOUT JAZZ

Spreading his time between the music scenes of Europe, Asia and the United States, composer and pianist Takeshi Asai brings a fresh sound to jazz via classical harmonic structures and movements.

Choosing to present his compositions in a trio format, Asai’s CD, Takeshi Asai New York Trio Vol. 1 focuses on the style of jazz in New York. In the summer of 2013, Asai formed his French Trio with Pascal Combeau on bass and drummer Maime Legrand and began touring the rich French jazz scene. Asai wrote music specifically for the unique sound of the trio and with the goal of using more French classical techniques to inspire the compositions and trio, and so, French Trio, Vol. 1 (De Trois Cites Records) was born. The disc contains eight original compositions by Asai that seems to meld jazz and the sounds of the late 19th and early 20th century’s French impressionism; with its use of non-traditional scales and chromaticism and unique harmonic movements.

Most of the jazz music we know and love, especially the standards, is based on ‘strong’ root movement yielding a ‘strong’ harmonic progression. If the movement from the root of one chord to the root of the next chord is down a 5th (or up a 4th), it is considered a ‘Strong Progression.’ We are all certainly familiar with the ii-7 V7 Imaj7 progression, which is all built on this strong root movement of a 5th or 4th. Asai’s compositions seem to creatively avoid this well know sound and present movements that are strong, yet not typically common. “A Midspring Night’s Dream” starts with a Debussyian solo piano intro that is full of beautiful chords which leads to Asai setting up the 6/8 pulse. Combeau’s entrance marks the A section and Asai puts the bass in a melodic role with a two note repeated motif that is interwoven with the piano figure that finally leads to the B section and the bass taking on a more of a traditional role of supportive root movements along with the addition of Legrand’s drums. The composition is based on root movements with an emphasis on 2nds and 3rds, but Asai makes the movement sound strong because of his chord qualities and the extensions of the chord combined with a strong melody that logically moves through the harmony. The trio shifts to a ¾ waltz feel for the solos, which is full of strong listening and the continued development of the original melodies. Asai’s solo style is that of developing a small fragment of a melody over time to form his solo statements. Cambeau’s solo continues the strong musical statement and leads to the recap and musical ending figure.

“Intro” seems to be an improvised solo piano piece that displays Asai’s strong sense of melody through a modal chord progression. Asai builds his improvisation with each phrase to a climax and then starts the release with a strong ending signaled by his left hand’s bass figure. Asai’s use of non-traditional scales is further exemplified in “I Remember the Castle.” This waltz uses a major scale with the addition of a sharp 5 for its melodic resource, although this is a normal scale for jazz, it is a non-traditional scale in the classical world. Jazz educator elite Barry Harris calls this scale a 6th diminished scale. Asai goes to a nice minor harmony for the B section and makes good use of a pedal tone for the C section. “Le Crepuscule,” is set to a march feel from Maxime and has melody that is based on half steps and use a Lydian modal color. Asai also uses a pedal tone to good effect, as he has in several of the selections on French Trio, Vol. 1.

Achille-Claude Debussy is considered the father of musical Impressionism (though he detested that particular label), but his influence on jazz and his relationship with its precursors are lesser known. Some believe that the genre of jazz was born around 1917 (just before Debussy’s death). In principle it is a musical language that emerged from West African dance music—with its syncopated rhythms that was combined with European popular music of the early 1900s, amongst other things. Ragtime, so-called for its ragged, syncopated rhythms, was invented by Ernest Hogan in the late 19th century and fused African dance music with the marches of John Philip Sousa. Debussy reportedly came across ragtime around 1900 and is consider one of the first classical composers to incorporate it in his music, which can be heard in his composition “Golliwog’s Cake Walk.” Debussy’s impressionistic expression had a profound influence on Django Reinhardt. Reinhardt recoded a piece called “Nuages” (“Clouds”), which is a nod to Debussy who wrote an orchestral piece of the same name with extensive use of the whole tone scale and modal harmonies to create a moody, dark atmosphere. And yet again we hear another approach to the melding of cultures in Asai’s amalgamation of impressionist sounds with the modern jazz language of today, resulting in a fine listen which is French Trio, Vol 1.