Made In New York Jazz Competition 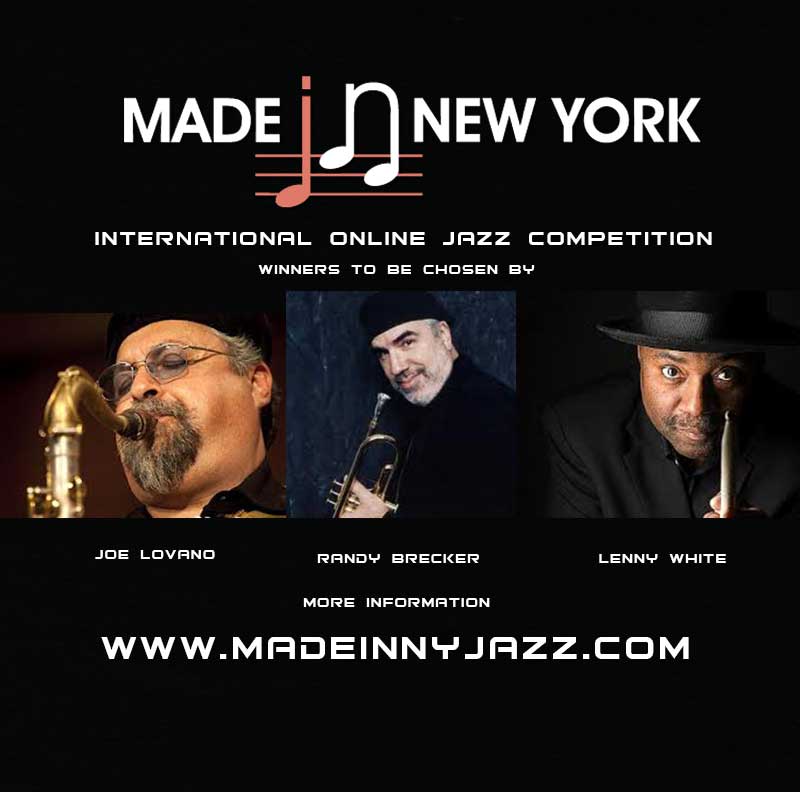 There have been many jazz contests held through the years, but the one created by the Made In New York Jazz Competition is unique. Mikhael Brovkin, the founder of the competition, explains. “There are many great international jazz talents who we may never know of because of their lack of access to the world jazz stage, but the Internet has changed all that. It wouldn’t be possible 3-4 years ago. The technology today is amazing. Social media revolutionized many industries and it is time for jazz now! ”

At this stage in the competition, there have already been entries submitted by musicians from all over the world and the judges (saxophonist Joe Lovano, trumpeter Randy Brecker and drummer Lenny White), each of whom are world famous, have joined the board of Made In New York Jazz Competition.

Since launching in January, the site has garnered more than 12, 000 registered users, more than 250 registered artists from 35 Countries!

Jazz has been an international language at least since recordings became widely available in the early 1920s. While some artists from other countries, such as Django Reinhardt, Toots Thielemans and Gato Barbieri, became famous, many others have been local legends that are unknown in the U.S. and to jazz’s media despite their world-class talent.

The Made In New York Jazz Competition aims to change that situation and level the playing field. By being conducted entirely on the Internet, artists from every country have an opportunity to participate and possibly be discovered and win. Because the Internet brings people together and makes the world a much smaller place, the contest will shatter geographical barriers. All that will matter will be the artist’s musical talents and creativity. The winner could come from small Town in Siberia, South Africa or Seattle. Everyone will have an equal chance.

First prize in the competition will be $3, 000 and it’s constantly growing because 10% of the registration fees go toward the prize. The more participants #madeinnyjazz has the bigger is the prize! In addition, the contest winner will be flown to New York City on all-expenses paid trip to be a headline performer at the Made In New York Jazz Festival in 2014.

The winner will be announced in late November 2013. October 15 is the deadline to submit the application.

Entering the competition is easy. Contestants choose a category among these seven: solo instrumental, solo vocal, small band, big band, composer, arrangement and digital. The musician submits a video through the internet that demonstrates their skills. After receiving approval from the competition committee, they pay a $75 fee per submission category. Their video appears in the category on the Internet along with detailed information provided by the contestant.

This year’s judges, saxophonist Joe Lovano, trumpeter Randy Brecker and drummer Lenny White, three major names in jazz of the past 40 years, pick the finalist in each of the seven categories. An eighth finalist is the artist who receives the most online votes from the public. Then the judges and the competition committee pick the winner who, with the opportunity to perform in New York and all of the resulting media attention, will have taken a major step forward in their musical career.

“So many talents from different corners of the world who may not speak the same language understand each other by playing jazz, ” says Yaacov Mayman, Art Director of the competition “Not everybody will succeed in this contest, but at least the competition will give everyone a chance to be discovered.”

More information about the historic Made In New York Jazz Competition and entry forms can be found at www.madeinnyjazz.com.