Buddy Bolden | The First Man Of Jazz by Don Marquis 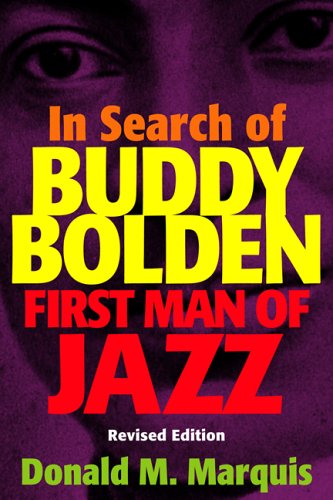 No recordings of Buddy Bolden exist. Only one photograph of him has ever been authenticated (even this stirred a debate as to whether it was back to front or not). He never played outside of his native New Orleans and his career was over by 1907 when he was institutionalised for the rest of his life

Yet Buddy Bolden is pretty much regarded as the first person to ever play jazz. Certain legends sprang up about his life when people began to seriously research his life (about 30 years after he stopped playing). Stories abounded about how he was the editor of a scandal newspaper, ran a barbershop and played his cornet so loud that he eventually blew his brains out. It is in this book that Marquis attempts to sort out the fact from the fiction and he succeeds superbly well.

Quite simply I could not put this book down. You would think that the amount of primary sources available to the author would be scant and could not possibly warrant a full biography on such a vague character as Bolden. Yet by digging up birth, marriage and death certificates, police records, old city maps, personal letters and newspaper stories from the time, Marquis has managed to piece together a full and fascinating story. His research was carried out in the 1970’s so he also had access to some of the people who were first-hand witnesses to the goings-on in New Orleans at the turn of the century (the book was first published in 1978). This revised edition provides an additional epilogue from 2005 and gives an insight into how the author located some descendants of Bolden and organised a fitting memorial for him in New Orleans. It also lays to rest the myth of the missing recording that he supposedly made in 1897. If it did exist it has surely been destroyed. How the first man of jazz sounded will remain to be resolved only by our imagination.  And perhaps it should.