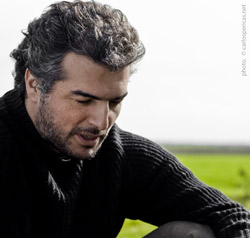 Venezuelan Leo Blanco is a genuine piano master. Rooted in his homeland’s Africa-Latina rhythms and enriched by a deep knowledge of jazz, his music is soulful, rhapsodic and utterly enthralling.

Leo Blanco is a genuine virtuoso with a huge musical personality. A superbly soulful improviser, he has recorded with Dave Liebman, Lionel Loueke, Donny McCaslin, Luciana Souza, and Antonio Sanchez and composed for the Scottish National Jazz Orchestra, his own string quartet and maverick horn team Brass Jaw. His solo concerts are enthralling, rhapsodic displays of the technical command and emotional communication that have won Blanco five-star reviews from The Scotsman and The Herald, drawn standing ovations at Aberdeen Jazz Festival and earned a coveted Bank of Scotland Herald Angel award for outstanding performances at Edinburgh Festival.

Doors open at 7:30pm, music starts at 8pm
Use your Loyalty Card at this concert – attend 5 concerts and attend a 6th concert for FREE!
Pre-concert dining available – click here to book a table or ring 020 7387 5959
The Forge can accept only cash on the door

Born in Mérida in the Andean region of Venezuela, Leo Blanco grew up surrounded by Venezuelan folklore, jazz, classical music and pop. He studied violin and piano from an early age and joined the Mérida Youth Symphony Orchestra aged eleven. After moving to the capital, Caracas, at the age of sixteen, he led his own jazz trio while studying at the musical institute Ars Nova and the University of Musical Studies and gained experience as a music producer, as well as composing and arranging, and shared the stage with Pat Metheny, Terence Blanchard, Danilo Perez and Gonzalo Rubalcaba at the city’s oldest and most prestigious jazz venue, Juan Sebastian Bar.

In 1996, his interest in world music and jazz brought him to Boston, Massachusetts, where he immediately obtained a full scholarship to study composition and improvisation first at Berklee School of Music and then New England Conservatory. His talent and dedication to music was very quickly recognized in the US and he became the first Latin American to win the prestigious Jazz Boston Jazz Society Award. The same year, 1996, he received the Billboard Grant Award for his talent, commitment and achievement.

Throughout his time in Boston, where he is now professor of piano at Berklee, Blanco has continued to be very active in the city’s multi-cultural music scene. He has added his creativity and natural musical talents to Afro Latin, classical and North American folk music projects and played with highly acclaimed artists such as Dave Liebman, George Garzone, Luciana Souza, Bob Moses, Dave Samuels, Jamey Haddad, Antonio Sanchez, Giovanni Hidalgo, and Jane Bunnett.

In 2008 Blanco was commissioned to write The End of Amazonia as part of the Scottish National Jazz Orchestra’s celebration of South American music. His recordings to date include Roots and Effect (2004), which features saxophonist Dave Liebman, Grammy winning singer Luciana Souza and vibraphonist Dave Samuels among the international cast in his World Jazz Ensemble, and Africa Latina (2009), which he recorded with saxophonist Donny McCaslin, drummer Antonio Sánchez and guitarist Lionel Louke, among others.

His most recent recording is the solo piano album Pianoforte, which was recorded live in concert in his home town, Mérida, and during which Blanco demonstrated his unflappability and quick thinking imagination by improvising inspired chords to the not entirely unexpected but slightly intrusive sound of the nearby clock tower’s bells striking the hour.