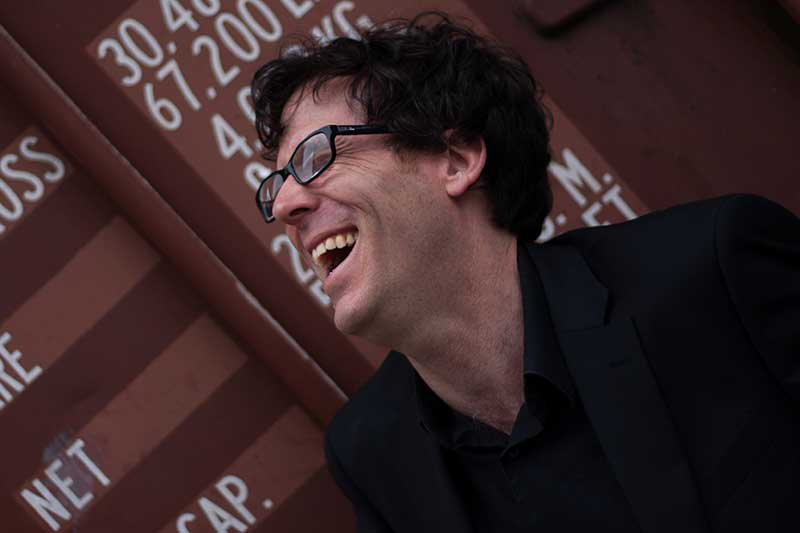 Louis Durra, the Californian pianist who became an overnight success on American Public Radio in 2012 after working as a professional musician for thirty years, mostly as an accompanist, has moved his base from Los Angeles to Berlin.

Durra fell in love with the German city during a stop-over in August 2012 on his way back to California from Edinburgh, where he had enjoyed a second successful run at the popular Jazz Bar round-the-clock night spot during the Scottish capital’s famous Fringe festival.

Earlier in the year, Durra’s The Best of All Possible Worlds album, had taken him into the upper reaches of the American college charts when his very individual piano trio versions songs by Bob Dylan, Bob Marley, Alanis Morisette and Radiohead took a trick with deejays and listeners alike. The follow-up, Rocket Science, released last summer, created similar waves with its covers of the Beatles, White Stripes, KT Tunstall and traditional Mexican and French Canadian songs.

The idea of playing pop and folk songs in a jazz piano trio may be commonplace these days, but Durra takes it further than most, even finding jazz trio repertoire and inspiration in Scottish electronica band Boards of Canada. It all stemmed from Durra taking a residency in a Los Angeles restaurant. With long hours to fill, he needed a large repertoire and much as he loves the Great American Songbook and can compose high quality music himself, he was aware that his audience might not have the same hunger for discovery that had taken Durra, at thirteen, into jazz through hearing one of John Coltrane’s more adventurous recordings.

An inveterate radio listener going back to pre-school days – a trait that makes his music being played across the US on hundreds of stations all the sweeter – he started turning the dial to as many jazz programmes as he could find.

Meanwhile, the classical piano lessons that he’d started a year or so earlier began to suffer at the hands, and fingers, of great jazz pianists such as McCoy Tyner and Bill Evans as Durra tried to emulate his new heroes. He was still in his teens when he got the opportunity that led to him becoming a professional musician, working in a theatre production. One job led to another and another and he became a pianist for hire, learning lessons along the way that have impacted on his own music.

“I got a huge amount out of working in theatre,” he says. “There’s music there that can convey a mood, move the narrative forward or set a scene or a time period. Then there’s timing: dramatic timing, comedic timing, audience timing, letting them respond to the action, even someone-walking-across-the-stage timing. And I’ve taken all of that into my own style in some way.”

After years of playing an accompanying role and having made a couple of jazz albums that didn’t go anywhere, Durra was given the chance to develop a more personal repertoire in a three-nights-a-week residency for a trio in a bar-restaurant in Los Angeles. Shortly before this, he’d lost interest in everything he’d been doing musically. He wanted to connect with the public and the best way to do this, he thought, was to play recent pop music, give the customers tunes they knew, but make it expressive and artistic. With four to five hours a night to fill and determined that he, his musicians and the bar staff alike wouldn’t get bored with the same songs being played on rotation, he worked up a repertoire of some two hundred items, ranging from jazz standards to songs by the Ting Tings, Radiohead and songwriter-rapper Ke$ha.

He calls the residency his “Hamburg basement” after the Beatles’ experience of honing their music in the clubs on the Reeperbahn, and the first sign that his approach was working came when the proprietor upped the residency to four nights a week. The trio then recorded some of their “oddball pop covers”, The Best of all Possible Worlds, which Durra gave to a publicist. Within two weeks it was receiving prominent play on American college radio and it went on to reach the top five on the playlists.

“I’m not on a ‘say no to mainstream jazz’ soapbox,” he says. “I’m just as likely to play music by Cedar Walton, Hank Jones, Joe Henderson, Annie Ross or Brad Mehldau as, say, Snoop Dog. I just enjoy having a broad palette of harmonic settings and forms and sure, a jazz piano trio playing Blow by Ke$ha is wrong on so many levels. But sometimes I like to see the virtue in junk music. Jazz was once described as the sound of surprise and that’s my aim, to make each piece have something unexpected about it, in the nicest possible way.”

The irony of moving from his “Hamburg basement” to Berlin isn’t lost on Durra.

“You should be careful what you wish for,” he says. “I was struck, just in the short time I spent there, by the open-mindedness of the Berlin scene. It seemed like a very stimulating environment and almost before I left, or certainly as soon as I got back to LA, I was thinking about how I could affect the move. It means I’m much handier for the UK, where I’m going to be working with the singer Sophie Bancroft and her husband, bassist Tom Lyne. I also have a solo piano gig coming up at Pizza Express in Soho in London on June 23 and I’m hoping to get a bit better known in Britain, rather than just be the guy who played on the Fringe in Edinburgh. But I’m also finding life really interesting in a new city with a – for me – new language and I’m enjoying exploring and trying new things.”