The History of Jazz | Ted Gioia 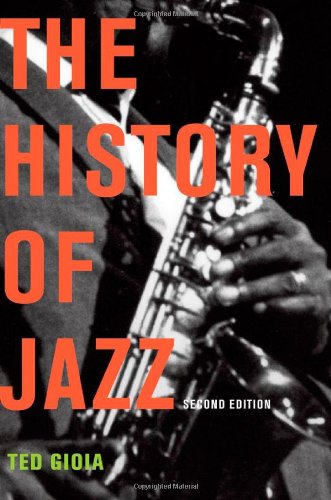 Anyone purportedly writing a “History of Jazz” faces a daunting task: A complex history of interwoven musical strands, the linkages and evolutions (sometimes skipping a generation), the geographic spread to Europe and elsewhere, the eventual fragmentation of jazz into diverse sounds and approaches, and the opinions of knowledgeable, rabid fans.

Ted Gioia succeeds magnificently: This is the best single-volume history of jazz I’ve seen. While not without some minor flaws (see below), this is a comprehensive, generally very well written, and intriguing story of the genesis and development of jazz. It is a compelling story, and Gioia writes without mythologizing jazz, or constantly needing to remind us that this is, indeed, art. The giants of jazz– Armstrong, Ellington, Parker, Holiday, etc. are critiqued rather than lionized.

Giola proceeds through the now familiar African, American, African-American, and European roots of jazz that emanated first from New Orleans. He traces its developmental routes through Chicago and New York, the Armstrong solo evolution, and the diverse “territory bands” such as those of Bennie Moten and Count Basie.

Fortunately, Gioia does not limit himself to a strictly chronological narrative. He interrupts the timeline with revealing excursions into topics such as the development of instrumental styles (e.g., piano, trumpet), and jumps ahead to show the impact of early influences on later styles (e.g., Lester Young and bebop). He also pays attention to cultural, technological, and economic context, without letting these subtexts blare over the music. Giola knows music from the “inside” as well as the outside, and his discussions of jazz technique and harmonic and rhythmic innovations are detailed and precise. His deconstruction of various solos and styles is illuminating: Charlie Parker’s “Indiana” is a version “where almost every bar features one or more altered tones-an augmented fifth, a major seventh played against a minor chord, a flatted ninth leading to a sharpened ninth…a textbook example of how bop harmonic thinking revolutionized the flow of the melodic line in jazz.” Yet Gioia is also astute in directing our attention to the “core of simplicity” …the “monophonic melody statements” in bop.

Gioia’s critiques of various musicians are generally fair and accurate, and he discusses the famous as well as the overlooked. Every jazz fan, however, will probably find some favorite musician given insufficient coverage, or will disagree with a Giola critique. There’s no mention of Carmen McCrae, about half a page on Sarah Vaughan, very little mention of European jazz, not much discussion of Miles Davis’ or Basie’s later work (“The Atomic Mr. Basie,” for example). For my tastes, there is not enough on Mingus’ sidemen (other than Eric Dolphy and Rahsaan Roland Kirk) and he describes the Mingus Town Hall Concert as a fiasco. (Organizationally it was a disaster, but musically it succeeded.) Giola’s statement that “Mingus was the closest jazz has come to having its own Ezra Pound,” is baffling. To a large degree, however, these are editorial (the book is only 395 pages long), as well as critical decisions. Not everyone would agree, as I do, with Giola’s dismissive statement that Kenny G. “sold over $20 million of emaciated pseudo-jazz to a devoted audience. A critic cannot and should not please everyone.

Gioia commands our respect because of his thorough knowledge of jazz and its web-like variations and influences. He knows his material well, whether it’s the origins of jazz or the “Third Stream” and “Free Jazz” movements of relatively recent years. I recommend this book very highly to both musician and non-musician alike, jazz aficionado and novice. You may read the book as an introduction to jazz, or to achieve a greater synthesis of what you already know. It may also serve as a springboard to more narrowly focused jazz writing, such as Rosenthal’s “Hard Bop” or Lees’ “Meet Me at Jim and Andy’s.” There is a general index, an index of songs and albums, 15 pages on recommended listening, eight black and white photos, some notes on sources, as well as suggestions for further reading. This book, and perhaps a copy of the “Penguin Guide to Jazz,” could easily serve as the core of a jazz lover’s bookshelf.