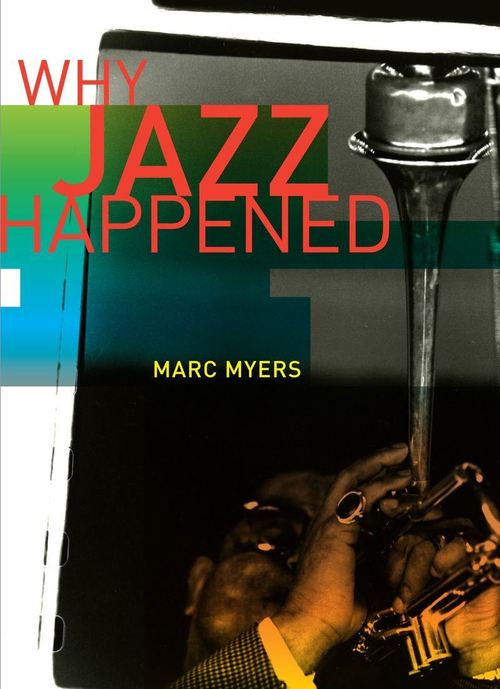 Why Jazz Happened is not your typical history of jazz. You won’t get long biographies of Coltrane, Davis, and Monk. You won’t get in-depth analyses of great songs, albums, or soloists. What you will get is the story of how cultural, social, and historical variables all helped to create jazz

Coltrane’s extended solos, after all, are as much a product of the civil rights struggle and invention of the long play (LP) record as they were about Coltrane’s upbringing and his legendary quartet. Bebop owes as much to the musician’s union’s strike (barring members from recording for two years in order to petition for royalties for recorded music) as it does to the pioneering vision of artists like Dizzy Gillespie.

So, Why Jazz Happened is a history of jazz, yes; but it is as much a history about American culture told through the story of jazz. West Coast jazz (a favorite of mine), for instance, is largely ‘explained’ (though Marc Myers is no reductionist) by the housing boom in post-WWII West Coast and the fact that many touring musicians decided to settle there, developing a laid back sound to match the laid back weather and atmosphere. Spiritual jazz (from Coltrane’s “A Love Supreme” to Rollins’s “Freedom Suite”) is argued to be largely an outgrowth of black musicians’ disappointment with legal and cultural segregation, and the lack of progress toward equality; many black artists increasingly wrote spiritual-influenced jazz expressing their anger at the present and hope toward the future. Soul jazz (from Lou Donaldson to Grant Green) is seen as jazz musicians’ and record labels’ attempts to get R&B record buyers to come back and buy jazz records. I hope I am not making Myers’s explanations sound too simplistic; his story makes use of an impressive array of primary and secondary sources including interviews with the musicians (and ‘behind the secenes’ folks like record executives) working at the times in question.

If I have one complaint, it is that the book goes off in many different directions, sometimes, feeling a bit long winded. The chapter on West Coast jazz, for instance, gokes on for 20 or so pages on the ins and outs of Los Angeles’s post-WWII booming housing market and the urban planning involved in dealing with the sprawl. Sections like these (another is an in-depth story of the creation of the LP record) are interesting for 10 or so pages, but the reader can get a bit bogged down in these details. (I suspect that during these times, most readers will be saying “let’s get to the jazz part.” I know I was.)

But all in all, I kept reading. The book was very interesting, particularly because it was both about jazz and the cultural surroundings that advertently and inadvertently shaped it. I know I will never listen to some of my favorites the same way again. Now, these favorites will come a bit more to life. And I think that is a good thing.