Interview | Eric Ineke: “I want the swing to be alive” 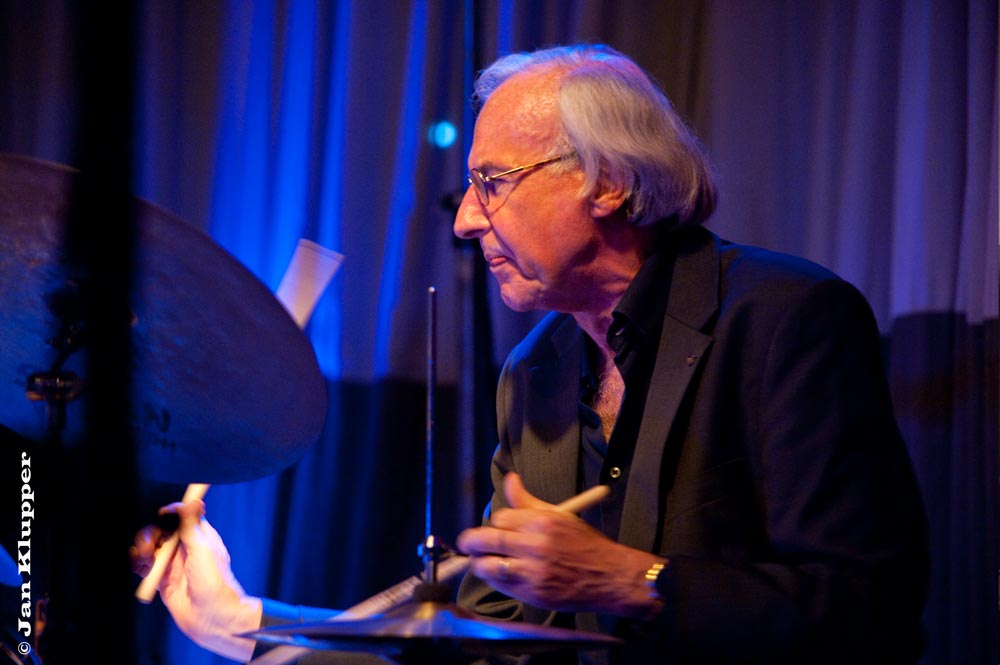 Eric Ineke is one of the most accomplished drummers in the European jazz scene. Eric Ineke has been working as a professional musician for more than fifty years. His talent and incessant dedication led him to play with historical figures, an endless list of names, that he put together in an indispensable book for jazz lovers: The ultimate sideman (Pincio Uitgeverij, 2012). This book offers an essential chronological trip through Ineke’s memories in a conversation with one of his closest friends, saxophonist Dave Liebman.

Eric Ineke’s musical life could not be understood without including his work as professor at the Royal Conservatory of The Hague, where he shares with his students the significance of more than five decades of swing.

This charismatic drummer discovered jazz when he was just a child through the radio and a friend of his mother who had jazz records that he could listen to. That was when he fell in love with music. First, he began beating ryhthms on his legs and finally he found his way behind a drumkit.

Marta Ramón: You are a great musician but you are also well-known as a music educator. What role has teaching played in your carrier?

Eric Ineke: Yes, I like both very much. Teaching also enriches my playing. I have learned a lot since I began teaching many years ago. I think that I becamea better musician through teaching. So that’s why I love to do both. I am lucky because I learnt a lot from the masters I played with like Dexter Gordon, Johnny Griffin, George Coleman, and so on. I learnt a lot from all of them, like being there from the first note. It is serious business from the first note, and that’s what I learnt fromthese people and that’s what I want teach to my students.

MR: What do you think it is the most evident change in jazz since you started your career?

EI:I feel like a lot of things have moved away from the tradition. Sometimes it is like there is no swing anymore. In European jazz there are good things, absolutely, but there are many other aspects of the tradition have been lost. I want swing to be alive; swing and blues are the hard beat of jazz. That’s the sauce of the music, and we are moving away from it. I miss the deep down swing feeling, the groove! And I am afraid that it is getting less and less. Because of that I always explain to my students the importance of the tradition. If the foundation it is not there it is like the music is just hanging in the air.

MR: So, what do you think about Free-Jazz?

EI: Free jazz as an extension, if it happens spontaneously in the music for me is ok, it is a part of it and then you can go back. The problem is that a lot of musicians play nothing when playing Free-jazz, they can’t even play a blues!But when free jazz comes out of something it is ok, as long as we can go back and start playing the groove again.

MR: Canswingbeen taught in a Conservatory or must onelive it?

EI: Yeah! [laughs] That’s a famous question! It is about life. There are some talented people that have the feeling and they are easy to teach but others, including good professionals, can play a nice rhythm but their sound it is not really groovy so you have to help them. Sometimes the feeling is there, but generally not. It is absolutely a natural feeling.Sometimes you feel it is there but you need to help them to realise it, to extract it.But these are only a few.When you learn it, there is not the underlying feeling, it sounds too academic and far from the swing.

MR: When you were young you got in touch with jazz just through the radio and few records, butnowadays there is huge on-line access to music for the students.Do you think that it could be misleading them?

EI: Yes, that’s true. There is too much. I need to help my students, to advise them what they should listen to: tell them again again and again, what music they need to listen to.

MR: What do you feel it is the main difference between when you started your professional career and the situation nowadays?

EI: The economical part of the business has changed a lot. The business is an important part, there are a lot of young musicians that graduate fromthe conservatories and they need work but there is not enough work. And that’s a pity. Just the real good ones and the ones with the right attitude of not giving up, can do it.But there are also people with great talentwho are not as strong or determined that don’t achieve their goal: to achieve your goal, you need to work really hard.

MR: Do you remember the first time you went to New York?

EI: Of course! I remember it perfectly! [Smiles] I went to New York when I was 19 years old. At the time, American students who were studying in Europe went back home for the summer break, so they needed music during the boat trip. I received the opportunity to be in a Dixieland band and made the trip. Normally it is a ten day trip on the boat, then you stayed one night in New York and you went back. But I had the opportunity to skip a trip and I stayed in New York two and a half weeks! It was 1966 and I saw all the great musicians, all my heros! The first night, I remember it perfectly, it was Monday 25th July. I went to the Five Spot and on the sign in front of the door I read: Tonight Elvin Jones Quartet, with Paul Chambers, McCoy Tyner and Frank Foster. It was fantastic! I was just sitting in front of Elvin Jones with a beer! [Laughs]

MR: And what about your friend Dave Liebman? What was the first time you happen to meet with him?

EI: I remember playing with Dexter Gordon at the Pescara Jazz Festival. Onthe same night we opened the jam session and there was nobody there and then the Miles Davis’ band came in. It was Al Foster and Dave Liebman, Miles Davis stayed at the hotel, but the other guys wanted to play! I was sitting thee with all these guys!And Dave asked ‘can I go in?’ and that was the first time I played with him! It was really nice for me. But it wasn’t until 1994 that we met again and we started a long friendship!