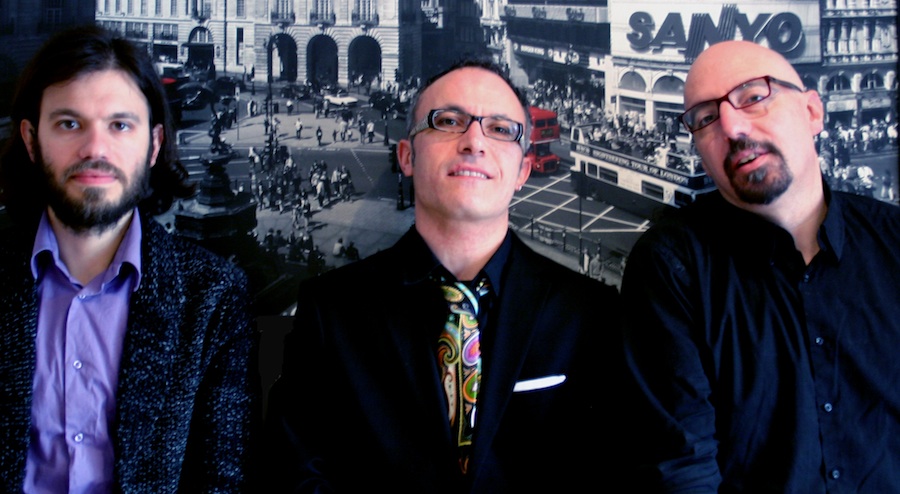 Every so often the fates contrive to bring together musicians of incredible talent, put them in the hands of a good recording engineer, give them a good producer and the result is an album which is very special. Nordik is the result of such a series of events.

Marco Marconi is a pianist who studied classical piano and then jazz at the Music Conservatory of Perugia. He has played throughout Italy and Europe, including the Cheltenham Jazz Festival and the Lancaster Music Festival. He has been resident in London since 2012. On ‘Nordik’ – the first CD release by this phenomenal pianist he is joined Enzo Zirillia on drums and Andrea di Biase on bass. Both come with strong credentials. Enzo Zirilli has played has played at The Vortex in London and hosted at Ronnie Scott’s. His influences range from Charlie Christian, Wes Montgomery, 60s be-bop and hard-bop, contemporary funk and bossa nova. He has worked around the world with great musicians including Enrico Pieranunzi, Gloria Gaynor and Tom Harrell. He is highly respected and has been called ‘an incredible musician’ by legendary Isreali sax man Gilad Atzmon. Andrea di Biase studied classical double bass at the conservatory of Milan before graduating with distinction from the Guildhall School of Music in London where he studied with Scott Colley, Drew Gress, John Taylor and Rufus Reid. He has played with Stan Sultzman, Norma Winstone, Pete Saberton and Asaf Sirkis amongst others. Together with pianist Liam Noble, Andrea plays in the new trio of the trumpet player and composer Kenny Wheeler and has played major festivals such the London Jazz Festival and The Hague Jazz Festival. He leads the Oltremare Quartet with pianist Antonio Zambrini, saxophone player Mike Chillingworth and drummer Jon Scott.

‘Too High Don’t Fry’ kick starts this CD and from the start it is clear this is something different, a new take on the trio of piano, bass and drums. The swingy, mesmeric theme is relished by the piano, underpinned by bass and drums and develops into a rippling, writhing beast of a number with dare-devil bursts of speed set off by short, sharp chords. The drum solo from Enzo Zirilli is effective and very engaging and tops the number cleverly until the theme is re-introduced by piano and bass. It is not until the second or third listen that you realise how complex the piano part is in the second half of the number, and how astonishingly rapid the finger movements are.

‘Nordik’ is slower and the piano dominates but not in a brash way. The theme is structured and weaves in an out around some great improvising sections where the piano, especially in the mid section, leads but the other instruments willingly follow providing key support to Marconi’s riffling, fast fingered notations. There is a gorgeous piano and percussion interlude with the piano playing short little riffs and open chords and the drum supporting before the theme is picked up again by the whole group. Again, the fast fingered work of Marconi defies possibilities.

Thelonius Monks’ ‘I Mean You’ is given a jazzy, up beat treatment here and the sound is far more open than the original recordings by Monk and his compatriots. The trio interpret Monk’s tune with respect and the piano playing at times is such you might suspect Monk’s spirit is in the room – yet it is also very distinctively not Monk. What Marconi does here is take a great tune and make it his own, ably supported by the rest of the trio with a great bass and drum interruption before the theme is handed back to the piano. Not Monk but definitely of Monk. ‘UK Journey’ is slow, moody and just builds and builds into a tune which pulls at the heart. The middle section is heavier, full of emphasis and emotion. ‘Blizzard’ is a fast, joyful number and again has a strong theme established quickly around which the trio develop, exchange and offer a musical discussion. It is followed by a very unique interpretation of Paul Desmond’s ‘Take Five’ but this is not like any ‘Take Five’ you may have heard before such as from the Dave Brubeck quartet, for who Desmond Wrote the number. This is an original take, starting with the rhythm beaten out on piano before it develops into the familiar tune. Marconi makes the most of the piano lines, tweaking, developing and interpreting them almost as his own. A fast, hurtling, eye-popping rendition of this standard delivered at mind-boggling speed.

‘Photos in Regent’s Park’ follows, taking the mood down a little, offering a gentle stroll, evocative of leafy lanes and green fields. Andrea di Biase gives an atmospheric bass solo, backed by Zirilli’s brushes on percussion and the piano backs them before repossessing the theme. ‘Sunside’ is another gentle number which rolls and ripples back and forth, creating an air of calm before Ellington’s ‘ I Got It Bad’ is given a sultry, soothing twist by the trio. Forget the many versions of this number, especially that of Newport ’56 (with Johnny Hodges on alto sax), this is an original take and with this number there is little of the development so prevalent in the original which leaves the listener wishing for more. ‘Pecan Girl’ is a delight and here the piano runs away with the tune, only just reined in by the bass and drums, creating a gorgeous to-ing and fro-ing between the instruments. A great tune, running up, down and almost sideways with the rhythm and drive never leaving the structure. Opportunities arise for solo work form both drums and bass which are taken gleefully. This is a feel good number.

‘Better With You’ is beautiful and Marconi’s playing comes into its own with expressive, gentle playing, creating a relaxing and peaceful mood, which both bass and drums pick up and treat the theme with respect, care and a delicacy which is almost palpable. The restrain is tangible.

That restraint is unleashed in a phenomenal, stonking rendition of Scott Joplin’s ‘Maple Leaf Rag’ played at breakneck speed, almost to the point where is the notes could, if not controlled by a real master of the keys, slide into each other, but they never do due to the dexterity of Marconi’s fingers. This is a great interpretation of Joplin’s compositions and one which would you sense Joplin would approve of. Marconi storms it.

This CD is one of those happy events where 3 incredible musicians come together led by an arranger and composer with true insight and incredibly fast fingers. The music is clear, note perfect and both Marconi’s own compositions (all tracks apart from 3,6,9, and 12) and his interpretation of other composers’ music is intuitive, mindful and above all, great to listen to.

This debut CD was recorded at the famous Fazioli Concert Hall in Venice, Italy. The executive producer, Paul Jolly, of the label 33Jazz said of the CD, ‘this album is destined to become one of the label’s landmark recordings’. There is a sense he is not wrong.