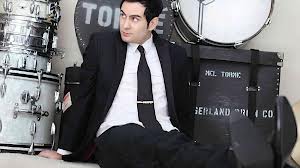 The Rio Café in Partick, an area of Glasgow, would, on first sight, seem an unlikely venue for an international recording artist based in Los Angeles to make his Scottish debut, but what a debut it was. The Rio transformed from a 1950’s style daytime diner to an honest-to-goodness legitimate Jazz venue on Wednesday evening.

James Tormé had announced a low-key pop-up gig to celebrate his birthday. No fancy advertising,  just a name on the chalkboard in The Rio “Wednesday Jazz – James Tormé”. Along with a few well-placed mentions on the social media sites which generated interest among fans to ensure a packed room in a corner café in Partick. The buzz among the local community had been palpable in the lead up to the performance. One local exclaimed “who would have thought we’d ever have a star of the calibre of James Tormé performing in our town?”

Well perform, he did. The locals who knew their music arrived early to claim the best seats in the house for this free gig. Fans from across Scotland arrived to find the star setting up for the performance and carrying out a soundcheck with a trio of young talented performers who were to provide the backing for the evening. The superb young players provided much more than backing, they were an integral part of the show and their musicianship was outstanding.

The room was crowded by 9pm when the trio struck up the overture to the evening, with James taking to the tiny stage to rapturous applause. We were in for a treat, From This Moment On… Cole Porter’s timeless classic got the evening off to a rousing start. Delivered with assured aplomb by James and the trio.

David Mann’s No Moon At All followed before James gave some background to his “Tormé meets the British” tour, providing insight into his journey to introduce himself and his music to a wider audience. Ray Charles’ Drown in my own Tears followed before the star explained a rather tenuous link between the great Mr. Charles and his Scottish audience. Reference was made to the first singing Tormé, dad Mel, visiting the UK many years before during which, Tormé senior proposed to the future Mrs T, James’s mum, the British actress Janette Scott. This led into Too Close For Comfort to emphasize the reverse psychology employed by dad, class! A Better Day Will Come was next up, the song Tormé won the John Lennon Award for, was reminiscent of the Great American Songbook that was prevalent in the days prior to the Great British Invasion of the USA, which also heralded the ‘completion of the destruction of jazz’, according to some. Nat King Cole’s What Is There To Say was discovered by Tormé during a late-night YouTube session (or “binge” as he called it). Even great jazz singers seek inspiration using technology.

James referenced his own heritage, being “quarter Scottish”, as all LA residents do, whether it’s true or not, and reflected on his father’s 1956 stay at The Grand Central Hotel in Glasgow while promoting his number one record Mountain Greenery, which was then performed at breakneck speed. Love For Sale, the title track of James’ current album made an effortlessly brilliant end to the first set, with a promise of much more to come.

James delivered a perfect rendition of Michael Jackson’s I Can’t Help It to get the second set off to a great start. Having paid tribute to the late star by including Rock With You on his album. Almost Like Being In Love by Loewe and Lerner, made popular by its inclusion in Brigadoon, led into more Ray Charles with In The Heat Of The Night. This was an inspirational set. Dat Dere, a jazz song with music by Bobby Timmons and lyrics by Oscar Brown, Jr., was delivered with assured expertise by Mr Tormé. Another Nat King Cole song, When Sunny Gets Blue included a sublime interlude from Peter Henderson on keyboard. This led into a perfect rendition of London legend Earl Okin’s My Room.

The atmosphere in the room was akin to a real old jazz club. Everyone was captivated by the music and performance of the small group on the tiny stage in the corner. Respectfully listening and watching a truly professional performance. I have rarely spent a better musical evening, and here I was in a small corner café in Partick. Music knows no boundaries. The locals lapped it up. A Hollywood star in their town, it was crazy.

Duke Ellington’s It Don’t Mean A Thing (If It Ain’t Got That Swing) included solos from all of the talented trio who were putting their all into this show. They knew they were in the company of true talent, not least their own.
The set grew to a close with a perfect medley rendition of Comin’ Home Baby and Mary Ann. The Rio went wild. A standing ovation was assured, they were dancing in the tiny café that would be serving breakfasts and shakes in the morning. What a transformation.

What a night. If you get a chance to see James Tormé you should beg, borrow, even steal a ticket, it’ll be well worth the effort to be in the presence of such an outstanding showman and performer.

More Information about James Tormé can be found at :  www.jamestorme.com