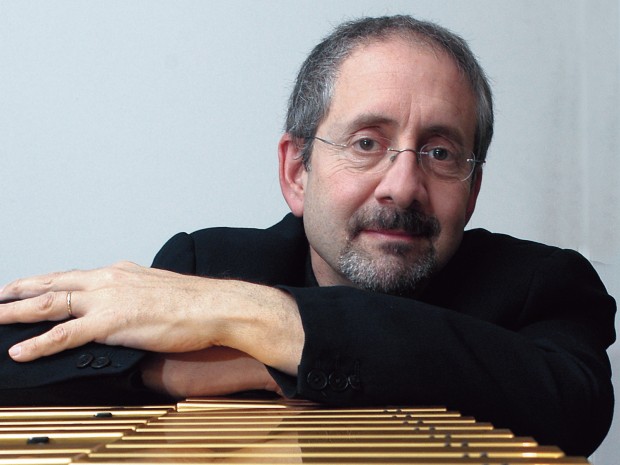 Only a few names are at the front line of the jazz scene with the vibraphone nowadays, and Dave Samuels is one of them. This American musician has developed his an own charismatic sound with both the vibraphone and the marimba.
For more than a decade, Samuels has been translating the jazz language to warm Latin rhythms with one of his most successful groups, The Caribbean Jazz Project. But this versatile vibraphonist has worked also with many different personalities from what is known as/what might be referred to as the ‘traditional’ jazz stream like Gerry Mulligan, Oscar Peterson or Chet Baker, and with big musicians of the contemporary jazz scene, like Pat Metheny.

His precise playing is the reflection of his clear thoughts. The intelligence, creativity and good sense of humor and irony of this musician and educator is the trinity which has kept him active over the years. Dave Samuels enjoyed a small tour in Europe during which he visited the Jimmy Glass Jazz Bar (Valencia, Spain) to play with the great bassist Matt Baker and the Spanish flautist Jorge Pardo, who has been named the Best European Jazz Musician by the French Jazz Academy.

At last you are getting ready to record a new Caribbean Jazz Project album.

Yes, we are recording a new CD. It’s gonna come out in a few months with a new instrumentation and new members: Oscar Feldiem on sax, Vince Cherico on drums, Arturo Stable on percussion, Lincoln Goines on bass and myself on vibraphone and marimba. It is a small band with five people, we are presenting new music in a wide sense.

Are you using again a sax voice, like at the beginning of the project when you played with Paquito D’Rivera?

Yes, we haven’t had a sax since Paquito D’Rivera. We had flute, trumpet… It’s always a combination of the instrument and how the musician plays the instrument. We need both elements. So if we have a saxophone it is not because it is a fantastic instrument, it is because someone’s voice will really combine with all the elements that are going on. Because we speak a certain language and, I mean, you could ask me why everybody in the band is speaking English and I can give you an answer, but it is a question that doesn’t make any difference. It is because of the contact of what we say, and how we say it. That is what makes, for me, one person different from another.

So it is all about the interaction?

Yes, the interaction is really important, and the vocabulary that each member brings to the group to express himself.

Does that connection come from your touring?

Yes, that is very important. We have played together quite a lot and, also, we have toured together. The last big tour was in Japan, it was a very amazing musical experience.

What can you tell us about the tunes? Are they all your own compositions?

We haven’t finished the recording so I can’t say yet if they are all original compositions or a combination of originals and of tunes that someone else wrote and changing them.

Are you going to make a version of jazz standards?

No, no, no… You know, standard is a very big, general term. I prefer to talk about music that was composed by someone that is in the band, or is not in the band. But the most important thing is how it sounds, and what makes people want to hear them.

Do you know already the name of the album?

No, we don’t. But you can say that the next time someone goes to the store they should see if there is a new recording by the Caribbean Jazz Project.

This is the last gig of your short tour in Europe. How were these days here?

Great. I was in London playing with a group of Italian musicians that invited me to play with them. Then I came to Spain and I have played with Jorge Pardo’s group for few nights in different cities, like Madrid or Alicante, and today is the time of Valencia.

You are also well-known because of your teaching career in Berklee. How does Dave Samuels approach the idea of education?

It is really about sharing your experiences. I try to give something to think about. I think it is very important. Someone has the ability to play an instrument, and to learn how to write music but most people don’t allow themselves to try to impress with their sound. To try something to realize that they have an ability to explore, and there is not a lot of people who are walking around exploring things because they think they gonna fail. It is even to make music, or to paint… they are always judging if something is good or bad, and I think it is a mistake, a wrong attitude.

Maybe the reason behind that outlook is that the instruments that you play, marimba and vibraphone, are unusual, so you have always been opening closed doors.

Yes, maybe. They are popular instruments, but not usual. That is because music that we play is about how to improvise and somehow it feels like a new way to listen to music, and you can automatically connect with people. And that keeps me alive, to be creative, and looking hoping to play a lot with my band. You know? My future is right now.

More information regarding Dave Samules and the Caribbean Jazz Project at www.dsamuels.com