Collette Cooper takes a look at the Darkside Of Christmas.

At this time of the year our mailbox tends to be overloaded with news of the latest Christmas release complete with tacky artwork and yet another “jazzy” version of Santa Clause Is Coming To Town. However not all seasons related albums fall into this category and the latest release from UK vocalist Collette Cooper is definitely one of these rare exceptions. 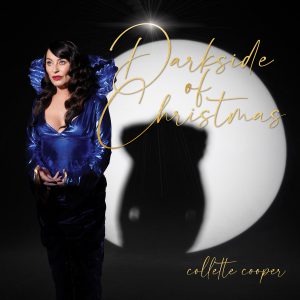 With “Darkside Of Christmas” Collette provides an alternative take on the deluge of yuletide projects. Reflecting the current political and social environment caused by the impact of national and global events, Darkside Of Christmas takes a more poignant approach to the seasonal album, aiming to recognize the recent difficulties that have been felt by many around the world, touching on themes of love, loss and empathy, tied together with wry wit, edgy humor and outstanding musicianship.

While the theme may at first appear saturnine, Darkside Of Christmas’ ultimate sentiment is an uplifting feeling of spirituality and hope, laced with a devil-may-care party spirit designed to unify those who feel that the hour of ‘forced fun’ is upon them. Songs such as ‘Run Santa Baby’, sees old Saint Nick feeling the pinch of frostbite, while Cooper’s rendition of ‘What A Wonderful World’ sails over the sound of an old honky-tonk piano with the odd broken key, conjuring the essence of a singalong around the fire after a few too many glasses of Christmas spirit.

A more personal sentiment is projected on the Cooper’s original composition “Another Day” – is dedicated to Collette’s best friend Clare Bonham, who unexpectedly passed away in March 2020 (the last time they spent time together was New Year’s Day 2020), while the classic jazz standard ‘It Ain’t Necessarily So’ is given a unique treatment with the addition of the melody from ‘Carol Of The Bells’.

Cooper recruited good friend, Richard Harwood, the principle cellist in the Royal Philharmonic Orchestra (the impact of his contribution is most intensely felt on their version of ‘Silent Night’). Notable jazz musicians such as Andy Davies, Kevin Davy (trumpets), Liam Stevens and James Pearson (piano) greatly enhance the recoding with both their individual and collective dexterity and flair, while the mellifluous tones of The Kings Voices Gospel Choir add vibrancy and warmth.

The final jewel in the crown is the addition of legendary British actor Ray Winstone, who introduces the album by reciting an original poem by Collette Cooper, setting the tone for what is to come.

To celebrate the release of the EP, Collette Cooper will perform her new album, Darkside Of Christmas, along with some favourites from her back catalogue, and will be joined by her incredible musicians, all set in a beautiful Grade II listed chapel in Hampstead. Special guest to open the night will be the outstanding Liam Stevens on piano, followed by the incredible Lifford David Shillingford.

The band for this special performance will feature the most incredible musicians including Liam Stevens on piano, Kevin Davy and Andy Davies on trumpet, Daniel Malek on double bass, Jan Simson on drums, Andrea Rinciari on guitar, and the Kings Voices Choir led by Simon King.

All in all, a night not to be missed, guests will be welcomed with a complimentary glass of festive mulled wine and a very special night of music! All tickets will be entered into a Grand `Prize Draw to win a one night stay at the famous Crown Inn, Amersham. There will also be a chance to win a special Christmas Santa Sack filled with bespoke luxury Christmas presents.

More information and tickets are available below: