The Los Angeles based entertainment event and production company HITKOR today announced its first-ever charity event which will take place over two days in mid-October.

“For this outstanding drumming event, I get to play the title track from the first Krupa album I owned, ‘Drumming Man,’ and that national anthem for drummers, ‘Drum Boogie.’ And what salute to this era would be complete without ‘Flying Home’? The older I get, the more I ‘get’ Gene Krupa, and I’m grateful for this opportunity to play his music as showcased in this terrific arrangement and played by this great big band,” says Peter Erskine.

Tickets are on sale now for day one and day two, only at HITKOR.com. The live streaming broadcasts will be available to the public in more than 30 countries. LIVE tickets are $17.99. ALL ACCESS passes are $19.99 and include bonus, behind-the-scenes content. 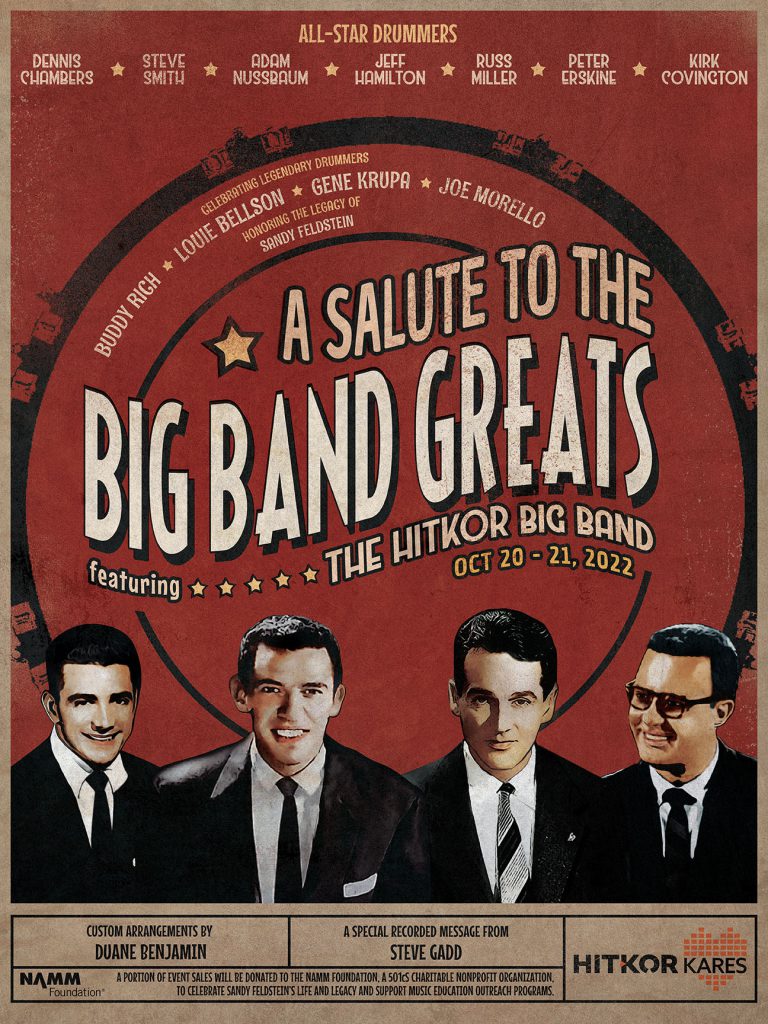 “This is an incredible opportunity to pay our respects to legends that have shaped everything we do as professional players and to be surrounded by tremendous, high-level talent,” says Miller, who will be performing and is also CEO of HITKOR. “It is an absolute thrill to be able to raise money for music education in honor of my mentor Sandy Feldstein.”

The NAMM Foundation is a supporting organization of NAMM, for which Feldstein has served on the board and its predecessor organization, the International Foundation for Music Research, that spearheaded leading music research that underpins our understandings about the profound impact of music learning. A drummer, percussionist, mentor, author and educator with more than 700 books and pieces published, Feldstein is also a member of the Percussive Arts Society’s Hall of Fame, and was inducted alongside drumming legend, Steve Gadd.

“Sandy Feldstein left an indelible mark across the field of music as is celebrated by this incredible event; his memory and legacy continues to inspire so many to join together to celebrate the joy of making music today,” said Mary Luehrsen, Executive Director of The NAMM Foundation. “Support for this event will be felt in the creation of new music makers that will inspire the sound of the future.”

Ticket buyers can tailor their viewing experience via the multicam KORplayer and will also have extended access to the concert footage for a minimum of one year. Viewers can expect premium video while immersed in HEAR360 Spatial Audio and become “directors” of the show by choosing different camera angles and customizing what they want to see when viewing an Encore performance. Using their mobile device, they can explore the stage in dynamic 180-degree virtual reality. A LIVE ticket admits viewers to the main live stream event, while the ALL-ACCESS pass upgrade includes bonus video content prior to the main show.

Follow @HITKOR and visit www.hitkor.com for more information including the upcoming show schedule.