Jazz Is Dead, the label founded by composer and arranger Adrian Younge, and Ali Shaheed Muhammad, have announced the release of their 14th edition featuring Henry “The Skipper” Franklin. The album is set for release on the 16th of September. 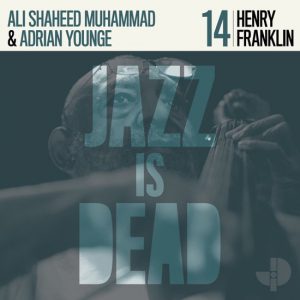 Laying in the bouquet of any jazz ensemble of any era is the bass. A compass on which the rest of the ensemble relies on, the bass is the provider of the heartbeat, the rhythm, & feel. There is one such maestro whose own legacy, much like their instrument, has been obscured while remaining ever present. Through a closer listen it becomes evident that the music and career of Henry “The Skipper” Franklin is among the most luminous of any jazz artist.

A native of Los Angeles, Henry Franklin came of age while the city was producing a crop of exciting jazz talent. As a teenager, Franklin took lessons from bassists George Morrow and Al McKibbon. Morrow had logged sessions with Max Roach and Sonny Rollins, and McKibbon is best known for appearing on Miles Davis’ Birth of the Cool. Paul Chambers became Franklin’s idol, whose subtle style he yearned to emulate. While still a teenager, Franklin began to perform with a young Roy Ayers, and soon could be found sharing stages with trailblazers like Ornette Coleman and Don Cherry, as well as Boogaloo king Willie Bobo. One of his earliest studio appearances, with South African trumpeter Hugh Masekela, netted the hit “Grazing in the Grass”.

Franklin’s solo output is best remembered for his two solo outings with the Black Jazz label- “The Skipper” & “The Skipper At Home”. Together, they form one of the most compelling diptychs in the entire post-bop canon. The first veers from kinetic workouts to Sanders-esque meditations, shifting stylistically but grounded by Franklin’s restraint. On the follow-up, the lines between genre blur even further, teetering between chaos and comfort. Here, as well as on equally important entries from labelmates Gene Russell, Calvin Keys, and Doug Carn, Franklin reconfigures the bass into the emotional foreground, meshing rhythm with melody.

Franklin’s lasting impact on jazz can be evidenced by the long list of legends who sought him out for tours and recording sessions. Throughout his career, he has performed and recorded with Bobbi Humphrey, Freddie Hubbard, Hampton Hawes, Pharoah Sanders & Woody Shaw. In 1979, he collaborated with Stevie Wonder on the sprawling “Journey Through the Secret Life of Plants”, earning another hit record. Young bassists today, such as Eric Wheeler, emulate Franklin’s melodic and fluid style. Franklin has appeared on songs sampled by A Tribe Called Quest, The Avalanches, Masta Ace, Earl Sweatshirt, Black Sheep, and Gang Starr, to name but a few. Prior to the pandemic, one could hear Franklin performing at La Sierra University, with legends like Airto and Azar Lawrence making guest appearances. Recognized by his peers and contemporaries, Franklin’s entry for Jazz Is Dead gives the living legend his flowers and recognizes the contributions The Skipper has made as one of jazz’s most influential heartbeats.

More information of this and other releases from Jazz Is Dead can be found at their website.