Can a debut album still make or break an artist? This question has come to mind when listening to “Winterspring,” a new release and the debut of the jazz vocalist Allison Wheeler. 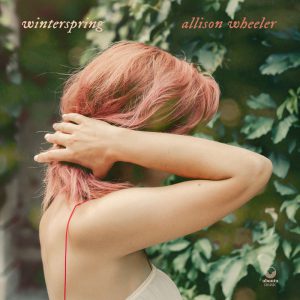 “Winterspring” released on Ubuntu Music, July 2022, has eleven songs (with eight) by Wheeler. It was recorded in July 2021 in a studio outside of Prague with jazz musicians that she has been playing with for the past few years. Wheeler is from Monterey, California, but living in Prague.

In 2018, Wheeler was voted “Undergraduate Jazz Vocalist of the Year” by Down Beat Magazine. This was just at the time she was completing her music studies in “jazz voice” at the University of Northern Colorado. Shortly after this, she moved to Prague without any set plan.

While Wheeler states that she is most influenced by Regina Spektor, Fiona Apple and other pop vocalists, and not necessarily jazz singers, her approach and sensibility to each of the songs is closest to Joni Mitchell’s truest jazz album “Mingus.” A relaxed and melancholic mood, and modest yet majestic tone reverberates throughout, or it recalls the slow swing of Anita O’Day.

Beyond her staggering and warm voice, a significant part of the magic on “Winterspring” is due to the songwriting and arrangements of Wheeler (with her group), such as her reworking of “Simply Good” by Richard Rogers from The Sound of Music, or on her composition “The Hazelwood,” with lyrics by Yeats from The Song of Wandering Aengus.

Wheeler’s own lyrics are poetic and slowly drawn out like slowly plucked rose petals in “Lines.”

Where’s the point
of losing yourself?
the lines are drawn
so thin
I long to be where it’s warm
where dark won’t follow
the lines I’ve drawn,
and I’ll be
on my own…

Wheeler is not afraid to embrace childhood fantasy as on “A Dream is a Wish,” with lyrics from Cinderella. Their standout “Love” is their craftiest gamble by rearranging a song from Disney’s Robin Hood (song and lyrics by Huddleston and Burns) interwoven with hidden fragments of “A Dream is a Wish,” Wheeler has a sure-fire gem, and at least their show-stopper with this one.

The musicians in her quartet are all exceptional if not outstanding, including Daniel Bulatkin on piano and keyboards; Max Makagonov on double bass; Petr Nohavica on drums, and featured guests David Doruzka on guitar, and Lubos Soukop on soprano saxophone and clarinet.

Since this is a debut album, it is possible that “Winterspring” will only be heard in the immediate future by a limited and lucky few; however, with a similar standard of further compositions and recordings of Allison Wheeler, an audience of far wider proportions should be bound to happen.