Mack Avenue Records recently announced the upcoming release of pianist and composer Emmet Cohen’s new album “Uptown in Orbit” scheduled for October 28th, 2022. More than two years after creating a space for artists to commune and create during the Covid-19 pandemic lockdown, the new release is inspired by connections he and his trio helped foster in the midst of devastating isolation. 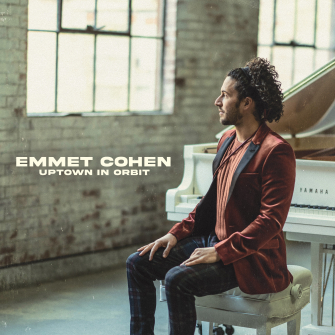 Last week Cohen has also shared the lead single from the album “Finger Buster,” originally written and popularized by Willie “The Lion” Smith. Speaking of the tune Cohen said “Finger Buster is one of the timeless American stride pieces. It’s usually heard as a solo piano number, but here we have orchestrated the classic solo piece for piano trio format. We went one step beyond as well, utilizing an old school tape machine in certain sections to help us time travel with the listener.”

Following his 2021 Mack Avenue Records debut Future Stride, Uptown in Orbit celebrates sacred connections and an evolution of sound among Cohen and his trio mates, bassist-composer Russell Hall and drummer-producer Kyle Poole. Recorded at Sear Sound in midtown, the album equally serves as a vessel for new energy from trumpeter Sean Jones and saxophonist Patrick Bartley.

“This period gave me time and space to explore collaborations with such a broad range of musical artists. “Through that experience, I learned a lot about myself and, with the trio, discovered what makes certain moments unforgettably special. I’ve been inspired by the myriad of musicians who have helped us evolve our concept and reach for a deeper purpose in our art” recalls Emmet.

Cohen and his trio live and play by a truth they hold to be self-evident: “All music, and art for that matter, is modern. If you are creating in the moment, it is current, and lives and breathes alongside the creator.” Uptown in Orbit addresses this philosophy through repertoire as well as production. The record opens on Willie “The Lion” Smith’s “Finger Buster,” traditionally a solo piece which Cohen acknowledges as a rite of passage for pianists. The selection, whose composer he considers a relentless individualist, features Cohen’s lyrical precision around a folkloric stride vocabulary, as well as Poole’s contemporary production aesthetic. “Kyle’s an incredible drummer, but he’s also a unique, captivating producer. We wanted to feature both sides of his artistry.” Poole lends his engineering skills to the title track reprise, as well as Cedar Walton’s “Mosaic,” the latter spotlighting what listeners have come to revere as his at once fiery and sensitive solo improvising.

The trio members have lived, worked and played together for so many years, they often look to outside forces to activate new inspiration in their expressive spaces and help evolve their sound. “There are certain textural and compositional things that can happen with a quintet,” says Cohen, who similarly featured trumpet player Marquis Hill and saxophonist Melissa Aldana on Future Stride. “These musicians can pull new ideas out of the piano trio context, and there was just magic with both Sean and Patrick.” The two artists hadn’t played together before the record date, but the spark was instantaneous. “Patrick and Sean both have a holistic approach and knowledge of the lexicon, from Louis Armstrong and early sounds to the current expressions our peers are experimenting with. That’s inspiring for us, and it’s exactly what we set out to explore on this record. We can all go in almost any direction, and it leaves so many options for collective creation.”

Inside his Edgecombe Avenue apartment, the Miami/Jersey native often reflects on the significance of his Harlem neighborhood and the music that resonates across the block when he and his fellow artists come together to play. Early in the pandemic, Cohen started a weekly gig in his apartment called “Live from Emmet’s Place” — only about eight guests can comfortably attend (by invite-only), but the livestreams have amassed thousands of viewers around the world. One video featuring Cyrille Aimée has over 4.7 million views on YouTube, and The Guardian recently spoke with Cohen about the performances which they describe as “the most highly watched regular online jazz show in the world.”

For Cohen, the album title track contains multitudes. The composition presents a forward energy of bonded expressions, spotlighting each artist’s individual yet like-hearted sounds. “Living here on Edgecombe,” says Cohen, “where Duke lived and where so many of our heroes gathered to make music together, it’s really brought me closer to that ancestral connection. And of course, we’re honoring Duke’s recording Blues in Orbit. Putting the music and the musicians in orbit has been a great blessing. This record aims to celebrate this beautiful experience and propel the music further into the future, and into many far reaching orbits.”