Charles Lloyd to release second album in his Trio of Trios series.

On September 23, Charles Lloyd will release Trios: Ocean, the second album in his Trio of Trios series, an expansive project that presents the legendary saxophonist and NEA Jazz Master in three different trio settings.

Trios: Ocean, which features Lloyd with pianist Gerald Clayton and guitarist Anthony Wilson, was previewed last Friday with the single “Jaramillo Blues” and you can find this on our New Release playlist on Spotify.

The first album in the series, Trios: Chapel featuring guitarist Bill Frisell and bassist Thomas Morgan, was released on June 24, and the third, Trios: Sacred Thread featuring guitarist Julian Lage and percussionist Zakir Hussain, will come out on November 18. The three albums will be released individually on vinyl and CD and can also be ordered as a 3-LP vinyl boxset exclusively on the Blue Note Store. 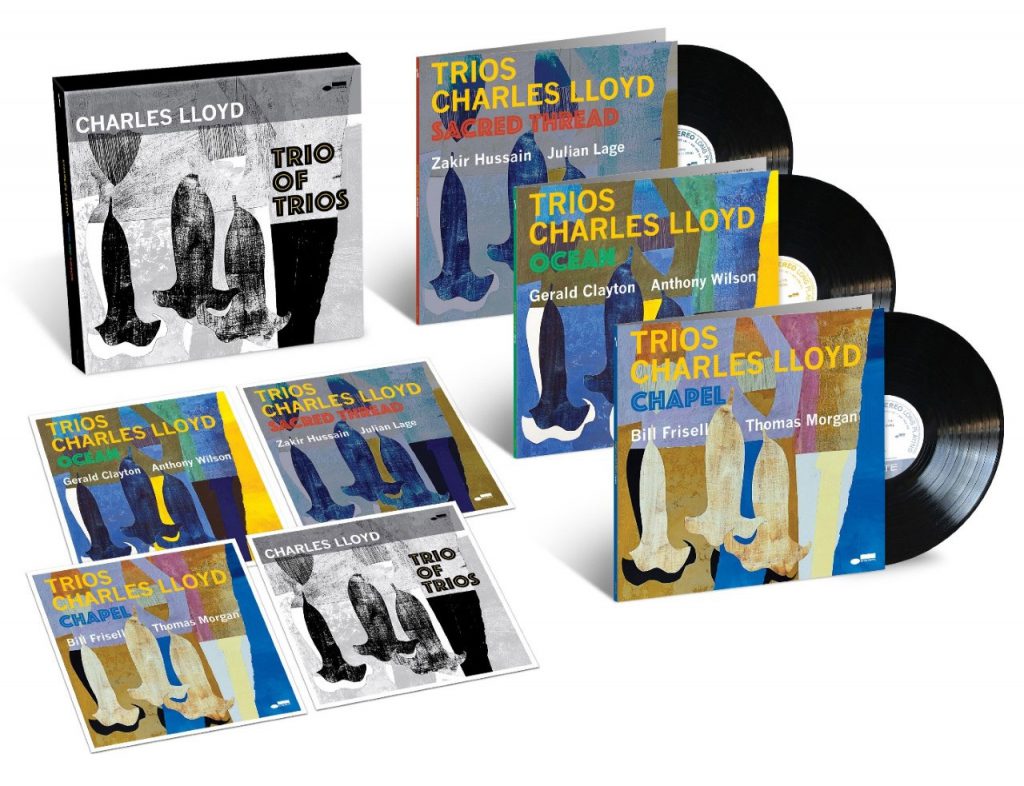 The Trio of Trios vinyl boxset comes in a hardcover slipcase with four lithographic prints featuring the three striking album covers by Dorothy Darr and a signed lithograph of the box set artwork. Fans who order now will receive the slipcase, lithographs, and Trios: Chapel vinyl with the subsequent albums delivered upon their release.

The Ocean Trio was recorded in the 150-year-old Lobero Theater in Lloyd’s hometown of Santa Barbara, California. It was live streamed without an audience on September 9, 2020, during the first year of the global pandemic. Lloyd was joined by Gerald Clayton on piano and Anthony Wilson on guitar, both sons of famous musician fathers — Gerald is the son of West Coast bass legend John Clayton, while Anthony is the son of celebrated bandleader, trumpeter, and composer Gerald Wilson, in whose big band Lloyd once played when he moved from Memphis to study at the University of Southern California when in his teens.

The blues have always been woven into Lloyd’s musical vocabulary, its influence sometimes overt and sometimes covert, both occurring in “Jaramillo Blues.” The piece—which is dedicated to the painter Virginia Jaramillo and her husband, sculptor Daniel Johnson—can be traced back through a timeline that leads back to Lloyd’s teens when he played alongside such blues masters as Howlin’ Wolf, Bobby ‘Blue’ Bland and B. B. King. This is a blues of an optimistic hue with Clayton’s bright, rootless chords providing an introduction to Lloyd’s flute, who sets mood and tone of the performance.

Lloyd has long been a free spirit, master musician, and visionary. For more than 6 decades the saxophonist and composer has loomed large over the music world, and at 84 years old he remains at the height of his powers and as prolific as ever. Early on, Lloyd saw how placing the improvised solo in interesting and original contexts could provoke greater freedom of expression and inspire creativity, and throughout his remarkable career he has searched for alternative ways to frame his improvisational skills.

More information on this can be found on the Blue Note Records website.