Recently I had the pleasure of attending the 2nd edition of the Sicilia Jazz Festival in Palermo. As often happens when attending a festival some of the most exciting performances happen not on the main stage but in the smaller venues. This was certainly the case in Palermo when I managed to catch the second half of a performance of the Gianni Gebbia Magnetic Trio featuring Mederic Collignon in the Teatro santa Cecile.

In my recent festival review, I wrote of this concert “On leaving the theatre I realized I had just witnessed perhaps one of the most creative concerts I’ve see in my, far to many, years in this business” and I was not the only one with this opinion. Many of my colleague journalists who were also present at the festival felt the same. As I mentioned above, I was only able to catch the second half of Gianni’s set and I have to admit, afterwards I was kicking myself, but choices had to made. Well, surprise surprise! a few days ago Gianni dropped me a message on Facebook with a link to his Bandcamp Page where a recording of the full set is now available for download. 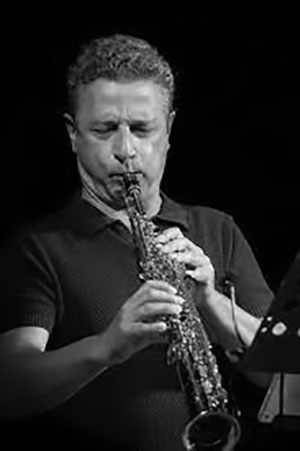 The Gianni Gebbia Magnetic Trio consists of Gebbia on soprano saxophone together with bassist Gabrio Bevilacqua and Carmelo Graceffa on bass and drums respectively. For this performance Gianni invited French trumpet player, Mederic Collignon. My colleague journalist, AJ Dehany described Collignon in his review on London Jazz News as the “Wild man of the cornett, flugelhorn and other avant-garde innovations of electronics, rubber tubing and vocalization.” Gianni founded the Magnetic Trio in 2014 and since this time the trio has performed over 100 concerts however, including this live recording there are only two albums of the trio available, both exclusively on Bandcamp on Gebbia’s own label “objet-a”.

Mederic Collignon’s collaboration with Gianni dates back to the 90’s. Gianni explained “… I first invited Mederic to Palermo in the 1990’s to play a duo project accompanying some silent movies. We played in the courtyard of an old palace in the historical center of Palermo. Then in 2015 I once again invited him, this time through the French Institute and we played some gigs around the city. When looking for a guest to play with the trio at this festival, his name naturally came to me. His talent to be both inside and outside while maintaining a deep jazz feel along with originality was perfect for what we wanted to do.”

The program was billed as an “Ommagio a Sidney Bechet”, yet if you are looking for a program of swinging 1930’s New Orleans jazz then forget it. The four explore the far reaching influence of Bechet through a program of original compositions and a singular rendition of Bechet’s most iconic song, “Petite Fleur”. There’s no doubt that Sidney Bechet is one of the seminal figures in the history of jazz, Ellington is quoted as saying “Bechet to me was the very epitome of jazz” and in my opinion, I believe it’s possible to say that he was responsible for putting the soprano sax on the map.

Before writing this review, I reached out to Gianni to clarify a few points. It was during this conversation that I learned that it was the formation of the Magnetic Trio in 2014 that inspired Gianni to focus solely on the soprano sax. When speaking of the inspiration behind this set, Gianni explained “…. without him (Sidney Bechet) there would not be such a deep history of soprano saxophone players in jazz. So when the opportunity of playing at the Sicilia Jazz Festival came up, I had the idea to dedicate the project to Bechet and work into the set some re-interpretations of his tunes. The project is mostly dedicated to the spirit and sound of Bechet rather than just play his tunes. I had the idea of developing some of the techniques he pioneered and his approach but in a contemporary way avoiding the usual “Manouche“ or “Dixie’ style interpretations.

So, let’s take a look at the album. The program kicks off with one of Gebbia’s origional tumes “Prospero”. The track opens with a repetitive ascending melodic statement played by Gebbia that is later systematically ripped apart forming the theme. Mederic Collignon then opens the solo’s in conversation with bassist Gabrio Bevilacqua before handing the reins to the groups leader. The groove of this track is relentless with both Gabrio Bevilacqua and Carmelo Graceffa standing strong over the odd meter feel with Collignon’s occasional piano comping adding extra harmonic texture. In particular I enjoyed his vocal improvisation that hit’s you out of the blue. “Satieology”, obviously a nod to the French composer Erik Satie, opens with an arco bass introduction that persists throughout like a ticking time bomb. Bevilacqua either played this ponticello or it’s the sound of the pickup through the desk, but the sound is quite metallic and this really does add to atmosphere by exaggerating the harmonic overtones. Above this Mederic spars with Gebbia trading 16th and 32nd note bursts and the odd primal scream. 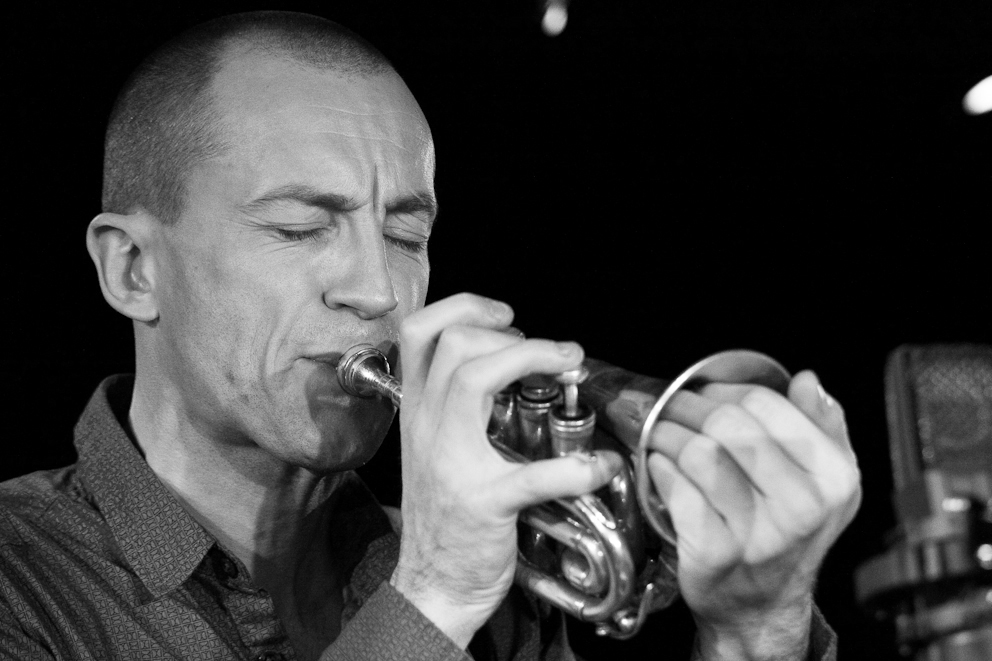 The following track titled “Same Brushes” is somewhat freer in nature and at times perhaps a little reminiscent of Coltrane’s “Afro Blue” live album. This track, mostly running at a lighting speed, features amazing solo work from Mederic on trumpet and Gianni on soprano sax. Moving on to the next track, “Nievski in Love”, the feel quickly settles into a 4/4 implied rock grove and features a melody touching on some middle eastern tonality.

Following this the group tackle Bechet’s “Petite Fleur”. I loved the way in which the group paid their respects to this old classic. To quote the words of possibly the most famous of Vulcan’s “It’s trad jazz Jim, but not as we know it”. The album closes with “Francesco e il Sultano”, a fast up-tempo track featuring a highly effective bass solo from Gabrio Bevilacqua. The track is somewhat schizophrenic with a number of long meditative passages placed over the frantic swing background and indisposed with rapid fire solo’s from both Gianni and Mederic.

This album is not for the faint hearted, It requires a listener with the guts and fortitude to join these four amazing musicians and follow them on a journey that threatens to go off the rails at any time, but never does. Highly recommended (but only for the brave). The album is available exclusively on Bandcamp and can purchased for $6- however you can always choose to pay more.

On a final note, while the group were in Palermo they also went into the studio to record a full album. There is no date set as yet for it’s release however, keep an eye out here on Jazz In Europe for more details on this.