Earlier this year the Zurich Jazz Orchestra released the third and final album in the trilogy of recordings conducted by and featuring compositions and arrangements from Steffen Schorn. For frequent readers of Jazz In Europe, Steffen Schorn is no stranger, so with the release of this album I found myself compelled to reach out to Steffen to find out more.

Just prior to the outbreak of the pandemic Steffen made the choice to step down as the musical director of the Zurich Jazz Orchestra and to take the position as composer-in-residence. The three albums that form the trilogy will be the last albums from the band conducted by Schorn. While the pandemic in effect closed down the cultural sector for close on two years, the Zurich Jazz Orchestra used this opportunity to find a replacement for Steffen and in early 2021 the band announced that American expat, Ed Partyka will take over the reins as musical director.

Formed in 1995 the Zurich Jazz Orchestra has rightly earned it’s place among Europe’s top professional Big Bands. Around the turn of the last century the band took its first major steps it’s development with Stefan Schlegel taking over the musical direction in June 2000 and Bettina Uhlmann assuming the management and administrative direction. It was also in this period that the ZJO cemented it’s collaboration with the iconic Zurich venue, Moods Jazz Club providing the band with platform for regular concert programming. During the ensuing period the band produced three albums (“Beyond Swiss Tradition” (2005), “New Plans” (2008) and the 2012 release “Song”) and began building the bands international profile. 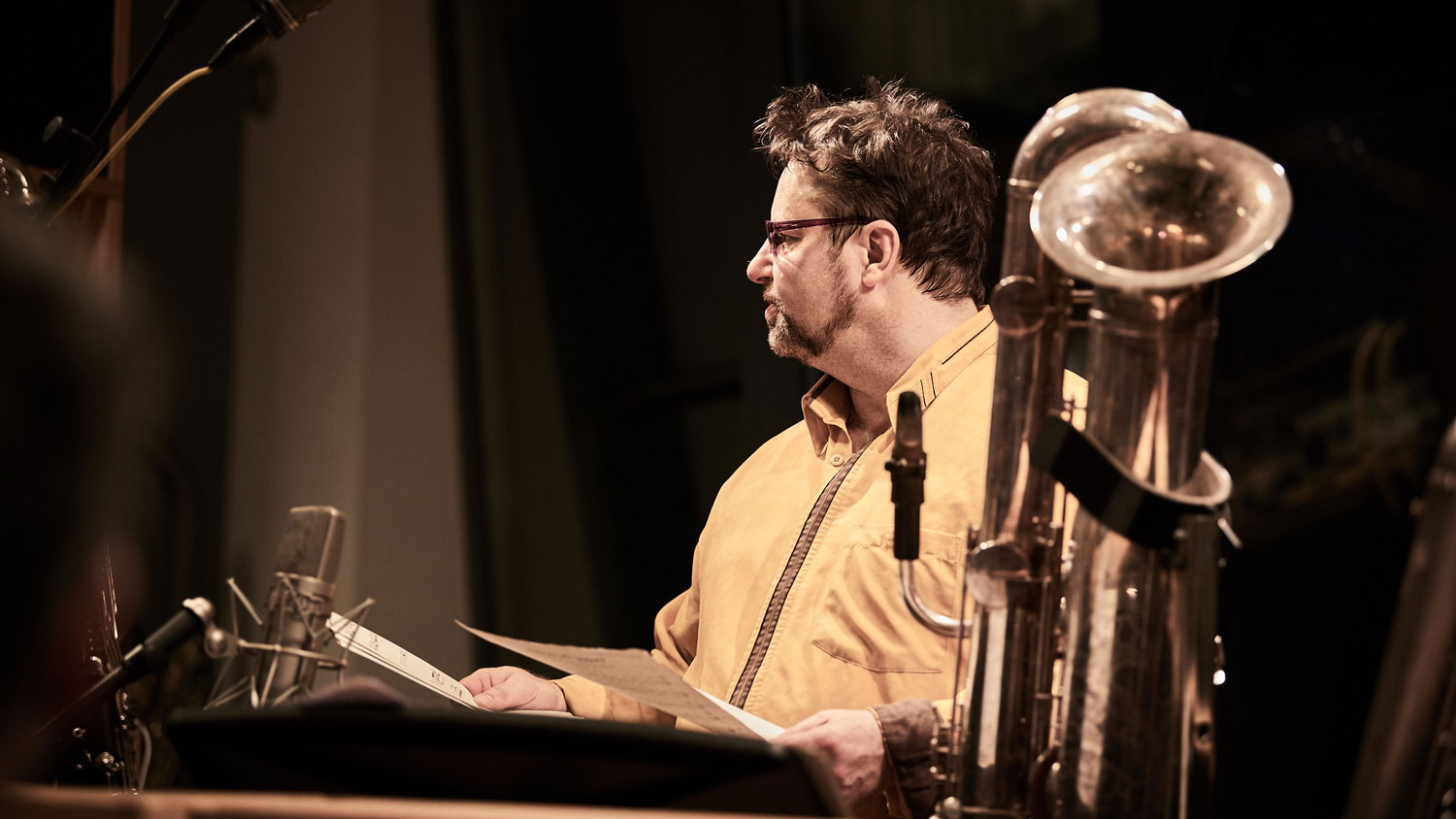 During his six year tenure as musical director of the band, Steffen further oversaw the continuation of the bands artistic development. During his first three seasons as musical director, Schorn delivered over 100 different arrangements. Each concert had a complete new program and Steffen admits keeping up this pace had been adventurous and at the same time extremely demanding. The positive side of this was that it forced a sense of “alertness of the moment” within the band. In 2017 the band entered the studio to record their forth album and the first release in a trilogy under the direction of Steffen Schorn titled “Three Pictures” (2018) with the second in the series “Dedications” following in early 2021. Both albums not only received critical acclaim but also demonstrated the virtuosity encapsulated with the Zurich Jazz Orchestra.

As mentioned above, toward the end of 2019 Steffen retired from his role as musical director of the Zurich Jazz Orchestra to continue on in the position of composer-in-residence. Speaking of this Steffen stated: “I loved working with this band and when I first took on the position it came at just the right time. I still had a lot of items left on my musical bucket list and I knew this band had what it takes to achieve this.” With a full time teaching position as head of jazz department at the Nuremberg University of Music and many other musical commitments throughout the world it became more and more difficult for Steffen to manage his schedule. “I was constantly travelling, in fact, at one point I was travelling more than 1000 kilometers a week. I wanted to concentrate more on my writing and arranging so taking the position as composer-in-residence made sense to me.” He went on to say: “My new role as composer-in-residence now gives me the opportunity to take a step back and dive deeper into the inner world of emotions, memories, feelings and write brand new compositions as well as taking older pieces out of the treasure trove and create fresh custom-made orchestrations for the ZJO.”

Steffen’s family came from the former East German DDR. He told me that he regularly visited his aunt and grandparents in the east and at that time it was compulsory to exchange 25 Deutsche Marks into East German currency each day as a condition of entry. The interesting thing was that in the DDR there was almost nothing to spend it on except for LP’s. “I bought a lot of records with Big Band music, Glenn Miller, Duke Ellington, but also symphonic music with eastern European composers as Glinka, Borodin, Tchaikovsky, Stravinsky and Bartók.” he went on to say. These wide ranging influences from his youth are still today to be heard in his compositions and arrangements.

Speaking of influences, Steffen mentioned that one of his most influential albums was the seminal recording of Miles Davis with the Gil Evans orchestra’s take on Gershwin’s “Porgy & Bess”. I asked Steffen what impact Gil Evans orchestrations had on his development as a composer and arranger. He said “Of course those legendary recordings make a lot of impact on me! Gil´s writing is so spiritual, colourful, structured and yet unpredictable and always directly from the heart.” He went on to recall an interesting anecdote from his student days: “I clearly remember the moment as a student when I was experimenting with some self-constructed exotic scales and see what sounds I can get out of them. One example was a scale where I had an E, F, and F#, so I constructed an orchestral spread voicing that I thought could sound hip. At that time I had no possibility to try it out, and of course this “cluster” was kind of “forbidden” according to traditional arranging rules. In the same period I transcribed “The Duke” from the LP “Miles Ahead” and found out, that Gil Evans had used the same “forbidden” voicing already 50 years ago! – That really gave me a huge kick to move on.”

Moving back to the subject at hand, the final album in the trilogy, I asked Steffen about the material on the album and some background. He explained “Well, as you can gather from the albums title, To My Beloved Ones, each of the pieces on the album is dedicated to a person or place that is very special to me.” Take for example “Tango”, Steffen explained that this track, while not a true tango in the literal sense, is more of a metaphor and declaration of love for the South American continent, its people, culture, and natural beauty. “Die Tochter Des Tyrannen” (The tyrant’s daughter) is Inspired by the unapproachable beauty of the island of Crete.

“For Me Is Just Now Anytime…” truly fits with the theme of the albums title and is dedicated to Steffen’s wife, cellist Ulrike Zavelberg. Steffen explained “For Me Is Just Now Anytime…” was on my answering machine one day after our first meeting at a student concert with jazz band and string orchestra along with the words “…see you sometime…” It was like a bolt out of the blue, Ulli had entered my life. After 30 years together with it’s ups and downs, I thought it i was high time that this piece finally appears on CD in a new big band version with the Zurich Jazz Orchestra!

Inspired by the book “The 13 1/2 Lives of Captain Blue Bear” by Walter Moers, first published in Germany in 1999, Käpt´n Blaubär is in fact a declaration of love for the manifestations of the soul, the omnipresence of imagination and of universal possibilities. This may sound a little esoteric but for those familiar with the book that celebrates the unbroken art of living while mastering the most extreme challenges, the link will appear obvious.

The final tack on this album is not only the title track for this release but also the closing statement from the trilogy. The trilogy began with the opening piece on the album “Three Pictures” titled “Eye of the Wind”. The piece was finalized by Schorn during the journey to his 1st concert with the Zurich Jazz Orchestra. “To my beloved ones” was premiered at the last concert the band performed with Steffen in the role as musical director and conductor and with special guest Dave Liebman. Steffen recalls “…It was exactly 17:59 and 59 seconds when the sheet music for this piece was sent to the Moods jazz club office to have the parts printed, the band and Dave were already sitting ready for the 18:00 sound check…. As always, the orchestra made the music sound brilliant in no time at all. In essence we can see this piece as one of the two bookends to the trilogy.

For more information on the the Zurich Jazz Orchestra please visit their website. The full trilogy of albums is available on Mons Records and can be found on all of the usual streaming platforms.