Earlier this year Swiss double bass player Dominik Schürmann released his latest CD titled Moons Ago on the German jazz label Mons Records. The album features 12 original compositions that stylistically pay homage to the jazz legends of the 1950’s and 60’s according to the press release and this is certainly the case. The group of musicians gathered together by Dominik without doubt understand this tradition intimately and this can be heard in every note on this recording, no cliché just great swinging jazz performed superbly. 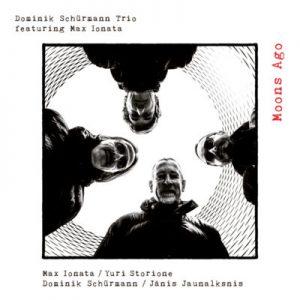 Dominik Schürmann is the son of jazz pianist Niggi Schürmann and with this in mind it’s no surprise that he discovered the music at a young age, starting with piano lessons at age six before switching to bass some years later. Currently Schürmann is a fixture on the Swiss jazz scene working both as a side-man and leader. During his diverse career he has participated in theatre and musical productions, appeared on Swiss TV and radio and as a side-man, participated on over 50 CD productions. As a leader, his 2016 release, “Upswing” became one of the most successful Swiss CD releases of that year. Joining Dominik on Moons Ago is Max Ionata on Tenor Saxophone along with pianist Yuri Storione and rounding out the line-up is Latvian drummer, Janis Jaunalksnis.

Starting at the top, the album opens with a medium up Samba titled “Butterflies”. The track features an easy to digest melody that gives away to a wonderful solo from pianist Yuri Storione before passing the baton to Max Ionata for an equally impressive chorus. The following track, “The End Of A Bug Affair” is a play on words referring to the standard made famous by Frank Sinatra, The End Of A Love Affair. To provide a little background on this track, Schürmann stated that the song was “… in the summer of 2020, the quiet hope that the Corona pandemic would soon come to an end was omnipresent. It is now common knowledge that this wish did not come true. However, we also know that everything has an end, including the “Bug Affair”. He went on to say “In keeping with the theme, the song conveys a certain melancholy, but also contains a lot of confidence. It’s often common place that recordings where the bass player is the leader tend to overflow with bass solo’s, however this is not the case with this album and one should note Schürmann’s short but well constructed solo on this track as well as a beautifully melodic solo on the following track “Autumn Breath”.

On Moons Ago you will find a number of up-tempo swingers such as “Heureka” and “Banana Dog” along with the moving ballads such as the aforementioned “Autumn Breath” and the title track “Moons Ago”. The Latin Samba feel of the albums opening returns with “Ramba Samba”. The track’s title is a play on the German term “Ramba Zamba” that eludes to process of stirring up excitement and this is certainly the case here, especially in the solo chorus by pianist Yuri Storione.

Saxophonist Max Ionata is one of those Italian musicians that enjoys substantial recognition both in Italy and abroad and his performances on this recording demonstrate why this is the case. His contributions to almost every track in this set go a long way to defining the album however, the true power of this album in in the ensemble. Schürmann and drummer, Janis Jaunalksnis form a formidable rhythm section and fellow Italian, pianist Yuri Storione is without doubt one to watch.

I enjoyed this album a great deal. The sound quality is superb as are the performances and I would recommend this album to anyone looking for a jazz recording that channels the vibe of the classic recordings of the 1950’s and 60’s.