Over the last year Tom Remon has created a fine reputation as one of the next generation of UK jazz musicians. A graduate from Middlesex University, and former attendee of the Tomorrow’s Warriors program, Tom has developed a name for himself on the London jazz scene, and is now making his debut as band-leader with this record.

Putting together a solid rhythm section of Mike Gorman and Shaney Forbes, with the addition of Laurence Wilkins on Trumpet; ‘Eagle Peak’ will be the first recording under his own name, and follows his highly acclaimed debut album ‘Duality’ — a duo album featuring the legendary guitarist, Jim Mullen which was release last year in March, 2021. 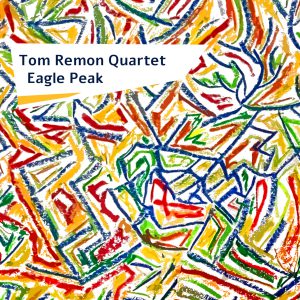 Wilkins is another Tomorrow’s Warriors alumni. “We were both in Binker Golding’s ensemble,” says Tom. “Laurie plays the hell out the trumpet, with a really strong sound. Always with in the moment, with incredible ideas, his playing continues to inspire me”.

Remon’s arrangement of the Cole Porter standard gives everyone in the band a chance to stretch out in their respective solos. This spirited version of ‘Just One Of Those Things’ is a fast passed waltz. The tonality is in Major, as opposed to the original Minor key. Gorman’s solo is a particular highlight. His crunchy organ tone his expressive and his playing is purposeful.

This album not only showcases Tom’s talents as a gifted guitarist, but also as a talented composer. ‘Eagle Peak’ offers four Remon originals, plus a contribution from Mike Gorman with his tune, ’When I Grow Up’ – originally recorded for a Jim Mullen album in 2005.

‘Five for Sensei’ is a contrafact of the jazz standard, ‘Alone Together’. The composition is dedicated to Tom’s Soka Gakkai mentor, Daisaku Ikeda. Reduced to the Trio format, this tune highlights the acute connection these musicians have with one another.

The Donald Byrd tune, ’Fly Little Bird Fly’ zips along nicely. This track is short and sweet, with the musician trading solos throughout the form. Wilkins bringing the tune in at the very end.

‘One Eternal Bond’ takes inspiration from the Buddhist concept of the eternity of life and the relationships between people. Dedicated to Tom’s good friend, Bernie Holland, the tune represents the connection that Bernie felt in the studio whist documenting the session on his camera.

The title track has been a work-in-progress since Tom’s college days. Taking full form for this recording, ‘Eagle Peak’ is a fast-paced, swinging number which gives each musician an opportunity to shine. Forbes’ drums flow effortlessly under the deftly executed solos from Wilkins, Remon and Gorman. Remon’s guitar tone is clear and resonant. The track concludes with a powerful solo from Forbes, with Wilkins looping the tune’s motif over the top.

The album concludes with ‘Nichiko Hori’. Forbes takes the centre stage on this one with a terrific drum solo. The track fades to solo guitar – Tom’s playing is a nod to West African Mali blues – a pleasing coda to finish on.

‘Eagle Peak’ strives to push Tom in new musical directions, whilst challenging his playing as a soloist. Tom seems to thrive in the organ trio combo, and there promises to be much more music from this incredible line-up.